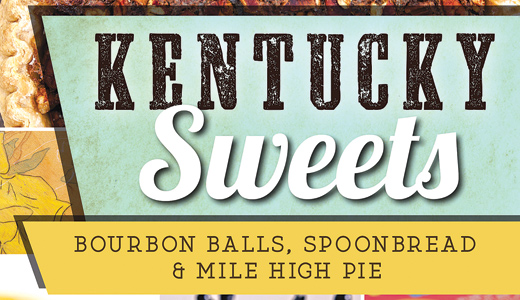 What comes to mind when you think of traditional Kentucky cuisine? Hot browns, burgoo, perhaps the odd squirrel-tail stew? Little do many folks know that our fair state has a long, storied history on the sweeter side of the kitchen, with bluegrass bakers shaping American culinary traditions since the frontier days. This is the story that writer and culinary anthropologist Sarah Baird tells in her new cookbook, “Kentucky Sweets.” The Richmond, Ky., native traces the commonwealth’s culinary heritage from spoonbread to bourbon balls and beyond, weaving together personal anecdotes, interviews and scrumptious, easy-to-follow recipes. As she puts it, “The sugar-laden back roads and main streets of the commonwealth are ripe with stories just waiting to be told. Take a seat, grab a fork and dig in.”

LEO: Where did the idea for this project start?

Sarah Baird: As a culinary anthropologist, I have a deep interest in how food impacts culture and society: the intersections between culture, society and food; how those work together; and specifically, underrepresented or underserved stories about food. I’m also a super-proud Kentuckian, so it’s always exciting for me when there’s an opportunity to present Kentucky to a national audience. In the conversations about food in Kentucky, it usually boils down to hot browns and burgoo, and so many of the desserts that make up the fabric of communities across the state are never discussed. They all have interesting back-stories and display the rich, diverse history of the state. So I wanted to have the opportunity to meet some of those folks who make Kentucky special, explore some of those desserts and, at the same time, spotlight Kentucky history and culture in a way that hadn’t been done before.

LEO: How did you go about compiling the recipes in the book?

SB: I went through hundreds of cookbooks — historically, Kentucky is one of the states with the most community cookbooks per capita — and really whittled it down to the recipes that were representative of Kentucky. Some are obvious, like bourbon balls and May Day pie, but some are a little bit not so obvious, like hickory brittle. From there, I had to test all the recipes, because when you go through a lot of old cookbooks, you run into a lot of “a pinch of this and a dash of that and you have a recipe!” So they all went through a lot of testing and tinkering. Everybody got to be a taste-tester. By the end, everyone was like, “Oh, here comes Sarah with a bunch of sugar for us to eat again!” I’m sure someone 30 years from now will go into a diabetic coma and I’m going to get blamed.

LEO: Who do you see as the audience for this book: Kentuckians celebrating local culinary traditions, or outsiders learning about regional cuisine?

SB: I really saw it as both. There are so many cookbooks out there today, and a lot of them are just like, “Here’s a pretty picture, here’s a recipe, and we’re done.” And I don’t think that’s a good way to go about writing a cookbook: I think the stories behind the recipes are the fascinating component. If you can eat something and know the history and the story behind it, that’s way more fun and way more interesting than just a beautiful recipe. And then you can add your own story onto that.

LEO: With some of these regional ingredients, like pawpaws or hickory nuts, do you think the recipes are accessible for a non-local baker?

SB: I think so. Pawpaws are probably the only product that’s a little inaccessible, because they’re super-seasonal. Hickory nuts are pretty much available everywhere, and people just don’t know how to use them. So I think it’s a cool way to teach folks from outside Kentucky how to use these products that are in stores that they have no idea what to do with. They’re all pretty “Born in the USA” products, but they’re also a little exotic.

LEO: What do you think is the biggest misconception people have about Kentucky cuisine?

SB: That all we eat is KFC and Mountain Dew. Everyone thinks we’re a culture that’s built on this fast-food and soda ideal, and that’s just not true at all. From the frontier time on, we’ve been some of the most scrappy, pioneering, we’re-gonna-get-it-done-local folks of all time, so I think that’s something that gets overlooked in the national story about Kentucky cuisine. Kentucky is between the Midwest and the South, so you have a lot of those influences both coming in and marrying together, and also you have this weird, rugged, we’re-going-to-keep-our-traditions-to-ourselves, we-don’t-need-anyone-to-tell-us-what-to-do attitude even about food. I think that’s a very cool thing and one of the ways that these culinary traditions and histories have been preserved and passed down throughout the generations.

LEO: Do you have a favorite recipe?

SB: I love them all. But I would have to say — recipe-wise, they’re difficult to make, so this might not be the one to make if you’re a beginner — I love modjeskas. I think they’re a super-great treat, and people from outside Kentucky, every time they have their first bite of a modjeska, they’re like, “Oh wow, this is amazing!” So I think it’s a good introduction to Kentucky sweets for folks. I also really, really like the Shaker Lemon Pie, and for a fun beginner dish, the Ale-8 Bundt Cake is really nice.

LEO: So what’s on your go-to Derby menu?

SB: For Derby parties, I like to turn traditional Kentucky classics into smaller versions or versions that have a little bit of a twist on them: little Benedictine BLT finger sandwiches, mini hot browns, a curried burgoo. And then in terms of dessert, you can do the May Day pie as little tarts. People get really into that.