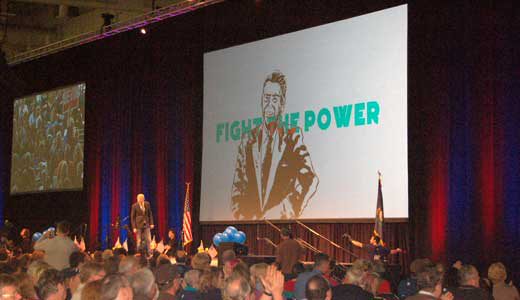 Despite facing overwhelming odds against a victory over 30-year incumbent Sen. Mitch McConnell, Republican U.S. Senate candidate Matt Bevin and grassroots supporters who gathered Saturday in Louisville firmly believe that such a miracle is not just possible, but likely.

Bevin — behind McConnell by more than 20 percent in every poll, as well as campaign funds — now has the helping hand of FreedomWorks, perhaps the largest Tea Party-affiliated organization in the country, who drew over 3,000 people to their FreePAC rally last weekend. The rally’s keynote speaker, radio host Glenn Beck, reiterated his support for Bevin as their great hope, as well as contempt for McConnell, who he portrayed as a “progressive” who is just as dastardly as President Obama.

In 2010, Sen. Rand Paul was able to mobilize such people to win an upset victory over McConnell’s handpicked Republican candidate in Kentucky, but many believe the political landscape has changed dramatically enough that there will be no replay in this May’s primary. Paul — the most popular star amongst his party in Kentucky who is looking to win over establishment Republican support for his 2016 presidential run — is backing Sen. McConnell, hurting the chances of another Tea Party uprising.

Even with the enthusiastic FreePAC crowd, as well as almost universal support from national and state Tea Party groups, Bevin’s chances of victory hinge on whether this political force remains powerful enough to knock off another Republican official in a primary, or whether the Tea Party as we know it has dwindled into the fringe of the political landscape, a noisy far-right relic that no longer threatens the establishment of the GOP.

As thousands gathered to hear FreePAC speakers at Louisville’s downtown Convention Center, Josh Holmes — a National Republican Senate Committee staffer who is focused on McConnell’s re-election — tweeted out, “… Matt Bevin w/ out of staters who say social security a ponzi scheme.” Such a sentiment — that Bevin and his Tea Party supporters are part of the radical fringe — has been a common theme of McConnell’s campaign. However, that description of Social Security has also been used by former Texas governor Rick Perry, who recently endorsed McConnell, as well as Rand Paul, who joined a FreedomWorks lawsuit against the NSA surveillance program and is one of the group’s biggest allies.

The “fringe” label was used to portray Bevin in the week leading up to the FreePAC rally, as he spoke at an event organized to promote the legalization of cockfighting in Kentucky. Though Bevin said he didn’t realize it was a cockfighting rally, in a later interview he defended the “sport” by saying many of the Founding Fathers were also cockfighting enthusiasts. (Many also fought in duels and owned slaves.)

FreedomWorks president and CEO Matt Kibbe addressed the crowd, saying author Saul Alinsky literally dedicated his book “Rules for Radicals” to Satan, which “demonstrated the very nature of progressive rules.” He countered with his “Six rules of liberty,” one of which was highlighted by a video on the screen behind him showing the kindred spirits Ronald Reagan and Martin Luther King Jr. with the words “FIGHT THE POWER.” No mention was made of Reagan saying that King got what was coming to him for undermining the rule of law after he was assassinated, or what Chuck D. thinks about that reappropriation.

Bevin came out to Survivor’s “Eye of the Tiger,” launching into a familiar call to change the status quo in his race, which he called not a battle for the heart and soul of the GOP, but for “the entire electoral process in the United States of America.” Though he curiously avoided mentioning the “progressive” McConnell by name, he clearly called out his opponent’s refusal to debate him.

“Why should your selfishness, your hubris and your cowardice prevent you from speaking to the people and making your case for why you deserve six more years of their salary?” said Bevin, as thousands cheered and held up his campaign signs.

The crowd’s most enthusiastic response was for Glenn Beck, the deeply paranoid conspiracy theorist with a large conservative following around the country, who entered the stage proclaiming, “I’m a Texan for Bevin!”

In a rambling 36-minute speech, Beck outlined his view of American history as one in which progressives are actually secret Nazis and communists who seek to infiltrate our government, schools, churches and media — along with radical Islamic allies — in order to destroy all that is good about America. Such a dystopian future of national socialist tyranny can only be thwarted by his godly supporters in the audience who are the bearers of America’s true history, and brave candidates like Matt Bevin.

Beck opened by referencing the miracles of Jesus in the Bible, proclaiming, “I testify to you today, this is the beginning of miracles.” He said if the faithful and patriotic do their part, they can “stand back and watch the arm of God.” Throughout his speech, a woman in white gloves handed Beck over a dozen items of historical memorabilia he has collected to emphasize his points, though Beck did not wear gloves.

Beck held up the microphone of Tokyo Rose and the cane of filmmaker D.W. Griffith to launch into exposing the lies of the progressive media, as well as scholarly lectures to show that social justice is just a subversive tool to drive God out of schools and churches with progressive tyranny. He held up a binder full of stars the Nazis made the Jews and undesirables wear, saying that career criminals were given police powers in Jewish ghettoes, drawing comparisons to today.

“Think about the world we’re creating now in America,” said Beck. “You always give the power to the worst of the worst, because they’ll enforce it.”

Beck held up a Koran printed by Thomas Jefferson, approvingly saying that he and the founders warned us about the wickedness of Islam and that America would always have to fight against Muslims. He held George Washington’s compass while sobbing, inviting people on stage to touch it. He held up the napkin that Hitler wore during his assassination attempt, declaring, “It leaves you in the realm of insanity.” It was hard to argue with Beck on that last point.

Beck made sure to add that the progressive threat to our values came not just from Obama and the liberal media, but Sen. McConnell, too. “Who here works for Mitch McConnell? Because we know you’re here,” said Beck. “The reason why Mitch McConnell needs to be sent home packing … is because he’s been part and parcel of where we’re headed.”

“Mitch McConnell is as big of a danger to this country as Barack Obama is. The progressive disease is in both parties. Big government is a philosophy in both parties, period. It is antithetical to the American system, period.”

However, Beck proclaimed that Bevin is the type of devout candidate he has prayed for, sticking his neck out in front of McConnell’s attack machine to help bring about “miracles.” “Matt Bevin, I have not met, I’ve talked with him several times and I had a good feeling,” said Beck. “But I am telling you, I believe that man was called of God.”

Though Bevin certainly has the backing of almost every Tea Party group in Kentucky and the nation, the question at this point has to be whether that means as much as it used to. Polls throughout the country show the Tea Party with record low favorable ratings, and even with a united front of support, are there really enough members left to show up on Election Day and oust McConnell?

However, with the most popular Tea Party star, Rand Paul, forging an alliance with McConnell — and McConnell and most Republicans in D.C. voting more and more like hard-right Tea Partiers themselves — perhaps they’ve already won. Just don’t tell that to Glenn Beck and cockfighting fans.