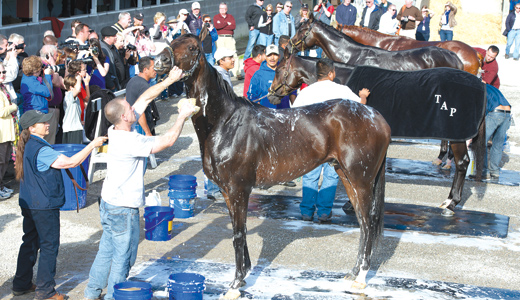 How did a Derby that once seemed so simple get so confusing?

For weeks, this horse handicapper has been going around telling everyone that there are only two horses in the 140th Kentucky Derby: California Chrome, and All the Others.

A neatly wrapped notion to kick off any horse talk: Either California Chrome will win … or he won’t. It’s all about California Chrome. The horse appeared so invincible — and his opposition so ordinary.

Well, now what’s happened is All the Others began arriving at Churchill Downs, and darned if some of them don’t look pretty good. Maybe a bit more capable than previously noted when you check their recent races and analyze previously dismissed pedigrees. Then on the track, stretching their legs over the Churchill dirt, and showing themselves off in the spring sunshine, some of them look very possible.

Which horses have moved up?

Medal Count, Intense Holiday, General A Rod, Danza — those have looked best to these eyes. Maybe Hoppertunity. And one could even make cases for Ride On Curlin and Candy Boy as horses with chances to “hit the board,” based on positive impressions training over the Churchill strip.

Wicked Strong, the winner of the Wood Memorial in New York, is a late arrival, so at this writing, we haven’t seen him at Churchill Downs. Same with Dance With Fate, though he looked sharp winning the Blue Grass. (Some may recall Funny Cide didn’t come in for the 2003 Kentucky Derby until, as we remember, Thursday of Derby Week. By then, everybody’s so sleepy, and you can hardly see the horses for the juleps. But he won — proving this scribe doesn’t have to give his nod of eyeball approval to a horse before it can win the Kentucky Derby.)

But the most important late arrival of 2014 is California Chrome, who gained all his fame, and finished up all his important training in California — then flying on to Louisville as a fashionably late arrival, affording time to the others to get settled and pipe down for his grand entrance.

At his barn in Orange County, south of L.A., trainer Art Sherman Jr. says a plane ride to Kentucky would be nothing for California Chrome — even though the horse was born in California and has never set hoof outside the Golden State, let alone ridden on an airplane.

“I think he’ll walk on that airplane tomorrow morning and think nothing of it. He’ll just get on and go. And when he gets to Churchill Downs, he’ll look around and know he’s at a racetrack and feel right at home. That’s the way he is.”

California Chrome did, indeed, fly without incident to Louisville Monday.

California Chrome is actually the second big horse in Sherman’s life. The first came 59 years ago when he was just a 17-year-old kid, serving as the morning exercise rider for a California horse named Swaps.

Sherman, more of a stable lad than a person of prominence in Swaps’ barn, rode the train with Swaps from Pasadena, Calif., to Louisville. Slept in the same railroad car. Fed, watered and probably talked the ear off the big horse — on Swaps’ way east to run against Nashua in the great East-West rivalry Derby of 1955. Swaps, owned and trained by two California cowboys almost straight off the range, vs. Nashua, owned by New Yorker William Woodward, one of the richest men in the country. Swaps won it. And now, Art Sherman, a horseracing lifer with a modest California stable, returns to Churchill Downs seeking to become, at 77, the oldest person ever to train a Kentucky Derby winner.

Can he and California Chrome do it?

The answer is yes — if he can overcome the lack of stamina in his pedigree. That’s the only chink I can see in an otherwise gleaming chrome armor.

It isn’t so much that California Chrome’s sire Lucky Pulpit carries just a $2,500 stud fee, or that his dam ran for an $8,000 claiming tag. Modest beginnings are OK with this writer. I’m a Democrat! The problem is I also believe in selective horse breeding, and you can look back generations and find very little in the way of bloodlines that suggest stamina. (Swaps is a great, great, great, great grandfather on his mother’s side.)

But that is true for most Derby horses these days. Breeders have bred speed to speed, with old distance blood left out of the race to the yearling sales.

That’s one bit of advantage for Medal Count, who sports a pedigree that does have some vestiges of stamina. Another with a chance of liking the distance is General A Rod.

Intense Holiday worked well over the track on Sunday, looking sharp for his Derby try. Plus, he’s got smooth Johnny Velazquez to ride. Danza is a good-looking prancer, with a puffed-up proudness about him. He could go forward from a big Arkansas Derby, or could also be in for a possible rude awakening in a 20-horse field. Hoppertunity is a professional racehorse that will find a way to earn a piece of it. Mike Smith is the brains in the saddle.

And, of course, do not forget All, the betting parlance name for using every horse in the race in exactas, trifectas, etc. All has a fine Derby record.

Which we’re working on, too. In this space we selected winners I’ll Have Another and Orb for the past two Kentucky Derbies, and I will try to make it three-straight here: The Official LEO Weekly Derby Pick will be California Chrome, with Medal Count and General A Rod next in line.

Betting wise, California Chrome will possibly go off as low as 5-2, which is very short odds. But there are trifectas and superfectas. And we would never recommend not betting. As my friend Myron says, “The next best thing to betting and winning … is betting and losing. The important thing is the action.”

Especially in the Kentucky Derby.

A Kentucky Oaks pick? Untappable looms as an even stronger favorite in the Oaks than Chromy in the Derby. But it looks to us like the perfect opportunity to BET AGAINST — especially in multiple-horse exotic wagers, such as pick threes and pick fours. Narrowing to one pick, let’s go for Unbridled Forever.