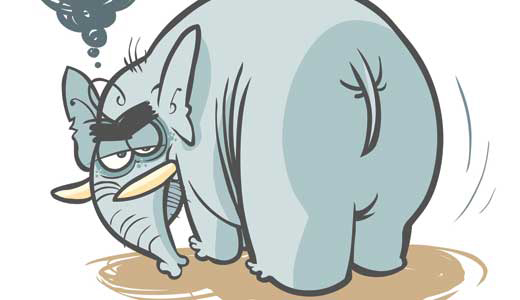 The U.S. House of Representatives passed the budget plan of Budget Committee Chairman Paul Ryan, R-Wis., last Thursday by a 219-205 vote, which Republicans claim will balance the federal budget by 2024 and lead to job growth due to its large tax cuts.

However, the Ryan budget — which was voted against by all Democratic House members — stands little to no chance of making its way through the U.S. Senate, as Democrats have begun to highlight the budget’s dramatic cuts and tax breaks for the wealthy as a clear contrast between the two parties heading into this fall’s midterm elections.

As with past Ryan budgets in recent years, Democrats are attacking the plan for transforming Medicare into a private voucher system and its large cuts to Medicaid and food stamps, pointing to a study by the Economic Policy Institute that found 69 percent of its non-defense budget cuts are to programs that serve low-income Americans. On the other hand, the budget gives millionaires an average tax cut of $200,000, as it lowers the tax rate on the highest income bracket from 39 percent to 25 percent.

The White House’s Office of Management and Budget broke down the state-by-state effects of the Ryan budget cuts in a report released after its passage in the House, with Congressman John Yarmuth sending out what those specific cuts would look like for Kentucky.

According to OMB, in the first fiscal year after the Ryan budget, more than 80,000 Kentucky seniors who have benefited from the closure of the Medicare Part D prescription drug donut hole would be affected, while over the next decade, almost $12 billion in Medicaid funding for Kentucky would be cut, greatly impacting health care for children and nursing-home care for seniors. In addition, the Ryan plan’s repeal of the Affordable Care Act would mean a $792 billion cut to Medicaid nationally under the health care law’s expansion of coverage, jeopardizing the health care of more than 300,000 Kentuckians now eligible for Medicaid.

While Kentucky braces for further cuts in its state budget to higher education and insufficient funding for student aid, OMB says that the Ryan budget would cut Pell Grants in Kentucky by $48 million, meaning 9,560 fewer students would receive such assistance, all while the tuition of Kentucky’s public universities has tripled over the last 15 years. Additionally in Kentucky, 2,770 children would be pushed out of Head Start, 290 fewer special-education teachers would be supported with federal funding, and Title I cuts could result in 460 fewer jobs for teachers and aides supporting almost 60,000 disadvantaged students.

If non-defense cuts are applied across the board, OMB says the Ryan budget would also mean that 18,700 fewer Kentuckians would receive job training, 3,493 fewer low-income families would receive housing vouchers, more than 1,000 children would lose access to child care, and 865 fewer victims of domestic violence would be served through the STOP Violence Against Women Program.

Last week on the House floor, Yarmuth highlighted the groundbreaking research at the University of Louisville that has enabled four paralyzed men to move their legs again, noting that the GOP budget guts the National Institute of Health, whose funding made this research possible. While Yarmuth doesn’t think this budget stands a chance of passing the Senate, he tells LEO the budget shows the priorities of Republicans heading into an election that could give the GOP full control over Congress next year.

“If you are looking at the midterm election and you want to get an idea of where the two parties stand, this is the best way to compare what you’re going to get,” says Yarmuth, who adds that the liberal-leaning Economic Policy Institute’s analysis showed the budget would actually cause the loss of 3 million jobs and reduce economic growth by 2.5 percent in 2016 alone.

Yarmuth put the issue in basketball terms, adding that under the Ryan plan, “Here you’ve got (UK basketball Coach John) Calipari, who makes about $5 million a year, and under the Republican budget, he would get a $700,000 tax cut; at the same time you’re cutting Pell Grants and adding costs to the kids who are supporting the program and the university he represents. While you’re throwing kids off Head Start. … This is truly a debate about whose side are you on. This is the 1 percent versus the 99 percent.”

While most congressional races in Kentucky this fall don’t appear competitive, the 6th District race in central Kentucky may be a contest, though incumbent GOP Congressman Andy Barr is thought to be a solid favorite. His Democratic opponent, Elisabeth Jensen, has hammered away at Barr for his yes vote on the Ryan budget, in addition to a new radio ad hitting Barr for wanting to repeal Obamacare and jeopardize the health care of more than 400,000 Kentuckians who have gained coverage through the state exchange, Kynect.

While the Ryan budget may play a role in Kentucky’s Senate race this fall — presumably between Republican Senate Minority Leader Mitch McConnell and Democrat Alison Lundergan Grimes — both candidates have been mum on the subject. McConnell has voted for Ryan’s similar budgets in recent years, claiming Medicare vouchers will “empower Grandma on the private market.”

Though Grimes certainly isn’t expected to support the Ryan budget, she does claim to support a balanced budget amendment to the Constitution, which would require no budget deficits. However, she has been reticent to go into details on how she would balance the federal budget — like many other issues in the campaign — and how she would go about doing so without dramatic budget cuts or increasing taxes, neither of which are electoral gold.