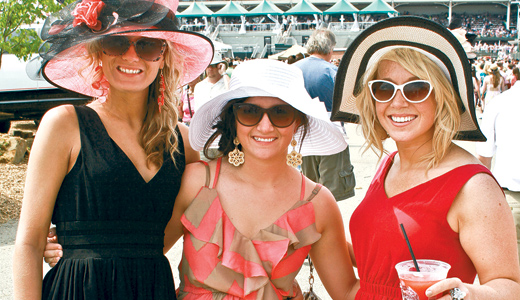 The secret is out: The Thursday before Derby at Churchill Downs is the new day to get your track on. It’s typically regarded as the best day for the locals to enjoy a day at the track without having to pay an absurd amount of money to get in. It’s also a great day to avoid the B-List celebrities you’ve never heard of, long lines and the cesspool of debauchery that is the infield. But alas, this somewhat “normal” day at the track is now known as “Thurby,” and is becoming more and more popular.

General admission is still significantly cheaper than Oaks and Derby, plus there are quite a few incentives to encourage folks to make a trip to the track that day. This year, there will be a bourbon tasting and live bluegrass and country music.

Two bluegrass bands, including The Hart Strings from Georgetown, Ind., will play in the plaza, and the concert will be shown on the big screens, including the brand new 4K video board, the largest of its kind in the world. Track officials say a well-known country artist will headline, but as of press time, the act has not been announced.

For the bourbon lovers, a demonstration by Brown-Forman on how to make a new drink called a “New Fashioned” will also be shown on the screens, and these cocktails will be sold around the track and infield.

A big question in a lot of locals’ minds is if Thurby will become another massive celebration, like the Kentucky Oaks. A long time ago, Oaks used to be the day for the locals, but now it’s almost as popular as Derby. Schools and businesses close for the day, and it attracts thousands of people every year, ranging from the drunk college kids running across Port-o-Pots in the infield to celebrities and wealthier citizens in Millionaire’s Row. In 2013, the attendance for Oaks was 113,820, which was the second highest in Oaks history. However, crowds are not expected to be nearly that high on Thurby, as many people still have to work, and the annual Derby Festival Pegasus Parade that takes place that afternoon should cull the herd.

“We want it to be big enough that you feel like you’re someplace special, but we’re only expecting about 40,000 to 50,000 people,” says Rick Sneed, director of lifestyle communications at Churchill Downs.

Along with the musical performances and new bourbon drinks, everyone who comes to the track on Thurby will be eligible to enter to win a box for six at both Oaks and Derby.

If you’re tired of the crowds, why not see what Thurby has to offer? Who knows, maybe if this gets big enough, there will be a “Wurby,” “Turby” and “Murby,” and we’ll all have an excuse to party for the entire week — as if we don’t already.