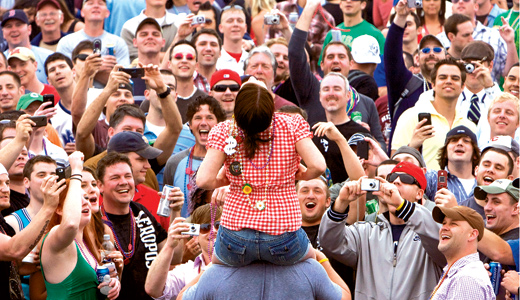 I moved to Louisville in November of 2011. It was damp and cold, and I was from the desert. My only friend was the boyfriend I’d moved here with. I telecommuted for work, which meant there were weeks when my only social interaction outside of my romantic relationship was with the Insight call center guy who scheduled my appointment for service. (I still remember our conversation. It was about naming traditions within families.) All of this could have kicked my anxiety into high gear. I could have lashed out at my new surroundings, but I didn’t.

There was too much to explore around this town that took pride in the adjective weird. I worked at coffee shops — Please & Thank You when I was hungry, Heine Brothers near the Watterson when I really needed to focus, Day’s for every other moment. I went to meet-up groups, like FacetimeLou, New2Lou and Let Them Tweet Cake, where I met people who became my friends. I realized that local restaurants were plentiful here, and I quickly gained 10 pounds. I fell in love with the architecture and character of my affordable urban neighborhood. I looked forward to spring and the promise of even more events to attend and activities to be a part of.

When spring arrived, everything changed.

The laid-back attitude I’d instantly fallen in love with seemed gone, replaced by a preoccupation with the Kentucky Derby and its three-week “festival” of related events. When I admitted I didn’t understand all this hullabaloo over a sport nobody cared about the other 364 days of the year, I was told it wasn’t about the race itself but the “vibe” and “atmosphere.” I was told it was a reason for the city to celebrate and play dress-up. I was told it was about tradition and pomp — or about the infield opposite of depravity and shamelessness. One person even asked me if it was exciting to be here after two-plus decades of just hearing about Derby?

Pardon me while I roll my eyes.

Having an Us Weekly photo spread full of D-list reality television celebrities standing outside a barn does not make your event an international affair. “Derby famous” is the equivalent of “midweek club host at a shitty nightclub famous” in Las Vegas, which is the equivalent of “Hello, welcome to Applebee’s! Are you ready to order?” in Los Angeles. The first weekend in May isn’t New Year’s Eve in New York City. The whole world isn’t watching and wishing they were here.

Oh, and you don’t need a reason to drink yourself silly, or dress up fancy, or bake weird pies with chocolates and walnuts, or wear hats. Each of these things is perfectly acceptable at many of the wonderful events Louisville hosts year ’round — Lebowski Fest, Forecastle Festival, Humana Festival, Waterfront Wednesdays, that place in Southern Indiana where school buses race each other, etc. The city has so much going for it all year, yet every spring it seems to devolve into being excited about an archaic sport that all the tourists are ruining for you anyway. First, Oaks was locals’ day. Now, everyone is trying to make Thurby happen because Oaks is just as crowded. Here’s a suggestion: Let the tourists have it. Las Vegans don’t hang out at the Strip. New Yorkers don’t meet up for drinks in Times Square.

Inevitably, people will tell me I’m still missing the point. I’ve been told that I’ll never understand because I’m not from here and nobody knows a damn thing about what high school I went to. Maybe that’s true. But I have to wonder, isn’t the future of this city tied to newcomers with new ideas and approaches and energy? Maybe it’s time to hang up that Derby hat.