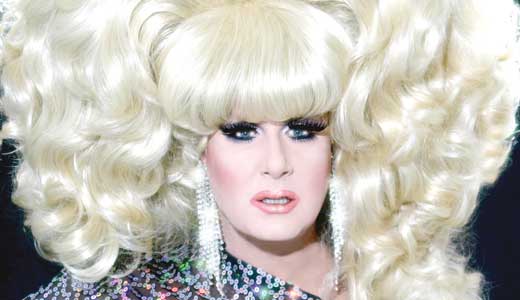 The Lady Bunny grew up in Chattanooga, Tenn., in the ’60s and ’70s with very supportive parents. The Lady, raised as Jon Ingle, was always open about his sexuality and wore long hair. When a teacher threatened to cut it, his dad marched down to the school threatening legal action “if she touched a hair on my head.”

“It was interesting growing up as the child of the town’s lefty liberal,” Bunny says. “I didn’t always understand it and hated missing ‘The Brady Bunch’ so my dad could watch Watergate footage, but looking back, I think he taught me the right values.”

Upon graduation, Ingle moved to Atlanta — and it was burning. “It was the first big city I lived in,” he says, “and as youth will do, I went wild with booze, drugs, nightclubs, sex and colorful friends like RuPaul.” He went there to attend Georgia State, but got an education in nightclubs instead.

Moving to New York in 1984, Bunny organized the annual Wigstock festival, which helped launch her profile nationally. Today she tours, DJs, acts, writes and continues to use her personality to pay the bills. Off the road, she hosts a regular show with Bianca Del Rio, currently seen on “RuPaul’s Drag Race.” About her friend Bianca, Bunny says, “She’s obviously hilarious but also a sweet person and very talented … But if she wins, they might have to change the show’s name to ‘RuPaul’s Dog Race.’ She’ll kill me for that one!”

LEO: Why didn’t you become a judge on the original “RuPaul’s Drag Race”?
The Lady Bunny: I was never asked. There’s a bizarre Internet rumor that I turned down the offer, which isn’t true. I was asked to do (spin-off) “Drag U” and was a judge on (it) for all three years. So I certainly wouldn’t turn down a role on Ru’s more popular show!

LEO: What’s most important for a queen — the look or the personality?
TLB: I think all kinds of queens should be able to shine — there isn’t one path to success. Is Dame Edna pretty? No, but she’s incredibly funny and a huge star. A lot of “Drag Race” fans are constantly weighing in on whether the show should be based on comedy queens or prettier, more polished, pageant-looking queens. Well, get your own show and you can feature what you want on that one — don’t tell RuPaul and (producers) World of Wonder how to run their hit show because of your pre-conceived notions of what drag should be. RuPaul feels it’s his job to showcase every type of queen, from club kid to beauty. He’s from a club kid background, and I know he’s fought the network to include nuttier queens like Tammie Brown.

LEO: Can I start a new Wigstock here?
TLB: Well, there is a licensing fee involved, since it’s trademarked. So if you’d like to pay that, by all means, let’s do it. We’ve had Wigstock events in New York, San Francisco and Chicago. But we worked very hard to create that name and have to protect it. That said, there is something magical about a wig festival. In New York, we’d see dogs in wigs, body builders, straights and known queens prancing around. Wigs transform you and push your adrenaline button — and really can bring a community together!