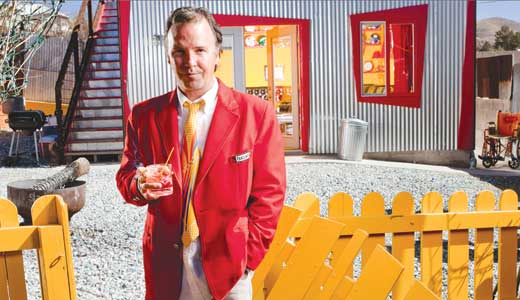 Doug Stanhope is the King of Crass (a lesson learned from his mother). He is not the kind of comedian who feeds an audience punch lines with a spoonful of sugar; he makes you swallow it with a shot of tequila. He’s most certainly not for the faint-hearted or easily offended, but he is one of the most well-respected comedians working today (his last special was recorded in Norway). Stanhope returns this week, and he took a few minutes to chat with LEO.

LEO: What do you remember about Louisville?
Doug Stanhope: I remember being in Louisville one time when my girlfriend, who was not on the road with us, got put into a mental institution. She called and said, “They’re taking me away right now, and they won’t even let me stop at the house to get clothes. You’re gonna have to mail me some clothes.” So we were in Louisville; we went to a thrift store, and realizing that she had to wear whatever we sent, we proceeded to buy the most ridiculous, sequined gown, fat-lady muumuus and oversized novelty slippers.

LEO: Sympathy is not your forte.
DS: Yeah, she had to walk around the loony bin like that for a week and a half until we could get back and spring her — with her giant prom dress on and oversized Charlie Brown slippers, going, “I’m not crazy … you’re crazy. I’m not crazy.”

LEO: What was young Doug Stanhope like?
DS: I was like the weird class clown — I was a horrible vandal and pyromaniac. Yeah, like we dug up our cat a couple of years after we buried it, bleached his bones and tried to put it back together. That kind of kid. All the profiles of a serial killer.

LEO: So your career options were limited to serial killer or comedian?
DS: I sometimes wonder, if I didn’t have this outlet, how many people would die?

LEO: Was your family funny?
DS: My mom was like “Beavis and Butthead” funny, because when we were 15, she would let us smoke cigarettes and read Hustler magazine. She swore like a truck driver … she was a truck driver for a while. So yeah, she was crass funny, and my dad just didn’t get it. They weren’t together very long. My dad was sweet — like a dumber version of the dad from “Happy Days.”

LEO: Your fans are very loyal, but you still seem to have a combative relationship with the audience. Is that just part of the act?
DS: I think you get back what you put out. There’s a lot of “fuck you” to my act … meant with love. So you get a lot of that back … with love. Mostly … hopefully, with love.

LEO: So do you miss the days of (being) a struggling comic?
DS: I definitely had the best days of my career then. The first few years were fantastic, because you finally realize you can get paid for this. You were completely free in a sense, living in a car, waiting for another gig to pop up — in the meantime, you’re just staying on some fat girl’s couch. And every laugh, you can’t believe you’re getting it.