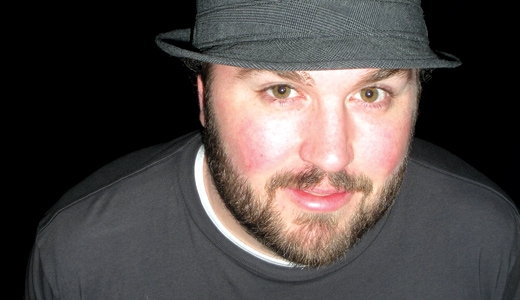 Is it late at night? Are your hands stained a Cheeto orange? Are you dreading the drug test for work you’re going to have to take tomorrow? Geoff Tate is your kind of guy. The Cincinnati native, who now lives in Los Angeles, has a very Midwest perspective with a touch of West Coast flavor mixed in. He’s appeared on “Craig Ferguson,” “Live at Gotham” and Bob & Tom’s morning show. He stops in at The Bard’s Town Saturday night.

LEO: Who are your inspirations?
Geoff Tate: Bill Cosby. I saw his special (“Bill Cosby: Himself”) when I was 6. And then I became a fan of the weird stuff in the early ’90s that I used to see on Comedy Central, like Dana Gould and Marc Maron.

LEO: I hear comedians refer to “Quitting Day,” where they cut ties with any day jobs and just go on the road fulltime. Did you have anything like that?
GT: I remember when that happened, but it wasn’t that conscious for me. It was sometime in 2006. I was working in St. Louis — they had two clubs then, and I was working one of them. Someone canceled the next week at the other club, so they asked me if I wanted to do that, and I called my day job to see if I could get the next week off … and they fired me. So I had to choose right then. After that, I had to frantically start booking enough shows so I wouldn’t have to go back to a job.

LEO: Comedy is a self-loathing art form. Does that come from a bad childhood?
GT: No more or less than anybody else. We moved a lot, so I never had a lot of friends for a very long period of time. I would have some, then we’d move and I’d have to start over. I don’t want to say it was unhappy, because you hear stories of people that didn’t have food all of the time, or they wear shoes that don’t fit. It wasn’t anything like that.

LEO: It sounds more lonely than sad.
GT: Yeah, and it did instill something inside of me that forces me to move around a lot now.

LEO: Do you think it’s true that comedians are unhappy people?
GT: It depends, but generally, yeah, I think they are. But I think they would be significantly more unhappy if they weren’t comedians. It’s the kind of job where even if your dreams come true, it still kind of sucks. It’s like being in a band — once you reach a certain level of success, you will find yourself sleeping in a car a lot more often than if you had failed.

LEO: Better groupies: rock stars or comics?
GT: Rock stars. I don’t know much about ’em, but they have to be better than comic groupies.