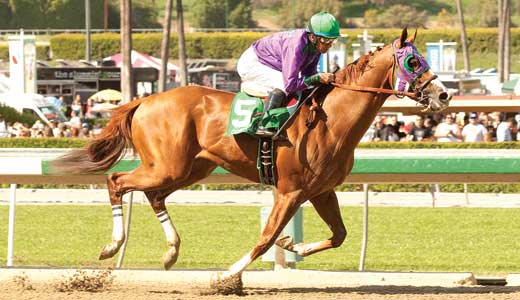 Until last Saturday, the Trail to the Kentucky Derby pretty much resembled the Road to the Final Four: a pile of losing tote tickets littered amongst busted basketball brackets.

Until last Saturday, 26 different horses had won 29 Kentucky Derby prep races. No horse in any part of the country had been able to establish any kind of consistent mastery over the others.

That is, until last Saturday, when California Chrome delivered an eye-popping triumph in the Santa Anita Derby, winning his second straight important prep — again by an easy margin, again in fast time — to step to the head of the class as the definite horse to beat in the 140th Kentucky Derby. The handsome chestnut will likely arrive at Churchill Downs as the strongest Derby favorite since Big Brown went off at 2-1 in 2008 and won for fun.

And he won’t be just a figure-sheet favorite, either. People are catching on to this horse. California Chrome was the 4-5 favorite at Santa Anita, and most of the crowd of 35,241 roared their approval as he drew away from his foes like a superior animal. Even with jockey Victor Espinoza easing off the throttle nearing the wire, Chromy covered the final eighth of a mile in a sharp 12 2/5 seconds, getting the 1 1/8 miles in 1:47 2/5. A fast time on a fast track.

California Chrome is easy to spot: reddish-gold chestnut color, big white blaze on his face. The jockey in green-and-violet-colored silks. And he’s got these four white feet that when he gallops, they crisscross like white scissors. It’s neat.

Fans in California have also caught on to the likeable old bird who trains the horse, Art Sherman Jr. — an unpretentious guy, with the second big horse of his life. Fifty-nine years ago, Sherman came to Louisville as the 17-year-old exercise rider of Swaps, who beat Nashua in the famous East-West rivalry Derby of 1955. You know everybody loves those kinds of stories for the Derby, and Sherman, who trains his California-bred colt at the Los Alamitos quarter horse track — instead of at tony Santa Anita — is just the guy to recall it all. Derby fans will love him. If California Chrome can win it, Sherman, 77, will supplant Charlie Whittingham (at 76) as the oldest trainer to win the Kentucky Derby.

Before the Santa Anita Derby, HRTV reporter Michelle Wu asked Sherman if he saw any ready comparison between California Chrome and Swaps.

“Well,” said Sherman, thinking it over, “I guess they’re about the same color. But Swaps set six world records, you know. If he’s half as good as that, I’ll feel pretty good about him.”

Of course, California Chrome doesn’t have to win the Kentucky Derby. There’ve been plenty of “wonder horses” that’ve been handed back their press notices at Churchill Downs.

Plus, other contenders have run well in other big Derby preps. Two 100-pointers are left to be run this Saturday: the Blue Grass Stakes at Keeneland and the Arkansas Derby at Oaklawn Park in Hot Springs, Ark.

Florida Derby winner Constitution was making just his third career start in the Florida Derby, but followed jockey Javier Castellano’s commands perfectly to sneak through on the rail to beat the more-seasoned Wildcat Red and General A Rod. Castellano, the 2014 Eclipse Award winner, is riding at the top of his game and horses are running for him.

Wicked Strong was dull this winter in Florida but came running like a good horse to win the Wood Memorial in New York.

“When I saw him laying five lengths off the lead, just galloping, I really felt we had a big shot,” said Wicked Strong’s trainer Jimmy Jerkens. “He was really comfortable laying relatively close behind a pretty fast pace.”

That’s often a winning trip in the Kentucky Derby.

Constitution and Wicked Strong loom as second and third betting choices on May 3. But after the top three, the odds jump. Louisiana Derby winner Vicar’s In Trouble is going good for rider Rosie Napravnik. But we think second-finisher Intense Holiday got kind of a “training trip” in that New Orleans race, and might be better on Derby Day.

A horse well off the radar might be Ring Weekend, which looked pretty sharp winning the Tampa Bay Derby. We Miss Artie ran professionally in just getting up at the wire in the Spiral Stakes at Turfway Park. And Hoppertunity, though a distant second to California Chrome in California, won the Rebel in Arkansas and is a handy horse that could hop into a trifecta.

But it is still three weeks until the Derby — and many a Run for the Roses has been won by a late-blooming colt, getting right at the right time. We’ll see what happens in the Arkansas Derby and Blue Grass, and then take careful stock of how they all train over the track at Churchill Downs.