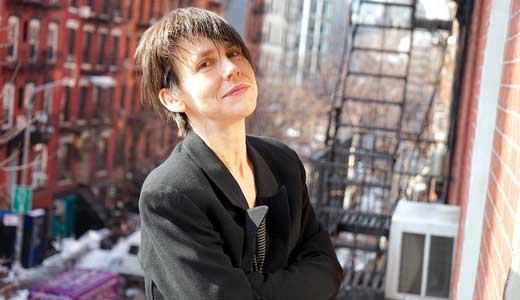 “In 1992, when the Lesbian Avengers started, I was living in a loft on Avenue B with my ex-girlfriend Amy, and her roommate, Rennes, who would pick up closeted fags and have noisy, slurpy sex.” That’s how activist, blogger, journalist and former Louisvillian Kelly Cogswell begins her memoir, “Eating Fire: My Life as a Lesbian Avenger.” Cogswell documented the early days of the Lesbian Avengers, a direct action group formed to champion lesbian issues and visibility. She stops by Carmichael’s on Saturday.

LEO: Why write “Eating Fire” as a memoir?
Kelly Cogswell: “Eating Fire” is definitely a memoir, even if there aren’t any detox stories or gruesome child abuse. It’s more the coming-of-age variety, the transformation from ex-Southern Baptist poet into lesbian activist, journalist and all around trouble-maker. Initially, I just wanted to tell the story of the Lesbian Avengers, a direct action group I was part of in the ’90s. I was pissed that even though we spread all over the world and got featured in Newsweek, the Avengers had been all but forgotten. Nearly two-thirds of the book is about the rise and fall of the Avengers, and the rest about the adventure of starting an online magazine in pre-Twitter days and dealing with life as an immigrant during the years I lived in France.

LEO: Have you always had activism in your blood?
KC: I think I always had a very strong sense of right and wrong, but mostly I prefer to avoid conflict. Things have to be pretty serious for me to swing into action. Like, I never send food back in restaurants, no matter how crappy it is. And I only went to the first Avengers meeting to hang out with friends and meet girls!

LEO: What made you leave Louisville for NYC?
KC: I’d like to say I had a master plan, but I was really just drifting a little after college. I went to Cincinnati first, where I was writing poems and doing performance art. Then I got a place in a grad school in New York, which pretty much ended in disaster. I stayed because I felt really comfortable there, and god knows it was easier to be in New York, rather than Kentucky, after I came out. My mother back in Louisville was not at all thrilled — still isn’t.

LEO: How did you make the leap from activist to journalist?
KC: I’d been writing since I was a kid, mostly poetry, but during the Avengers, I started to do some media work writing newsletters and press releases. After the Avengers combusted, I still felt the need for activism, and my girlfriend and I started The Gully online magazine, one of the earliest Internet publications for LGBT people and the only one so far to offer “queer views on everything.” She put me through journalism boot camp, where I learned the value of fact-checking, and the rest is history.

LEO: Tell me about the early days of the Lesbian Avengers.
KC: I think some of the more experienced organizers must have known something special was happening, because the most common thing is to start a group, do one or two actions, then collapse. But the Lesbian Avengers kept having actions and drawing more people to meetings. Even newbies like me knew something extraordinary was happening by 1993 when we organized a big Dyke March in Washington, D.C., and nearly 20,000 lesbians turned up. Afterward, Avengers chapters sprang up everywhere. The group really touched a chord. Maybe because we not only tried to change what the world thought about lesbians, but also to change how lesbians thought about themselves, empowering dykes to enter public space and feel confident expressing themselves, whether the sentiment du jour was rage or whimsy.

LEO: What’s the biggest cause we need to fight against today?
KC: We’ve definitely picked up speed addressing legal inequalities. I think we’ll definitely see same-sex marriage nationwide in my lifetime — as long as I’m not hit by a truck tomorrow. But there are some problems legislation can’t solve. Hate-crime laws only kick in after the fact. We need to figure out ways to prevent violence. And also deal with homophobia inside the family. A huge amount of LGBT kids still end up homeless because their parents would rather see them begging on a street corner than find a way to love a child that’s a little different from what they expected.

LEO: What are you looking forward to coming back to in Louisville?
KC: I was lucky enough to reconnect with people I went to school with practically from second grade through high school. So I’m looking forward to seeing them, even if it’s almost an alternative reality. I start wondering what it would have been like if I’d stayed. I also like exploring the city itself as an adult, since my experience as a child was home, school, church. Above all, I am humble and grateful the city is celebrating my return with an enormous display of fireworks. Thank you. Really. It’s too much.