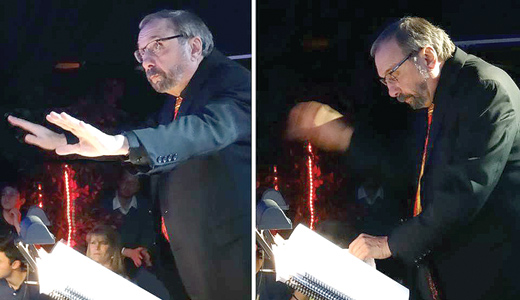 Composer, arranger, educator, radio host, Grammy nominee: John La Barbera is all of these. After teaching at the University of Louisville for 23 years, La Barbera retires at the end of the semester. For him, though, “retirement” means preparing another album, teaching private students and traveling with wife Marie and his Big Band (including a return to Japan this fall). U of L celebrates his career with a concert Saturday night.

Caravan, his third and latest album, includes three originals and six new arrangements of compositions by Duke Ellington (the title track) and others. “An album of all original material is not what the pubic wants. I think it’s too self-serving, maybe because I come from the old days and learned from Buddy (Rich) and (Count) Basie and Woody (Herman) and all those bands,” he says. “You’ve got to give the public one or two songs they can grab onto. Once you do that and gain their confidence, then you can play them some of your original material.”

The song “Caravan” was not intended for the album, but 2013 performances in Japan were highlights of that successful tour.

Regarding teaching, La Barbera says, “I’ve always been an educator … It seems to run in the family. My father taught all of us, taught everybody in town, and his father taught back in the Old Country. When you teach something, it … challenges you to be able to articulate what you know.”

Mike Tracy, director of U of L’s Jazz Studies Program, recruited him following a chance meeting with John’s brother Pat. “The students really appreciate (La Barbera’s Business of Music) class. A lot of other music schools don’t have that; we were doing it early on, because John did it.”

Alumnus Chris Clark, now an instructor as well, says, “Studying composition and arranging with (him) was consistently both informative and inspirational. He didn’t simply help me become a better writer; he helped me become a better musician and person as a whole. He exemplifies, to me, what it is to be a great musician and a great educator.”