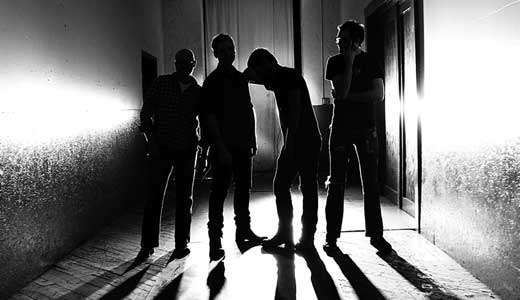 Veterans of the indie/punk scene, Frontier(s) return this spring with a brand new EP, the impending five-song 12-inch White Lights, released by the Charlotte-based Tiny Engines Records. Guitarist Matt Weider explains, “We’re really happy to be working with those guys. The Tiny Engines roster is just killing it right now. We were originally just going to release a 7-inch, but things went really well in the studio and we came out with five songs we were happy with.”

Unlike Elliott or By the Grace of God, predecessors to Frontier(s), there is no specific underlying theme to the EP, at least none made explicit by the album name. “We were looking for a title that could tie into the artwork, and White Pony was taken,” Weider jokes.

Simply put, Frontier(s) just want to make the kind of music they like. “This band, more than any other band I’ve ever been involved with, just kind of is what it is,” he says. “We don’t really belong to any particular scene, so there is no pressure to sound a certain way.”

For Weider, the band’s differences are their strength. “(Vocalist) Chris (Higdon) and I both grew up in the all-ages punk/hardcore scene, but what’s funny is I’m not sure anyone in the band even knows what the other guys listen to. It’s sort of strange, honestly. We don’t really talk to each other all that much about music, so everyone is just kind of doing their thing without the other guys really knowing where it’s coming from. It just sort of works itself out.”

As for their future, Weider says Fronier(s) will tour, but are ultimately just happy to still be making noise together. “The plan is just to be a band and make music. We’re at a point in our lives that just having the opportunity to still do this seems like a blessing. I’m really grateful there are people out there interested in what we do.”

White Lights will be released in May; pre-order at tinyengines.limitedrun.com.