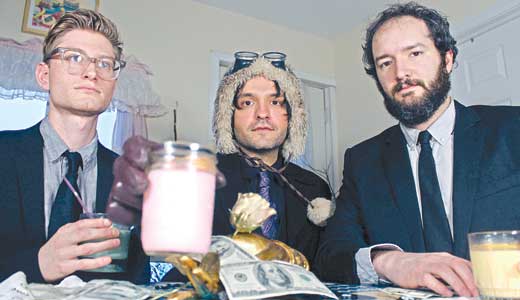 Brooklyn’s Phantom Family Halo includes some notable Louisvillians, and we caught up with one, bandleader Dom, to discuss their new album. Catch them live Friday at the New Vintage.

LEO: The Halo line-up has changed again. Why?

Dominic Cippola: The changes have really only been minor. The line-up of myself, David Lackner, Ben Lord and Christian Lee has been pretty solid for almost two years now. We have some auxiliary folks from time to time if the live set calls for it. We are bringing a couple guests with us especially for Louisville. This often helps us by adding a fresh approach to what we might be trying to do.

LEO: How hard — or easy — is it for you to conjure mystical atmospheric vibes in your music?

LEO: For this album (Raven Town Witch), the band’s made an almost 10-minute video for one song. Do you feel it represents your vision in the same way the music does?

DC: Alice Millar and Gabriel Mueller are the excellent people behind that. Gab is Lackner’s wife, as well. They had used some music of ours in some past projects, so it was a very natural collaboration. I feel that video perfectly accompanies the uncomfortable theme present throughout the song.

LEO: You’ve toured with and/or opened for some older icons. What have you learned from them?

DC: Bodies need rest. We all need our rest. There are also two collaboration records coming out this year: The Funeral Party with Lydia Lunch, and Straight Starlight with Kawabatta Makoto. We are trying to carve out time to record the next record with Martin Bisi in the next few months. I’m also playing drums in a project with Martin Bisi called FANGS that we hope to bring through Louisville at some point this year.

LEO: Seems like New York’s been pretty good for the Phantom Family Halo. But you miss Louisville, yes?