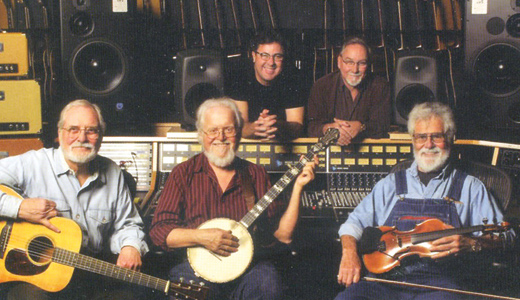 It sounds like a movie, but with a Kentucky twist: Four guys who played together in the 1970s went their separate ways; one became a star. Now, decades later, they got the band back together.

Harry Bickel (banjo, vocals), Harry “Sparky” Sparks (guitar, vocals) and Doc Hamilton (fiddle, mandolin) were the core of the Buzzard Rock String Band in 1975. They were all in their 30s; the Harrys had careers. But Bickel had bought a 12-room Victorian in Cherokee Triangle, and it also became home to an instrument repair shop, a practice space, Hamilton and the 18-year-old guitarist from Oklahoma who had just joined the band the Bluegrass Alliance — Vince Gill.

The 1960s and ’70s were a vibrant time for old-time, bluegrass and newgrass music in Louisville, and Bickel’s house, “The Bluegrass Hotel,” became its center. Soon, though, Gill left for California. By 1980, Sparks and Hamilton had also moved away. New members joined Bickel; an album, I’ve Got the Blues for My Kentucky Home, was released in 1988 by June Appal Records. The Buzzards were soon comatose.

The four friends stayed friends. In 2012, 55-year-old Gill and his now-retired former bandmates met up at Gill’s home studio in Nashville. For two days, the men, augmented by bassist Charlie Cushman and accompanied by Gill’s dog Chester, laid down the tracks that would make up Nobody Special, their new album.

In the album’s liner notes, Bickel writes, “It is really good that the four of us did this now. Sparky and Doc are both in their seventies. Of the original band, I’m the youngster in my late sixties. Vince, of course, is still just a kid to us. One day, one of us will be gone and the four of us will never have this opportunity again. We’re just glad that we had the opportunity at all.”

Several current and former members play Sunday, April 27, at 5 p.m. in the U of L Red Barn. Will Gill be one of the performers?