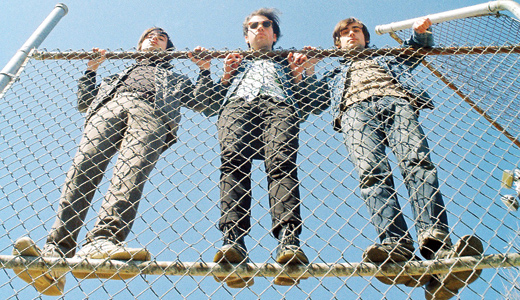 Reap what you sow

When LEO first met White Reaper in 2012, they were a modest-yet-promising two-piece punk band eagerly anticipating their debut performance; a year and a half later, they’re a ferocious power trio who just landed their first record deal, and they’ve got their sights set on the national stage.

Originally composed of drummer Nick Wilkerson and singer/guitarist Anthony Esposito, the band wisely picked up Nick’s twin brother Sam to cover the bass guitar shortly after they self-released their seven-inch single “Conspirator” (backed with “The Cut”) in the summer of 2013. That summer and fall saw the boys mounting multiple tours of the Midwest while regularly performing to an ever-expanding crowd of devoted followers in town.

“We’ve played some pretty cool shows on tour, but to be honest, the coolest shows we’ve played have been in town,” says Esposito, citing recent gigs at Haymarket Whiskey Bar and Fresh Start Growers’ Supply as especially memorable. He admits the band was left “awestruck” by their first trip to New York City earlier this month.

They will have plenty more opportunities to surpass those successes this summer, when they’ll open for fellow Louisvillians Young Widows across a 15-gig tour of the West Coast. That tour just happens to coincide with the June 24 release of the Reap’s self-titled EP for Polyvinyl Records. The EP’s six tracks were culled from recording sessions with Trip Barringer of Treehouse Audio and Jim Marlowe of Astro Black Records, and is grabbing the attention of listeners thanks to the premiere of lead single “Half Bad” on Pitchfork.

When I ask the guys how they landed the record deal, they cheekily explain to me that their friend Tobey Maguire (of “Spiderman”) made the critical introductions. While I have a hard time believing that these underage hooligans know many Hollywood types just yet, the truth is that White Reaper’s killer tunes speak for themselves; it was never a matter of whether the right people would take notice, only when.