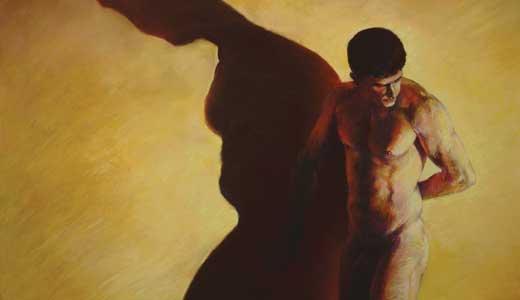 You pretty much know what to expect with a show titled “The Figure Revealed,” Kaviar Gallery’s third biennial nude exhibition featuring 34 regional artists. But that doesn’t mean there are no surprises. Aside from the standard Western art historical practice of featuring white women in paintings, drawings and photography, the gallery is also showing other media, people of color and men.

Many local favorites are among the artists in the show, such as painters Debra Lott, Claudia Hammer and Sharon Matisoff. They certainly deliver. Lott has mastered the large-format figurative, as her “Oil Study 1” and “Oil Study 2” attest. Hammer rarely hits a false note, and her streak continues with “The Orange Bandana.” Matisoff is well known for her people studies, with “Morgan Nude” and “Anna Sleeping” reminding us why.

Ceramics do not often feature nudity. The slab-built piece by David Waltz, “Wall Platter,” follows the dictates of the exhibition’s theme but is fashioned out of clay. Stone, on the other hand, does have its historical fair share of nudes, with a majority being realistic. Karen Terhune’s abstract “Sassy #2,” carved out of alabaster, twists and turns until it’s a bit hard to figure out which end (or breast) is up.

The most unexpected media in the show is collage, used in two works by Tom Boykin. It’s quickly apparent that he’s worked hard to align color and image to create the overall scenes in “Red Marvel” and “Color Dreams.”

While images of white women abound in the show, there are also a handful of people of color. Because Robert Purol’s oil on canvas “Liz” is a standout for many reasons, especially in technique, his image of a black woman is a welcome sight. Deborah Stanley’s “Somber Reflection” is unusual less for the color of the skin than because it is constructed out of polymer clay.

Ken Landon Buck has answered the request for works featuring nude men in a powerful way. His pastel and acrylic works “Shower #1” and “Mystique” will amaze — they are astounding in size, detail and composition.

The combination of photography and nudity is almost a cliché, so it’s wonderful to see variations on the theme. Joe Mays, who recently had an exhibition at Regalo, is one to watch. “Door #7” and “Door #8” continue his preference of not using professional models and having them participate in the creation of the scene.

Since one can get bare-body overload, it’s a welcome change to get a little humor in the mix. Sarah Vaughn Murphree’s acrylic on canvas “Nude Preparing Income Taxes” produces chuckles, making one wonder if she has lost the shirt (skirt, bra, panties) off her back. “Even Tulips Have a Gender” by photographer Keith Auerbach lets us in on the secret that even flowers pay attention when bare breasts are around.