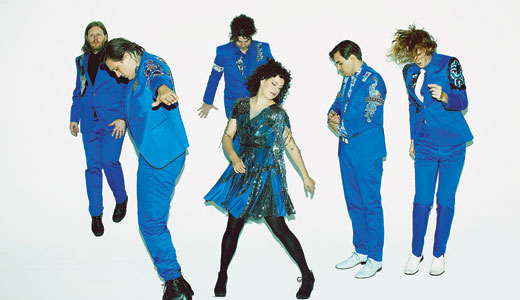 Being a member of Arcade Fire has its perks. When LEO spoke with multi-instrumentalists Will Butler and Richard Reed Parry recently, it was in a week that also included their performance on the new “Tonight Show” and another trip to play at Carnival in Jacmel, Haiti. Oh, and they had just been nominated for an Oscar for scoring the movie “Her.”

It’s all leading up to their latest tour, kicking off Thursday in Louisville, in support of their latest No. 1 album, Reflektor. “Yeah, it’s feeling pretty good,” Butler says. “It’s the start of the tour, so we’re feeling really excited to play the music live, and we’re still really excited to be meeting people and doing stuff.”

It’s been a “very natural” progression for the decade-old band, he says. “You notice it at the start of each record campaign a little more. With time off, you’re just in your artistic zone and you’re making the art. Then you come out of that and people are buying your record and talking about your record, and you’re going places. For that first couple months, it fries your brain. Then, it makes sense again, and you get back in the rhythm of it.”

The Canadian band famously confused mainstream listeners by winning the Best Album Grammy in 2011, turning “Who Is Arcade Fire?” into a funny meme. Now they’re playing places where pop singers like Justin Bieber and Taylor Swift rule, like the KFC Yum! Center. “That is our favorite joke, in terms of the title (of the venue),” Parry laughs.

“Part of it is just playing in places where everyone can buy tickets,” says Butler. “For a number of years, we played smaller than we could have. Tickets sold out so fast — which is great, it ended up being really excited fans, but you wanted to give a chance to everyone to buy a ticket. So we’ve been experimenting with larger venues, just because — in a way — it’s a little more democratic.”

Parry has had a long relationship with Louisville. “I love that place. It’s super interesting and it’s a really soulful town. I’ve had a couple of really good friends in that place.” One of his friends was Jason Noble, the late musician whose work with Rachel’s was a major influence — Parry’s first album of chamber music, due out in June, is dedicated to Noble. “It was a sad loss. He was really good to me, that guy.”

The band arrived earlier this week to rehearse. Two new horn players have been added for this tour, and Parry notes, “We’re just trying to weave together the new show … incorporating new visuals and new ideas that we’re trying to figure out. We’re doing our best to make it look special, hoping you guys engage in it and not just have a boring night in the arena.”

To be an Arcade Fire member is to be closely involved with every detail of the experience, from the sounds to the visuals. This collaboration extended to the “Her” score; the band worked with director Spike Jonze from early drafts of the script to the editing room. “It blew his mind, how intense and collaborative the whole process was,” says Butler.

The sextet was also making Reflektor, their fourth full-length album, at the same time. “We’re all getting better at (collaborating), but it’s hard. Sometimes, it’s really hard to figure out when you’re being useful or when you’re just shutting someone down creatively.”

“I enjoyed working on the film,” Butler adds. “It definitely used a different set of skills from this band, which to me was refreshing and exhausting.”

The band upset some fans last fall when they asked concertgoers to consider dressing in formal attire or in a costume for their show. They have since clarified that it is not a formal request, just a suggestion. Butler feels optimistic about how the Louisville crowd will take the suggestion. “Kentuckians are a good-looking bunch. Definitely not their race-day outfits, right? I think it’ll be pretty good, I think we’ll have a pretty good showing.”

“We’re definitely people that have all seen really amazing shows in our lifetime and have been impacted by them,” Parry says. “We are just trying to do something interesting and hopefully beautiful and striking and memorable.”