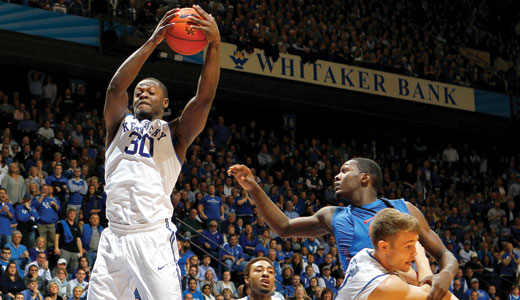 The University of Kentucky Wildcats Men’s Basketball team fell out of the top 25 in the AP Poll on the final vote of the regular season. It’s cruel irony for the team that began the season as the No. 1 team in the country. The No. 1 ranking was based on an incoming freshmen class many labeled “the best recruiting class ever.” John Calipari called his freshmen “alpha-males,” and “40-0” T-shirts were printed.

Nine losses later, the young Cats find themselves in an unexpected position — they’re the underdogs. Aaron Harrison, Andrew Harrison, James Young, Dakari Johnson and Julius Randle have never been underdogs. They were superstars in high school. Recruiting services universally praised them. Pro scouts salivated over their abilities. At the age of 18, they were led to believe they’d already arrived.

How do these unlikely underdogs make things peachy again in Lexington? By rediscovering their inner alpha-male. Until now, no one has ever doubted these young men. Or John Calipari, for that matter. The young Cats and their coach need to play with a collective chip on their shoulder. Calipari said his team is going to increase their physical play in the NCAA tournament. If the Cats flex their muscles and rediscover their confidence in a hurry, all past woes will be forgiven. After all, they have the same potential they did six months ago. It’s not too late for a blue “6-0” T-shirt.