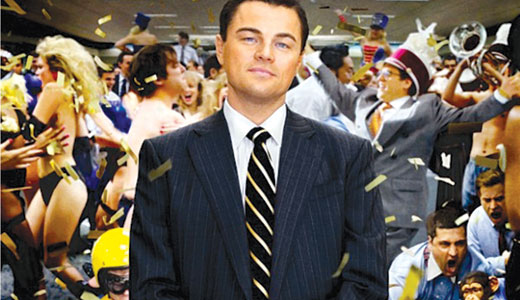 Anton Yelchin is a nobody — a nobody with a psychic secret: He sees dead people, and they are everywhere in this Dean Koontz tale. But everything is just OK in his off-kilter world until a stranger arrives in town with a buttload of invisible boogeymen in tow, and Yelchin understands that all hell is about to break loose. What can he do? First he grabs Sheriff Willem Defoe, then lovely Esquire gal “Stormy” Addison Timlin from “Californication” (should have been his first move), and together the three of them try to stop the Apocalypse in funny and exciting ways. This thing is a gem; highly recommended.

THE WOLF OF WALL STREET

Martin Scorsese teams once again with Leonardo DiCaprio and the city of New York for this look at real-life ’80s corporate mega-sleazeball Jordan Belfort. Supposedly a cautionary rags-to-riches/innocent-to-corrupt tale of power, money and sex, we found it revealed as much about Scorsese as it did the rise of the mega-rich, using the “f-bomb” every other syllable as a means to anesthetize the audience into acceptance of whatever message the director wants to implant. Frankly, we didn’t like this movie, but we were profoundly impressed by it and the way it haunted our every waking moment for days afterward. Powerful, if unpleasant.

This wonderfully unapologetic stinker is the first film from Chiller TV’s new Chiller Films division. Cute little Bonnie Dennison of “Stake Land” and five — count ’em, FIVE — other teens pile into a creaky little rowboat and paddle far out into a lake where a monstrous toothy fish awaits. As directed by crazed filmmaker Larry “I Sell the Dead” Fassbender, the oarless boat starts leaking, and the resulting turmoil is priceless low-rent bloody-teen squealing and hysteria at its best. It’s no “Jaws,” but it has its moments.

Surely by now no one needs a review of David Duchovny’s smash cable porn-drama-comedy, other than to say “it just keeps getting better!” He plays a writer, of course, who is constantly dealing with the combined drama of his career; his daughter, Becca (Madeleine Martin); and the seemingly endless parade of gorgeous women passing through his bed. But the real secret to the show’s success is the brilliant writing, which in Season 6 is fixated on rock ’n’ roll and Becca’s new career as a college dropout/would-be writer.

This Disney-fied remake of a wonderful French film by the same director has a few sanitized laughs, but for our money, ask for 2011’s “Starbuck.” In either case, the plot involves a worthless, chronic-masturbating man-child who puts his talents to use at a fertility clinic and winds up with hundreds of children. This American version stars Vince Vaughn, who brings his usual likeable-but-dim talents to the fore, with help from Chris Pratt and Cobie Smulders. Like we said: fun, but the original is much better.

A made-for-German-TV thriller unlike anything ever seen on U.S. TV. It’s the story of an archeologist (Iris Berben) who finds her adult son dead — and her scientific mind knows immediately it was murder, even if the cops don’t. She quickly reconciles with her ex-husband, and together they go globe-hopping for justice, leading to a deadly confrontation in a filthy African clinic. Breathtaking in scope, with an amazing cast that includes the always-welcome Mikael Nyqvist (“Dragon Tattoo”), this is a rich and daring subtitled drama that doesn’t insult your intelligence. Highly recommended.

Frankly, we didn’t have high expectations when we first heard of this coming to Comedy Central, but then we were blown away by their irreverent, rapid-fire stream-of-consciousness antics and fearless poking at institutionalized racism. Their bit on asshole superheroes, alone, could power any ordinary comedy for a full season — and nearly had us peeing the couch. Addictive and entertaining as hell. You’ve been warned.

You get two flicks from the Comedy Central years and two from The SciFi Channel in this Joel Hodgsdon/Mike Nelson set. But the best reason to own it is 1957’s “Untamed Youth,” featuring Mamie “Yowza” Van Doren and Lori “Creature from the Black Lagoon” Nelson, who get serenaded by underrated rocker Eddie “Summertime Blues” Cochran! If that wasn’t enough, it also contains the supremely bad “Pumaman,” one of the absolute worst — and unintentionally hilarious — Italian superhero cheapies ever made. A must own!

A wonderfully smart, gentle and heartwarming romcom for adults. Martin Clunes (“Doc Martin,” “Reggie Perrin”) is an undertaker named William. He meets and falls for Mary, a feisty midwife played by Julie Graham (“Survivors,” “The Sarah Jane Adventures”). Together they explore love and family and social expectations while bringing people into this world … and back out again … in knowing style. Some of the best writing ever penned for the small screen and a raft of fun guest stars combine to make this a nice change of pace from frantic American TV.

ALIEN BOY: THE LIFE AND DEATH OF JAMES CHASSE

In 2006, the police of Portland, Ore., brutally beat 42-year-old James Chasse to death for the crime of being an unarmed schizophrenic. And if you think we’re being flippant: a DOJ investigation found that Portland “engages in a pattern or practice of excessive force” (against persons with mental illness), and their City Council unanimously agreed. This doc looks at the events leading up to Chasse’s death and the decades-old patterns of prejudice, violence and disrespect against mentally ill persons there. Can you say it’s any different in your hometown?

This is exactly why we love indie films: a teenage girl, living in a blasted, otherworldly Texan landscape that had once been a drive-in movie complex, desperately tries to grasp her true place in the universe — a universe that seems to be speaking to her in subtle ways. With AJ Michalka (“Super 8”) as the girl and (believe it or not) Alicia Silverstone as her white-trash mom.

This first-ever animated collaboration between Black Widow and Punisher contains all the Avengers action you’ve come to expect from Marvel as the two, aided by Nick Fury, go after some lethal SHIELD tech stolen by the global terrorist organization, Leviathan. The Blu-ray version contains a pair of excellent behind-the-scenes featurettes, including a look at the development of the animated characters, and a bit of back story on each. Excelsior!

This remarkable subtitled German TV mini-series (originally “Verbrechen nach Ferdinand von Schirach”) is a damning look into the soul of the global legal profession. Josef Bierbichler plays the just-past-middle-aged defense lawyer at the top of his game. His stooped shoulders carry the weight of every foul deal he’s made to get his clients off — even when he knew they were guilty of horrendous crimes. But inside he’s still human — and a surprisingly nice guy — who has come to understand that the capacity for inhuman acts lies in each of us, needing only the necessity (or an excuse) to blaze into terrible life. American TV has nothing like this. Highly recommended.

IN THE NAME OF THE KING 3: THE LAST MISSION

The third in a series based on the “Dungeon Siege” vidgame, starring Dominic Purcell as a modern-day mob baddie who kidnaps some kids and winds up back in the Middle Ages fighting a dragon. And, no, we’re not making this up. From director Uwe Boll, not surprisingly, with Shelly “Stripper Acadeny” Varod and Bulgarian model Ralitsa Paskaleva. What can we say, we love crap like this!

MAPP AND LUCIA: THE COMPLETE COLLECTION

This may be the single most British thing we have ever reviewed. Limey TV vet Prunella Scales is Ms. Elizabeth Mapp, a purring and proper social shark who runs the little 1920s village of Tilling as her own personal kingdom. All is safely in control — with her at the wheel — until Ms. Lucas (Geraldine McEwan, of “Agatha Christie’s Marple”) moves in and upsets her social apple cart. Nigel Hawthorne (“Amistad”) is Georgie, who suffers through the privilege of knowing Lucia with classic British restraint. A proper comedy of manners and grace, to be sure. Sadly, only 10 episodes were ever created, but each is gem.

The end of the Freddy Krueger decade was marked by a number of experimental, syndicated anthology horrors on TV, and this was by far the best, lasting three seasons, a remarkable 72 episodes. Each one was guaranteed to have (1) a terrific monster, usually the brainchild of horror makeup master Dick Smith, (2) a great guest star or three, many from “SNL,” “Taxi” or “The Cosby Show,” and (3) a gruesome/ironic/comic ending … usually with a nasty CRUNCH as the camera panned away. Now fully remastered and nicely boxed on nine discs. Best of all, you can win one FREE at videotapeworm.com/video.php courtesy of EntertainmentOne, LEO and The Video TapeWorm. Enjoy.

This international award-winning drama follows an Iranian man, married to a French woman with two children, who returns to sign divorce papers years after abandoning them. On arrival he learns that she is in a relationship with an Arab whose wife is in a coma. And there is a strong suspicion that the French wife put her there. At its heart, this is a drama about morality: how it is defined, who has defined it, and how it serves some and marginalizes others. At least that’s what we got out of it; there are other opinions. Make your own.

THE TRUTH ABOUT EMANUEL

We generally avoid chick-thrillers like the plague: They are usually lame, boring and pointless. But this one delivers in a way that you can’t help but applaud. Lovely Kaya “Skins” Scodelario plays Emanuel, a troubled young woman who quietly struggles with reality. She becomes fascinated with neighbor Jessica Biel (who wouldn’t?), who bears an uncanny resemblance to her own deceased mother. But it’s not until she babysits Biel’s newborn that the cracks in her psyche open up and threaten to swallow the world. Recommended; with Alfred Molina and Frances O’Connor.

This CGI-animated “true” tale of life among the dinosaurs didn’t exactly burn up the box office, but the problem was one of expectation and a very misleading ad campaign. Yes, it is rated PG and it does (unfortunately) feature “cute” talking dinos voiced by Charlie Rowe, Karl Urban, John Leguizamo, Justin Long, etc., but at its heart, this is a tale of survival wrapped in a state-of-the art reconstruction of everything we’ve learned about the prehistoric Earth in the last 30 years. And yes, it is a bit of a misfire, but what a beautiful misfire. Turn the sound off and enjoy.