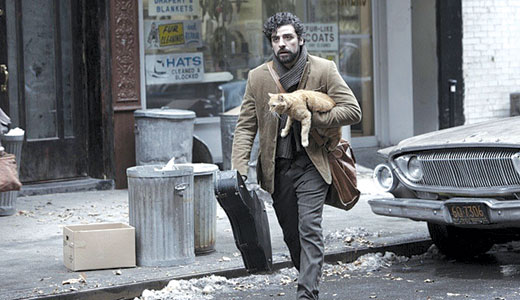 This popular Coen Brothers indie stars Oscar Isaac from “The Bourne Legacy” as a young folk singer on a 1961 journey to discover … well, we’re not sure what he’s trying to discover, but being former plunk-and-wheezers ourselves, we found it very entertaining. True to life, Llewyn spends most of his days trying to scrounge a ride or a couch for the night from a dwindling collection of equally unpromising friends, and trying to get laid using his guitar. Beyond that, the story arc concerns the usual ephemera: big breaks, the constant penniless humiliation and brutal Greenwich Village winters. Man, does this sound like life or what?

In an abbreviated version of Markus Zusaks’ overreaching young adult novel, Sophie Nélisse plays the courageous heroine, forced to live with foster parents Geoffrey Rush and Emily Watson in a small German village. She comes to love books just as the Nazis start burning them, setting in motion a series of very real events leading to the girl and her foster family harboring a young Jew from Nazi persecution. But this isn’t an action flick; it tells its story in a meandering, laid-back fashion, letting each participant’s tale become flesh, then bond with the others. Rush couldn’t really make a boring film, now could he?

DOCTOR WHO: THE TIME OF THE DOCTOR

The end of the line for Matt Smith’s very human 11th Doctor; a one-hour follow-up to the “Doctor Who 50th Anniversary Special.” Here he rescues gorgeous Jenna Coleman from a deadly dull family Christmas dinner to visit an insignificant planet/town called Christmas, under siege by the Doctor’s worst enemies. And it’s there in a rather dense time-travel plot that we see how the show finally deals with the immutable Time Lord law limiting him to 12 regenerations. And thus we meet the 12th Doctor, Peter “World War Z” Capaldi. Goodbye, Matt, you will be missed.

END OF THE WORLD

Classic SyFy Channel crapola of the best sort. Greg “Heroes” Grunberg and Neil “Eureka” Grayston are disaster-movie nerds who see an apocalypse on the horizon, even if no one else does. So they “rescue” their favorite end-times movie actor (Brad Dourif) from the asylum and — with help from a handy nuclear freakin’ warhead! — set out to save the day. Lots of neat cameos from other SyFy veterans and the usual uber-cheezy digital effects are lifted by the banter, innocence and asininity of the two leads.

This gay teen comedy has become a respected hit, taking “Glee” audiences a bit further into their continuing infatuation with queer romance. Cameron Deane Stewart dates girls while quietly spooning quarterback Justin Deeley (“Drop Dead Diva”). Gorgeous babes Meaghan Martin and Ally Maki are quietly more than just BFFs. These and others form a club as a cover to get together privately — calling it the Geography Club so no one else will crash the party! Then others discover it is the perfect place to open the doors to their own closets. Fun, funny and romantic. What’s not to like?

Jason Statham plays his usual hard-as-nails deadly action-guy to perfect effect, helped by a great supporting cast including Winona Ryder, baddie James Franco and dream-date Kate Bosworth. He’s a widowed ex-DEA agent who retires to a seemingly quiet little town to raise his daughter (cute Izabela Vidovic from TV’s “Zombieland”), which would have been great, except for all the crime and drugs going on under Sheriff Clancy Brown’s watch. An exceptionally rousing actioner; written by Sylvester Stallone.

OUT OF THE FURNACE

What do you get when you combine the talents of Woody Harrelson, Christian Bale, Casey Affleck, Zoe Saldana, Sam Shepard, Willem Dafoe and Forest Whitaker under the command of the writer/director of “Crazy Heart”? One seriously interesting movie! Bale works in a steel mill and takes care of his dying father. His brother (Affleck), fresh from Iraq, makes some bad choices, then vanishes mysteriously. The cops haven’t a clue, so Bale dedicates his life to finding his bro — dead or alive — and exacting justice. Is it any good? With this pedigree, how can it not be good?

Yeah, it’s a quickie mishmash of tropes from “The Hunger Games,” “The Hangover,” “Ted,” “Thor,” “The Hobbit” and several other pop-culture touchstones starring no one in particular. Our favorite bit involves “The Johnny Depp District,” which takes a very brief and loving — if disrespectful — poke at Depp as pirate, scissorhand, singing demon barber, Indian, etc. Won’t change your life or anything, but gangs of goofy fun.

THE SCIENCE OF MEASUREMENT

The guys behind BBC’s “The Story of Math” return to show just how absolutely fascinating simple scientific concepts can be. Here they look at how man, watching the seemingly chaotic miasma of seasonal change, has distilled an ever more precise understanding of time, motion, gravity, geometry, mass, energy and ourselves. In fact, we now understand that all of “reality,” including our history and culture, is based on just seven precisely measurable things. It’s like holding all the answers to the universe in your hand. Buy it.

Takeshi “Beat” Kitano proves once again to be Japan’s most consistently entertaining moviemaker. Here he’s on familiar turf as a supposedly dead Yakuza, trying to slip into quiet retirement, only to be used as a pawn by an ambitious cop (Fumiyo Kohinata of “Ringu 2”) to spark a mob war. Typically brutal, violent and bloody with over-the-top gun battles, all choreographed in director Kitano’s patented operatic style. Always welcome.

An amazingly taut performance by 20-something Korean rapper Seung Hyun Choi anchors this tale of the teenage son of a disgraced North Korean assassin who agrees to take up the family business to protect his little sister from the labor camps. Once undercover in a SK high school, he rescues a classmate (with the same name as his sister; a classic Korean touch), putting him the crosshairs of both North and South killers/spies. Terrific action sequences.

Iain De Caestecker (scientific genius Leo Fitz from “Agents of Shield”) stars in this very English take on the “attractive young couple, lost on a darkened roadway in the middle of nowhere, stumble into evil” genre. Pretty little NZ native Alice Englert from “Beautiful Creatures” plays the girl, with Allen Leech from “Downton Abbey” as their newfound “friend.” We liked it.

Young Spencer Lofranco, who made a name for himself by upstaging Andy Garcia and Vera Farmiga in the romcom “At Middleton,” repeats his insolence in this true tale of violence and redemption. He plays James Burns, a very bad Denver gangbanger who winds up in federal prison while still a teen. There he meets hardened baddie Roc (Michael Trotter). Somehow, the wizened con gets through to the kid that he can still turn his life around. Lots of big names in the cast, but Lofranco holds his own nicely. Check it out.

A quartet of very average, if bored, young black adults, looking for any spark of human contact, come together as a group after two of them — online chat buddies — decide to meet face to face. A perfect example of the modern urban indie drama, powered by honest emotion and simple motivations, aiming only to entertain and maybe start conversations among viewers.

Filmmaker Ken Burns, neurologist Oliver Sacks, writer Rick Moody (“The Ice Storm”) and Shakespearean actor Brian Cox, among others, pair up for completely unscripted, wildly fresh and inventive conversations in this brilliant work originally created as a web series These are some of the most gifted minds on the planet, and each has a clear and unique insight into the nature of reality, man, science and philosophy, making this a video that you will be talking about for days. Gather your best friends together and prepare to blow their minds.

A surprisingly original actioner that deserves a bigger audience. A British soldier-for-hire, big Craig Fairbrass (you’ll recognize him), arrives in L.A. expecting to find his daughter (knockout babe Shannon Elizabeth) dead, but the truth is far more disturbing. He recruits cop Jason Patric (“In the Valley of Elah”) to help him find her, and the trail leads to an evil Steve Jobs-inspired billionaire played by James Cann, who puts an impenetrable army of baddies in his way. Noisy, mindless fun.

The Transformer series that introduced us to the Mini-Cons, tiny robots who give their possessors a tremendous increase in power, which some use for good and others for evil. Unlike most of the Transformer series, it is more stand-alone, though integral to the established Cybertron pre-history, introducing a number of unique characters including Sideways, Scavenger, Blurr, Thrust, Tidal Wave and the apocalyptic Unicron (who ultimately destroys the planet Cybertron). A long-missing piece of the Transformer’s puzzle, finally available on home video.

Not to be confused with that History Channel soap opera, this is the BBC miniseries that inspired it. Historian Neil Oliver introduces us to some of history’s most interesting and misunderstood residents as he exposes the real truth behind the (errantly) horn-helmeted barbarians we’ve come to expect. Consider this: In just 200 years – the same age as the U.S. – they went from being illiterate pagan savages, raiding Anglo and French fortifications, to a well-read Christian farming culture with a sophisticated and surprisingly strong form of government that still works today. There may be hope for us yet!

Abigail Breslin, Alexa PenaVega, Sean Bean, James Purefoy and (shudder) Jake Busey are just a few of the names in this cameo-laden tale of a young woman (Breslin) and her dysfunctional, drug-fueled crime family in the American South. The game of chess becomes her mental escape, until she realizes that her violent and unpredictable peers are no more than pieces on a chessboard — and she has become a master of clearing the board. It’s one pretty bad B-film, but we were entertained.