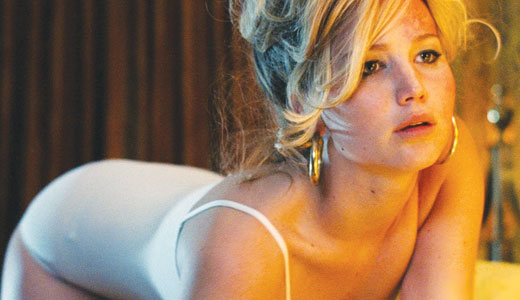 Oscar-laden local lass Jennifer Lawrence once again uses her enviable talents to effortlessly become the wild card in an unpredictable game of politics, crime and money (OK, that’s redundant). Based on real events in the ’70s, Christian Bale plays her husband, a balding con artist who hangs with sultry Amy Adams, all under control of FBI guy Bradley Cooper, who forces them to con deadly Jersey mobsters, with Jeremy Renner destined to take a fall no matter how this game goes down. No action, no heroes, with a plot that changes minute by minute, but damn entertaining nonetheless.

We’ve not been big fans of Der Mouse’s corporate output of late, but we think even Uncle Walt would have loved this spry and original CGI tale of sisterly love overcoming all. Big Sis possesses a terrible power that she hides from the world — and her little sister, lest she come to harm. But when Big Sis’ powers cause tragedy, she hides herself away to protect her loved ones, setting in motion a brilliantly animated, song-filled journey with original characters and vocal talent that made us actually say “Wow!” in a crowded theater. Simply perfect; a must-own regardless of your age.

This BBC series screws unnecessarily with Greek myth, but its low-rent mix of action, romance and CGI (reminiscent of the similar “Sinbad”) never takes itself serious enough to be offensive. Jason (Jack Donnelly) looks for his lost father in the fabled kingdom of Atlantis, fighting the Minotaur, beasties, goddesses, sirens and priests along the way. Educated by Pythagoras (Robert Emms of “War Horse”) and saved by the might (and girth) of a chubby Hercules (Mark Addy of “Game of Thrones”), they fight and laugh their way across the mysterious land. A family-friendly bunch of fluff that’s brainlessly entertaining and proud of it.

An overlooked Mexican entry in the “kids disappear into the woods, then come home with something invisible” genre. Simple, uncomplicated storytelling that wallows in nudity, gore and sex — including pedophilia and incest — illustrates why we’re so fond of Mexi-horror: American spookers just seem to have forgotten that we crave shocks. Wonderfully offensive in the best sense.

Idris Elba (Heimdall, guardian of the Rainbow Bridge in “Thor”) portrays South African leader Nelson Mandela in this biopic based on Mandela’s autobiography. Arguably the most iconic leader of the 20th century, he spent 27 years in prison for being a dissident in the days of Apartheid, only to leave prison, publicly forgive his jailors and be elected president. Mandela’s life unfolds brilliantly in this excellent treatment with a cast that includes Naomie Harris as his wife, Winnie, and Tony Kgoroge from “Hotel Rwanda” as ANC President Walter Sisulu.

To those of us of a certain bent, the original 1986 “Class of Nuke ’Em High” was a life-changing event: the breakout hit of Lloyd Kaufman’s Troma Studios about a motley high school full of drugged-out crazies smoking atomic-waste dope to a loud, angry soundtrack. It was so cool! This “return” is a nice updating of the Tromaville standard, with mutated monsters, murder, mayhem, some skin, bad acting, worse special effects and deadly funny dialogue. Two cuties, Asta Paredes and Catherine Corcoran, learn that the glee club has morphed into a subhuman gang, and more uglies are to follow! Come on, you know you want to …

The true story of Walt Disney’s 20-year battle to create “Mary Poppins.” Tom Hanks is a delight as Uncle Walt, who, inspired by his daughters’ love of the P.L. Travers book, sets out to do a nice “kiddie show,” unaware the author (Emma Thompson) is an unrepentant hard-ass who sees him as just another Hollywood suit out to bespoil her work. She nixes animation, hates the cast, hates the songs and is clearly leaning toward another studio’s offer. But there is a secret behind Travers’ abstinence, one that will require all of Disney’s boundless charm, wit and compassion to overcome. Simply wonderful.

Cult genius Roger Corman’s greatest film? Well, maybe not, but certainly one of his most enduring, now on Blu-ray. A teenage girl, home alone, decides to have a slumber party, unaware that a driller-killer is on the loose. He peeks in the windows (a nightie watchman perhaps?), enjoying the ripe teen flesh, when a brouhaha ensues, dividing the girls into smaller groups for easier disposal. Lots of blood, mountains of 20-something “teen” mammaries, showers galore, and neither plot nor motivation to get in the way. A series of sequels ramped up the nipple count to great effect. We do feel cleansed.

Chase “John Dies at the End” Williamson is the titular everyman, cursed with superpowers, who turns super-vigilante when his parents are killed. To make matters worse, he falls hard for Ashley “Lady Heavenly” Bell, just as his mysterious savior, Clancy Brown, reappears. Set in the ’40s, this low-budget comic-booker does a damn fine job of competing with the mega-budgeted likes of “Iron Man” and “Thor,” with a cast that includes (ugh) Jake Busey, William Katt, Marina Squerciati and more. Check it out.

Holland, the man behind such greats as “Child’s Play” and “Fright Night,” dreamed up this Australian TV horror series, breathing much-needed new life into the ailing genre. A passel of experienced horror-vets (Danielle Harris, William Forsythe, Sarah Butler, etc.) populate nine cleverly macabre shorts that remind us of “Twilight Zone” entries — if Rod Serling was a demon-worshiping child-eater! But beyond the easy shocks and ironic endings, each is a master class in screenwriting. Extremely good.

A no-budget mix of idiots in the woods, licentious mates and, of course, zombies that is clearly having fun with its premise. Matthew Albrecht gathers three morons together for a hunting trip, just as he learns that his fiancée is banging his best man. And it all goes straight to bloody hell with the accidental shooting of the landowner. Add in a “chupacabra virus,” a drugged Game Warden, refugees from the Jersey shore, your basic inbred hillbilly gang led by a delusional Limey king-wannbe, and D-cup model Meg Cionni — what more could you want?

Arkansas-born no-budget-horror filmmaker Eric England has finally hit his stride with this tale of a young woman (Najarra Townsend) who breaks up with her girlfriend (blonde hottie Katie Stegeman), then catches the clap from some guy at a party. Forced to move back in with her screaming mother while hiding her ever-mounting symptoms, she thinks life can’t get any worse. But it’s not an STD, of course, it’s a … We won’t spoil it, but if you like your horror sexy, bloody and bi, you’re gonna love this.

This show was far better than viewers expected, and lasting five seasons in the fickle hands of ITV and CBS is proof of its appeal. Enrico Colantoni, Hugh Dillon, David Paetkau and “Pink Ranger” Amy Jo Johnson make up a crack SWAT team charged with saving the day amid kidnappings, arsonists and mad-dog killers. The producers pulled out all the stops for this series finale with a terrorist bomber targeting the city’s downtown buildings, culminating in the most realistic loss of life — including the stars — we’ve ever seen on a TV cop show. It was devastating, moving and quite real; something few shows ever pull off. This will be missed.

Imagine “World War Z” without the zombies, but featuring a disease that can kill in 3 seconds, and you get the idea behind this excellent South Korean epidemi-flick. After immigrants supposedly contaminate a Seoul suburb (xenophobia, anyone?), mass death and panic follow, leading the government to quickly wall in the infected area. But a pair of dedicated specialists must get inside and locate the original source of the infection if a cure is to be found. The fate of the entire world lies in their hands — and the army has orders to shoot anything that moves!

Man, what a hoot! This indie Euro-sci-fier has everything that a movie-geek could want. Leggy Nazi babes? Check! Secret Moon bases? Check. Horror vets? Check! Steampunk flying saucers? Check! It seems that the Nazis fled to the dark side of the Moon once they saw that they were going to lose the war. There they built massive works, including an armada of flying saucers, and now plan to re-invade Earth from the skies! With lots of scary German hotties, a female U.S. president and the inimitable Udo Kier as Wolfgang Kortzfleisch. Finally available in a two-disc set including 20 extra minutes of screwy Nazi goodness; you gotta check this out.

On the face of it, turning Dunham’s brilliant live ventriloquism into a cartoon seems kinda, well, dumb. But you can’t argue with the result as the dread Dead Terrorist skeleton finally lives out his dream of infiltrating (badly) American society where he can (badly) commit slapstick acts of violence. Problem is … he really comes to like it here. They don’t have frozen yogurt on the desert, much less all-you-can-eat buffets! We still missed Dunham’s live antics, but have to agree that this is fun.

Thandie Newton –—one of the hottest women on the planet, in our humble opinion — is a force of nature in this dark cop/murder-mystery series from Direct TV. Conflicted and coming off the rails after her son’s death, she’s a cop who starts sleeping with the son of the biggest mobster in town (Marton Csokas) to pump him for information. But the rest of the cast gives her a run for her money, especially Leah Gibson (who, like Newton, has explicit sex scenes) and little Sarah Jeffery. An explosive drama for adults: daring, extremely well written, provocative and very, very dark.

An exceptionally engaging and thought-provoking modern adult drama, in which the constant search for love, success, fulfillment and sex comes to define a group of attractive, likeable people. Leroy McClain (“The Adjustment Bureau”) and Charlie Barnet (“MIB3”), in particular, struggle with their sexual identities, but the concept of “normal” quietly haunts the entire group as they seek relationships, both “open” and private, which never seem to be fulfilling or long lasting. This is why we love indie cinema!

THE WRATH OF VAJRA

The Temple of Hades, a Japanese death-cult, attacks China with its own children — kidnapped, brainwashed and trained as assassins — in the opening days of WWII. But one child accepts the training gladly, secretly planning to use his incredible skills to avenge this atrocity and the death of his brother. A good old-fashioned Kung Fu free-for-all that reminds us of the heyday of the Shaw Brothers. Stars first-time actor and former Shaolin Monk, Xing Yu. Cool.