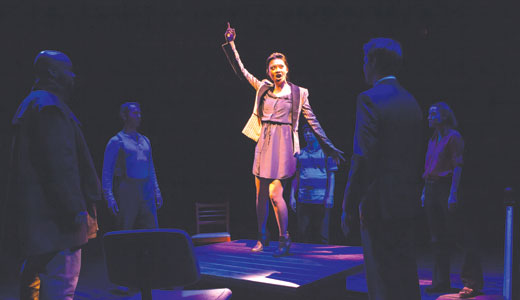 All those elements come together in Harrison’s “The Grown-Up,” a sparkling new play that opened Sunday as part of Actors Theatre’s Humana Festival of New American Plays. The production plunges through time and space and ideas so fast it would be hard to keep pace — but for the clarity and precision of Ken Rus Schmoll’s direction.

The story begins with a family yarn (recounted with wry irony by Paul Niebanck) about a piratical ancestor who sailed the seas and long ago brought home a mermaid’s eye that looks like glass (or maybe crystal) and functions as a magical doorknob that offers passage to many times and places. But there’s a catch: Until you pass through the portal, it’s impossible to know where you might wind up.

During a game of hide-and-seek with his sister, young Kai (Matthew Stadelmann) plays a cruel classic trick on his pesky sister. Then he disappears. As his forlorn sister (Brooke Bloom) puts it, they were playing hide-and-seek — and Kai won.

That sets Kai off on a series of adventures. He endures an interview with a supremely sleazy Hollywood executive (played with vulpine glee by Chris Murray) and his assistant (played by Tiffany Villarin in a dazzling hyper-caffeinated tour de force). He travels back in time for a stint as a cabin boy where he clings to a precarious perch in the midst of a tumultuous storm. We watch him grow through love and marriage, and into decrepitude. And his plucky, determined sister — whose quest to find and return him to the family fold is the emotional center of the story — is always one step behind.

Across the board, the acting is superb. Most of the players are on stage most of the time, and we often see them popping up in subtly (or dramatically) different guises, like shape-shifting inhabitants of a dream. At one point, David Ryan Smith stands at the corner of a dark and stormy stage, rocking slowly like an old salt while he listens to sea shanties on a jam box; later, we see him as an elementary school teacher giving a powerfully vivid lesson on the nature of life.

And no matter the mood of the moment — cynical irony, emotional resonance or madcap slapstick, as in a chase scene where Kai’s sister rescues her wheelchair-bound brother from a nursing home — there’s never a false note.