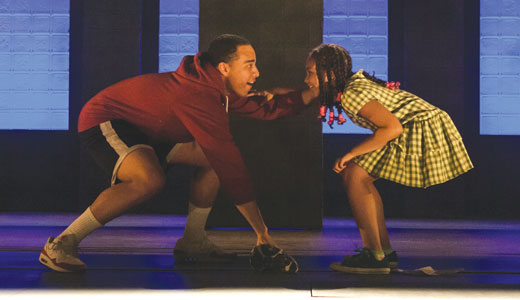 Great dramatic monologues often take on a life of their own, not only as audition pieces for aspiring actors and actresses, but also as crystallized manifestations of ideas and emotions. The opening moments of Kimber Lee’s “brownsville song (b-side for tray),” which opened Sunday night as part of the Humana Festival of New American Plays, is certain to have that kind of life.

First we hear the rush and rumble of urban streets, then a lone woman seated on the stage, her shadow rising high on the rear scrim, plunges us into a world of fire and tears. Her grief may be driven by an event — the senseless death of a young man. But her fury points at the way such events are recounted and interpreted — especially when the dead man is a person of color.

The speaker of this tragic monologue is Lena (Cherene Snow), grandmother of the dead Tray (John Clarence Stewart), and as she rails, we learn much about the things he was not. And most importantly, we learn his life shouldn’t be defined by the way it ended.

As the story spins out — moving back and forth through time as adroitly as Dane Laffrey’s sets — we catch glimpses in memorable vignettes that show us a boy growing into a man — and an outstanding man, at that. He’s a boxer and a student, resilient and self-reliant, independent and connected. Tray bickers affectionately with his “Grams” as he strives to build a grown-up persona. He brings compassion, wit, warmth and easy physical humor to scenes with his little sister, Devine (played with striking composure, grace and vulnerability by Sally Diallo), who is set to play a tree in an upcoming “Swan Dance.” Fine choreography, costume design (Connie Furr Soloman) and sound design (Jake Rodriguez) animate scenes where Tray whirls his sister around the stage and where Devine sways lyrically to a soundtrack that morphs easily from the lyricism of Tchaikovsky to edgy hip-hop rumbles.

And we see Tray confronting his stepmother, Merrell (Jackie Chung), a recovering alcoholic who is now trying to re-enter the lives of the siblings after abandoning them years ago. As Merrell helps Tray write a personal essay as part of the college admissions process, we see him chafing at the customary clichés and searching for an authentic and powerful voice.

He will find that voice — in another powerful monologue at the end of the play. But not before we’ve gotten to know him through his actions and words, his interactions with his family and the witness of Junior (Joshua Boone), his longtime friend who, in a finely honed scene, is asked by Lena to explain the incident that caused his death.

Lee’s script is full of hairpin turns and radical shifts in tone and mood — and director Meredith McDonough (with finely wrought lighting from Ben Stanton) creates a seamless experience that brings quotidian details and great themes together in a fine work of theater.