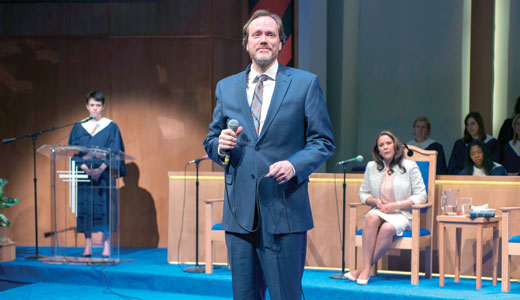 ‘The Christians’
Part of the 38th Humana Festival of New American Plays. Written by Lucas Hnath. Directed by Les Waters. Continues through April 6 at Actors Theatre, 316 W. Main St. For tickets and info, go to actorstheatre.org.

The carrot-and-stick theology of heavenly rewards and infernal punishments has been generating profound and colorful disputes among Christians since at least the fifth century, when Augustine of Hippo made the argument that because salamanders were alleged to live in fire, and because certain volcanic mountains in Sicily had apparently been on fire since antiquity while retaining their form, it must be the case that the living body of a sinful or unsaved human could survive everlasting flames without being destroyed.

Preachers, poets and artists alike have reveled in images of fire and brimstone, while intellectuals have argued the fine points of how sheep are separated from the goats, and especially the melancholy fate of those who — because they were before Christ, or lived beyond the geographic range of Christian teaching — are apparently consigned to hell because they never accepted the faith.

Playwright Lucas Hnath takes up that question in “The Christians,” which premiered last week as part of the second production in this year’s Humana Festival of New American Plays.

Hnath places his debate in the context of a mega-church with thousands of members who come together in a bright, typically suburban church with amenities like a coffee shop and a baptismal font “as large as a swimming pool.” As directed by Les Waters on a set designed by Dane Laffrey, with media designed by Philip Allgeier and sound by Jake Rodriguez, “The Christians” plays out as cunning, Brechtian theater of the mind, where limited but powerful stage action highlights the fascinating rigors of the argument — and in the end, accentuates the emotional consequences of the ideas.

Pastor Paul, played at first with cool authority by Andrew Garman, is an affable PowerPoint preacher who outlines his sermon in bullet points — for those who are keeping track. And at the beginning of the play, he announces that the church is at a watershed moment: It’s debt free. Then he shares an anecdote about a non-Christian who loses his life in a heroic tragedy. And that story, says Paul, has brought him to a radical epiphany about fundamental issues of church doctrine.

Paul’s is the sort of revelation that leads to schisms, and indeed, his associate pastor — played by Larry Powell, whose own personal revelation finds voice in a harrowing piece of acting later in the play — can’t follow in the path of his mentor. The dispute plays out in a series of scenes that pit Paul (who also serves as a narrator) against an avuncular church elder (Richard Henzel); a congregant (Emily Donahoe) who suspects Paul might be guilty of self-serving hypocrisy; and Paul’s wife, played by Linda Powell, whose note of fiery anger highlights the quiet intensity of everything that’s gone before.

Waters and Hnath have given us a rare and bold production. Like Dorothy Fortenberry’s “Partners,” which opened this year’s festival, “The Christians” is firmly anchored in the nature of its characters, unyielding in its logic and bravely unsettled in its heart.