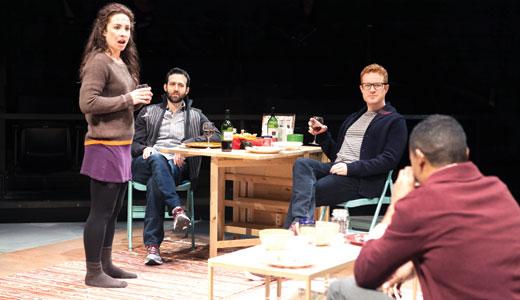 The details may change from century to century and country to country, but as a theatrical genre, the comedy of manners has stayed pretty much the same for at least a few hundred years.

That’s because its subjects — sex and money, and their associated rules, customs, morals and etiquette — are rich social battlegrounds: always in flux, always fascinating and always the stuff of gossip, speculation and strife.

In some plays, it’s the money that matters. In others, it’s the sex. But the finest examples are those where the playwright melds both together. And that’s exactly what Dorothy Fortenberry achieves in “Partners,” which opened Actors Theatre of Louisville’s 38th Humana Festival of New American Plays. Staged in the round in the Bingham Theatre, the production has a finely detailed look thanks to Daniel Zimmerman’s design, Paul Toben’s lighting, Janice Pytel’s costumes and some very effective incidental music and sound design from Lindsay Jones.

At the center of this story is Clare, a chef whose vulnerable, muddled idealism, acne-ridden insecurities and ambivalent ambitions give shape to a rich interplay of financial and sexual complexities. Played with disarming sincerity and conviction by Annie Purcell, Clare is obsessed with convincing her business partner and best friend, Ezra (Kasey Mahaffy), to — as she puts it — gay-marry his lover Brady (LeRoy McClain). She might be motivated by innocent compassion and a concern for her friend’s rights. But in a wry twist on a common anti-gay-marriage stance, she also feels that Ezra’s unmarried status undermines the validity of her own marriage to Paul (David Ross), whose ever-smiling, broadly jovial countenance is belied by a sharp-tongued superior wit.

As the play opens, we see the foursome dining and joking, and skirting gingerly around the topics of marriage and business. Then, when they part, Fortenberry lets the sparks fly in parallel scenes where the couples speculate in droll detail on one another’s sexual and financial habits and resources. And those speculations give way to a fast-paced tragic-comic reveal punctuated by a string of startling — but plausible — developments that present a series of tough dilemmas.

At one level, Fortenberry’s script is a marvel of quotable one-liners and deliciously funny allusions, but it’s also a work of tough-minded, character-driven logic that never panders to clichés or resorts to magical thinking. Lila Neugebauer’s directing follows the same path. These are fully realized characters, whether they’re bickering party-style over the relative moral importance of marriage rights or the plight of prisoners at Guantanamo; caught in moments of intimate vulnerability (as in a riveting scene where McClain and Mahaffy define Ezra and Brady’s relationship through bravura depictions of fear, anger and tenderness); or in moments of pure fury (as when Paul confronts Clare in the face of a stunning discovery).

And the play is a vehicle for true ensemble acting. Each character experiences transformative experiences over its course, and in finely tuned performances, each actor expresses those changes with exquisite fidelity to the character’s root identity.