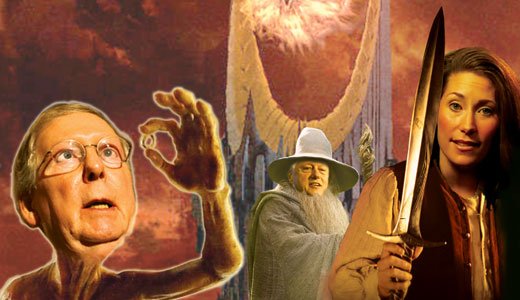 Kentucky is currently the center of an epic battle for control over Middle America, as the Free Peoples hope to wrestle power away from Sauron, the Dark Lord of Corporate America, who rules the federal government in Washington, D.C., with an iron fist.

Sauron’s rule is in jeopardy due to the presence of a magical ring, once belonging to Sauron, but now in the possession of U.S. Senate candidate Alison Lundergan Grimes. Grimes hopes to defeat Sen. Mitch McConnell this November, travel to the nation’s capitol and destroy the ring and Sauron by throwing it into the Oven of Morton’s — in the kitchen of Morton’s Steakhouse, the upscale restaurant where banking and corporate lobbyist and minions of Sauron hatch their schemes of domination over America’s government.

The ring was once possessed by Sen. McConnell, who found it while in office as Jefferson County Judge-Executive in 1982, using its magical powers to become a 30-year senator at the top of Republican leadership. But McConnell, once an honorable moderate, was quickly corrupted by the powers of the ring — often used as a puppet by Sauron as he possessed it — turning into a slimy, hideous creature that was reviled by voters in his state, with approval ratings in the low 30s.

McConnell is now following Grimes all over the state in an attempt to take back the ring and take advantage of its powers, though claiming he will now use its powers for good. At a press conference in Louisville last week, McConnell told reporters, “Preeeeeecious! I wants me precious!”

The minions of Sauron have also set out to find his ring and destroy Grimes. Sauron has formed a Super PAC — Ringwraiths for Strong Leadership — who are hounding Grimes with an avalanche of negative TV ads to sully her image among voters and keep her away from Washington. Additionally, Sauron is able to track Grimes’ movements when she wears the ring by the Eye of Morton, placed atop the pyramid on the back of $1 bills.

But Grimes is not alone on her journey to Washington to destroy the ring. At her side is her faithful companion and grandmother Elsie Case, as well as Viggo Mortenson, bringing with him a horde of Hollywood money to battle the Ringwraith PAC and an army of Orcs organized under the umbrella of Tea Party groups.

Grimes is also traveling with former president Bill Clinton, a white-haired wizard who has many years of political battle under his belt, as well as a magical staff. She also has powerful allies from different corners of the state by her side, including Greg Stumbo, a fierce dwarf hailing from the mountains of eastern Kentucky, and Congressman John Yarmuth, from the Elvish city of Louisville.

However, the power of the ring has also tempted to corrupt Grimes, just as it did McConnell before her. When she wears the ring, she knows its powers could bring a wave of corporate and coal industry money to her campaign, which could bring her a long career in the Senate, though also turn her into a puppet of Sauron.

Grimes has also used the powers of the ring to evade political journalists, who seek to make her path more difficult by asking her tough policy questions that she has been reticent to give direct answers to and provide more fodder for the Ringwraith PAC to attack her.

Following a campaign rally in Lexington last month, a pack of reporters surrounded her as she exited the event, with Joe Gerth of The Courier-Journal yelling out, “What would you propose to combat climate change? Should there be stricter EPA regulations over emissions from coal-fired power plants?” Caught off guard by the question and reporters, Grimes slid the ring onto her finger — making her invisible — and scurried past them onto her campaign bus.

Kentucky liberals — hoping to wrestle the corporate control of D.C. away from Sauron — are hopeful that Grimes can evade McConnell and the Ringwraiths and make her way to the U.S. Senate to destroy the ring, but are also fearful Grimes will succumb to the temptations of the ring.

“Don’t get me wrong,” said Louisville environmental activist Sarah Lynn Cunningham. “I’m the last one who wants our government ruled by Sauron and his minions, and we all know that we can’t let the ring fall back into the hands of McConnell. But if Grimes is able to win the election, can we really trust her to destroy the ring and not become a hideous creature whose morality is thoroughly corrupted by the great power of the ring? I don’t have the answer to that, but at this point, she appears to be our only hope.”

Grimes was last seen traveling through the Misty Mountains of eastern Kentucky with Case, Clinton, Mortenson, Stumbo and Yarmuth, though her current whereabouts are well-hidden to avoid the menacing glare of the media, Orcs and Ringwraiths. The ending of this epic tale has not yet been written.