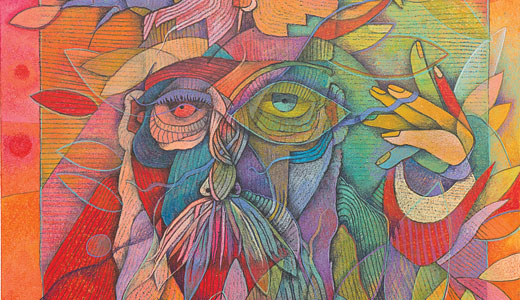 Drag City recording artists New Bums are gracing Louisville tonight with a performance. The band is touring in support of their very recent, critically acclaimed debut album, Voices in a Rented Room. Comprised of Ben Chasney of Six Organs of Admittance and Donovan Quin of the Skygreen Leopards, New Bums identify as “the sound of Old Drunk America,” a fair enough description, although the duo lack that kind of rowdiness you may attribute to, say, Hank Williams Jr. This is more the kind of Old Drunk America that sips nice bourbon on a porch and talks with his pals about the good old days, but who probably isn’t going to threaten kids to get off his lawn. Opening up are Wrekmeister Harmonies and Ryley Walker, both likely to please. —Syd Bishop

U of L’s Floyd Theater

U of L’s Anne and William Axton Reading Series welcomes former creative writing fellow Austin Bunn back to ol’ Louisville for a screening of the recent feature film “Kill Your Darlings,” which he co-wrote with the director. The acclaimed indie, which premiered at Sundance and won a top prize at the Venice Film Festival, stars Harry Potter as the trailblazing Beat poet Allen Ginsberg, alongside rising star Dane DeHaan and Michael C. Hall, star of the formerly beloved “Dexter,” as less famous OHs (Original Hipsters). Bunn, now an assistant professor in performing and media arts at Cornell University, will lead a two-hour master class at 10 a.m. on Friday, in addition to the screening. Bunn also co-wrote the book “A Killer Life: How an Independent Film Producer Survives Deals and Disasters Far From Hollywood.” —Peter Berkowitz

Ever since Facebook COO Sheryl Sandberg released the wildly successful but highly contested book “Lean In,” there’s been a lot of talk about women and the path to success. What does that even mean? How do we get there? Is there such a thing as “having it all”? At their core, each of the questions is about how a person defines herself and the decisions she makes. Perhaps this complex, irrational, emotional topic is best explored not in the real-life memoir of one Silicon Valley superstar but through finely crafted fiction that’s able to focus on humanity in a way a call-to-action faux-self-help book cannot. Gina Gionfriddo explores these topics in “Rapture, Blister, Burn,” a witty and moving play about two friends who’ve taken very different paths in life. The Bard’s Town opens its season with this powerful piece, which was a 2013 Pulitzer Prize drama finalist. —April Corbin

U of L’s Student Activities Center

Life doesn’t have to be a drag, especially on Friday night at U of L when the students present the annual “PINK” benefit, an amateur drag and variety show that raises money for U of L’s LGBT Center. “PINK,” which has nothing to do with the acrobatic pop star of the same name, holds the record as the longest running student organized fundraiser on campus. Reva Deveraux, also referred to as the “Mother of the House of PINK,” will host the festivities, which include first-time performances from some brave and daring souls. Expect music, dancing, drinks and wild and crazy performances from both veteran and rookie dragsters. —Sara Havens

If someone pitched a novel or movie about 16 people rowing across the Atlantic Ocean in an experimental lifeboat, nobody would blame you for saying it sounded crazy and unrealistic. If said adventure actually happened, though? Now we’re talking! Enter the documentary “The Big Blue” and the book “Little Ship of Fools,” which make their Kentucky debut this weekend. Both tell the tale of an improbable seven-week expedition during which the crew dealt with running out of food, bad weather, boat problems and the general discomfort of being stuck in a small space with 15 other people. Louise Graff, who grew up just outside of Louisville, was one of the participants. She and fellow crewmember Charles Wilkins (the author of “Little Ship of Fools”) will be on hand at the screening and book event for a meet-and-greet. —April Corbin

If your fantasy escape scenarios look anything like Don Draper running off to southern California, then surely you know about Repurposed Modern, Louisville’s premier mid-century modern gallery and retail store. Now, in addition to salivating over exquisitely designed couches, ashtrays and other necessary home accessories from the post-war era to the post-“Brady Bunch” era, you can also check out an art show featuring new works by Tom Cannady. “It Seemed So Simple Then” is a collection of paintings influenced by mid-century design and the new suburban American lifestyle. Cannady, who studied at Murray and has been working for 35 years, takes a fuzzy look at a world many took for granted at the time, aside from being inundated by its influence on every corner. The show will run through May 4 (Derby weekend, y’all). —Peter Berkowitz

On their most recent album, last year’s Jeff Tweedy-produced The Invisible Way, minimalist indie pioneers Low gave more mic time to drummer Mimi Parker, possessor of one of the most beautiful singing voices in (semi)popular music today. The band was drawn to Tweedy’s studio because of trust and friendship built up through touring with the producer’s band, Wilco, and because of what they’d heard of his recordings for Mavis Staples: “big, simple, raw and intimate,” they say, which is a pretty slick way of summing up their sound, anyway. The Duluth residents are kind enough to stop off here on their way to Knoxville’s Big Ears Festival, where they will play along with Television, Jonny Greenwood and Louisville’s own Rachel Grimes. Tonight’s show, though, will include an opening set by the similarly big, simple, raw and intimate Sandpaper Dolls. —Peter Berkowitz

Get ready for American Gothic heaviness as Seattle’s Earth swings by on their way to Knoxville’s Big Ears Festival. Formed in 1989, Earth has evolved over the years drastically from their early music, best described as drone metal, to the desolate instrumental Americana of recent albums. The through line is founding member Dylan Carlson and his dedication to creating music that meditates on ambience, finding peace in between the notes. Their previous record, Angels of Darkness, Demons of Light II, saw Earth exploring the same glimmering desert landscapes for a sound that is definitively Western but certainly not country. Also playing is former Emeralds guitar titan Mark McGuire, whose music is both serene and taut, with lulling drones and soaring, epic highs. Prolific, McGuire is hard to pin down. —Syd Bishop

It’s not even Derby yet and we’ve got some pretty big (but nerdy) names coming into town for Louisville’s annual Comic Con next weekend. Hosted by the folks at Wizard World, the three-day sci-fi and comic book fest will feature Jon “Napoleon Dynamite” Heder, Dean Cain of “Lois & Clark” fame (one of my favs!), some of the cast from “The Walking Dead” (Norman Reedus, Jon Bernthal, Sarah Wayne Callies and Scott Wilson), Michael Rosenbaum of “Smallville” and Robert Hays from “Airplane!” As always, there’ll be vendors, seminars, autograph sessions, people in costume, movie screenings, parties and much more to keep that inner geek fire burning for another 365 days. Three-day passes are available, but you probably already knew that. Live long and prosper. —Sara Havens

If it may please the court, artist Bob Lockhart has confessed. He says he’s a thief, justifying it by quoting Picasso (“Good artists copy. Real artists steal.”). He’s also “lifted” from Braque, Modigliani, Klee, Chagall and Kandinsky. “In preparing for this 2014 solo exhibition (of ceramics and drawings),” Lockhart explains in his defense, “I took on the task of studying and researching extensively and exclusively the images and ideas surrounding the specific artists … From this, my own meager thoughts about these works and how they apply to my current practice guided me in the creation of works that you see (in the exhibition). This is the best I can do at the moment, but I’m still practicing in the hope that during my lifetime, one might be decent.” Verdict: Good art. —Jo Anne Triplett

The hundreds of odd shapes and colorful bits that make up one of Brad Devlin’s “Boxed Sets” pieces in the artist’s show at Galerie Hertz would be proud to know that they’ve come up so far in the world. Ordinary things in their first lives, utilitarian pieces of glass and wood, and oddly artistic shapes of metal and plastic are now hammered into dramatic new configurations that may or may not mean something. The final results are certainly interesting to see — and examine — with titles like “Dry Run,” “Collision Course” and “Language Barrier.” All the finished works are uniform in size, built up from behind to make a flat plane surface. Sometimes extra neat small bits are arranged behind clear plastic windows. “I’ve always liked to put things behind Plexiglas,” says Devlin. “Makes them seem more important. Like they’re in a museum.” —Bill Doolittle

There are plenty of people who mix art and politics, like political cartoonists. Political ceramicists? There’s at least one: Wayne Ferguson. If you want to “Ditch Mitch,” he’s the artist for you. Ferguson’s been long known for his skill, humor and interest in social issues. All are mixed together in his solo show of clay works and drawings at CRAFT(s). “Politics, religion, oil spills, mountain-top removal and vestiges of my youth (are on display),” Ferguson says. “My favorite aspect of the show is my tchotchke, souvenir and hillbilly art roadside stand reminiscent of a place on old Rt. 25 where we may have stopped on our way to visit relatives in Chattanooga in the ’50s. I took the ‘fine’ out of fine art and replaced it with ‘fun.’” —Jo Anne Triplett