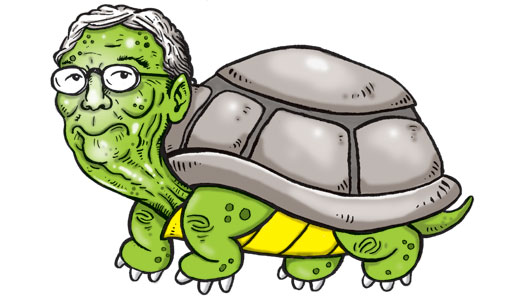 Aisle Help You Out

Management at the Highlands Kroger now admits they underestimated the impact that rearranging their aisles would have on residents. Customer complaints are at an all-time high, with some people reporting getting lost and disoriented when their attempts to find Special K snack bars resulted in nothing but shelves upon shelves of dog food. In response, Kroger will offer a one-hour seminar entitled “Aisle Help You Out” to break down what is where. It will also include a hands-on tutorial on how to use the self-checkout without getting stuck on the “place your product in the bagging area” screen. “It’s about time they had this. I haven’t been able to find quinoa or my gluten-free juice cleanse in a week,” said one relieved customer we spoke to. “I’ve had to eat out every night this week.”

The latest Bluegrass Poll shows that 80 percent of Kentucky voters strongly agree that Sen. Mitch McConnell looks like a turtle. It is time for someone to wrangle that turtle into submission. That’s the message put forth by the creator of a new Super PAC backing Tea Party candidate Ernie Brown Jr., aka Turtleman, star of “Call of the Wildman” on Animal Planet. “He’s spent years wrestling the commonwealth’s wildest animals. He should be tackling the biggest beast of all — politics,” said founder Raphael, a former Teenage Mutant Ninja Turtle who parlayed his own entertainment success into achievements in the political arena. When reached for comment, the Turtleman released this statement from his shack in Lebanon, Ky.: “Ever since Mother Jones exposed my reality TV show as being fake as fuck, I’ve had to reevaluate my career options. I could be senator. Why not? Yeee yeee yeeee!”

Mixologists have heard the whines — “It’s taking too long,” “Hurry up with my old fashioned, man!” — and one of them is doing something about it. Jared Schubert, head bartender at the Monkey Wrench, is mixing up a new kind of bar experience — one that merges the complexities of drink crafting with comedy. Now, instead of waiting in silence while he prepares your mint julep, you can listen to Jared do a full comedy routine. “Sarah Jessica Parker walked into the bar and the bar tender said, ‘Why the long face?’” Jared said as he muddled the mint. “Charles Dickens walks into a bar and orders a martini. The bartender says, ‘Sure thing. Olive or twist?’” Jared’s routine lasts nearly 30 minutes, and I must admit it made the experience of ordering a drink riveting. I was so enthralled, I stood there and ordered five more.

An epic jam-band show of historical proportions is taking shape, and you won’t want to miss it. The Grateful Dead, The Allman Brothers Band and The Band will all perform for an audience that is expected to top 600,000 and is being billed as “The Largest Music Gathering Ever.” The show offers a rare opportunity to see such now-dead or nearly dead giants as Jerry Garcia, Bobby Weir, Phil Lesh, Robbie Robertson, Levon Helm, Greg Allman and Dickey Betts perform live on stage. Sure, you’ll have to travel in both space and time, because the concert takes place in Watkins Glen, N.Y., in July 1973, but if you want it bad enough, you will find a way, man. You will find a way.

You know how sometimes you just gotta be shootin’ some stuff? When that feelin’ comes over you, here’s what to do: Go out and get your ass busy shootin’ some stuff! Ka-BLAMMY! Get your gun or your mama’s gun or your neighbor’s gun and do some rootin’ tootin’ shootin’! Dow dow dow, kkkktat-a-tat-a-tat, cutta-cutta-cutta, BOOM! Of course, you’ll also need some stuff to shoot! It could be empty cans or full cans or an old dumpster with rats in it or an old washing machine or rusty Ford Explorer or “The Book of Virtues” by William J. Bennett or a sock full of poop or an old lamp or that old Agents of Fortune record by Blue Oyster Cult — the one with “Don’t Fear the Reaper” on it — or a bottle of Moet & Chandon, it doesn’t really matter, just get some stuff and shoot it! Ker-POW! Hell yeah.

Deep down, we all know you Kirstens secretly want be called Kristen. Maybe your parents thought they were being original, or maybe the name has just been passed down from generation to generation as punishment for your great-great-great-greatX64 grandfather stealing a potato from his neighbor in Scotland. Whatever the case, the city of Louisville knows how annoying it is to constantly correct people — “No, it’s Kerrrrsten” — so they’re offering a free name change to any Kirsten, Kirsty, Kirstine, etc., who would like to move through life a little easier and a little less complicated. The event, held at the Jefferson County Clerks Office, will be hosted by actresses Kirstie Alley and Kirsten Dunst, who will be first in line for the name change, and features live music by Kirmmet & Doug and free bumper stickers that read: “My Kristen beat up your Kirsten.”

Kenny and the Nutjobs

Stop the press! Some obscure cover band is playing at some bar in Middletown on Tuesday. Is it too late to get a feature article on this? Maybe a cover? (These were things said to us last Saturday when we were at lunch with our family and not at work, but this one guy we know because he’s friends with this other friend of ours came over and asked us to write about his shitty cover band that’s playing at some bar very late on Tuesday.) So, all right, Mike, here’s your write-up: a group of some average guys in their late 40s who like to get together and play covers of ZZ Top, Rush and the Stones is playing. That’s just about what our readers are most interested in, right? Thanks for all the follow-up voicemails, Mike!

Go beyond the Watterson

Beyond the Watterson Expressway

Has it been ages since you’ve traveled outside the Watterson Expressway? You might be surprised what you’re missing. It’s no longer simply a bleak hellscape of dreary warehouses, dreadful strip malls, little boxes made of ticky-tacky, and shiny, gated ghettos for the leisure class. Nowadays, you’ll find all of that plus some of Louisville’s best restaurants, including Vietnam Kitchen and Mojito. Also, some robber barons built a sweet-ass park, way out there somewhere, probably near Middletown. Further afield, there’s Berea, San Francisco, Tokyo, Buenos Aires and the majestic ruins of Inca civilization at Machu Picchu. So if it’s been a while since you’ve been outside the Watterson, maybe it’s time to give it another look. Despite the imposing raised highway and its forbidding concrete and exhaust fumes, there are convenient underpasses and overpasses all over town. Go beyond the Watterson today and see what you’ve been missing.