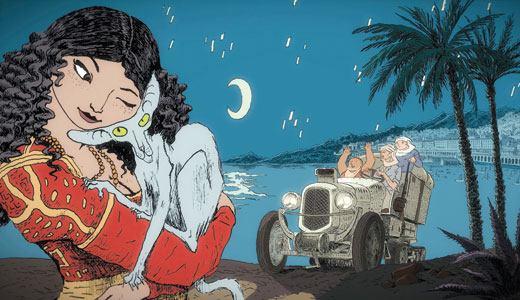 French Film Festival @ U of L

Floyd Theater, U of L

Louisville’s Tournees French Film Festival closes its 2014 month in the Student Activities Center with “Le Chat du Rabbin,” also known as “The Rabbi’s Cat”. The beloved animated movie about a rabbi and his talking cat was based on the highly acclaimed and also best-selling graphic novel by Joann Sfar. That the cat is described as “a sharp-tongued feline philosopher brimming with scathing humor and a less than pure love for the rabbi’s voluptuous teenage daughter” should tell you if your children are old enough yet to take in this non-Disney story. (Also, it’s in French, with subtitles). A post-screening discussion will be moderated by University Film and Digital Media Studies professor Dr. Andrew Cooper. This is a free screening, open to the public and suitable for most. —Peter Berkowitz

A shy undertaker in love with a local real estate agent, a Los Angeles drifter who steals jewelry from the deceased and a widow who discovers her shady contractor husband left her in debt to the mob: these comic and dramatic monologues — “Tell-Tale,” “The Thief of Tears” and “Thirteen Things About Ed Carpolotti” — make up the trifecta of the production “Three Viewings.” Set in a Midwestern funeral parlor, these three stories weave together in a warmly funny ensemble that explores life, death, and the lengths to which survivors will go to hold on. Take it from the New York Times: “It is the playwright Jeffrey Hatcher’s exceedingly successful notion to play upon three unrelated deaths as the means of unmasking three separate lives … reveal(ing), one by one, the essence of a man’s longing, the core of one young woman’s unimaginable anguish and the truth of an older woman’s marriage.” —Jennifer Harlan

It’s literally on like Donkey Kong. The fourth annual Louisville Arcade Expo is this weekend, with over 30,000 square feet of retro video games to play at your heart’s content, and no heavy pockets full of quarters necessary. Hundreds of pinball and arcades machines will be set on free-play, as well as classic consoles like Atari 2600, Commodore 64, NES, ColecoVision and many more. There will also be pinball, arcade and console tournaments with cash prizes, free concerts, and costume contests for those of you dolled up like your favorite sci-fi, anime or video game character. Children 10 and under are free with an adult, and two canned goods or $2 will enter you in a raffle to win a free arcade machine, with proceeds going towards Dare to Care and Kosair Children’s Hospital. Save the princess, she needs you. —Joe Sonka

Karaoke, to me, is a lot like Irish Car Bombs — sometimes you’re in the mood to throw one back, but most of the time, the thought doesn’t even cross your mind to indulge. I’ve got nothing against either, and I do my fair share of both — Car Bombs in March, karaoke when there’s nothing better to do with a Friday night. Lucky for me, it’s both March and a Friday night when the Alzheimer’s Association’s benefit Sip & Sing is set to take over the Highlands Tap Room Grill. The twist to this benefit is this: It’s a $5 donation to sign up to sing a song, but if you’re feeling a little sly, you can sign up a friend, unbeknownst to her; when her name is called, she’ll either have to sing the song you picked or pay another $5 to get out of it. —Sara Havens

Their new album, What Am I Doing Here, was released this week, but the Brooklyn-based twosome Lushes won’t be asking the same question for this in-store. Singer/guitarist/synth player James Ardery (the Darryl Hall of the duo?) grew up here, and continues to co-run our annual Cropped Out festival. Lushes’ post-punk/indie rock/inverted funk has been getting raves from all the right folks, and this in-store performance might be a good chance to see them (Especially surrounded by Fat Rabbit’s vintage clothes and whatnot) before they become as popular as they deserve to be. Boston’s Bad History Month — a funnysad solo version of Fat History Month — also plays, and Flanger Magazine (featuring Chris Bush of Caboladies) opens with some electro-lo vibes. —Peter Berkowitz

Starting at the very beginning of this decade, songwriter and singer/keyboardist Spencer Krug has been using Moonface as the vehicle for his solo material. His first album, Organ Music Not Vibraphone Like I’d Hoped, dropped a year later. Originally from Montreal, Canada, Krug made his mark with various Canadian bands — Wolf Parade, Sunset Rubdown, Fifths of Seven, Swan Lake and Frog Eyes. Krug moved on to Helsinki, where he made Heartbreaking Bravery, a rock document of his state of mind at the time done in collaboration with local band Siinai. He just released his third full-length album, Julia With Blue Jeans On, a piano-driven album that will serve as the focus of tonight’s gathering. —Peter Berkowitz

Brooklyn duo Yvette yields the power of many. Noah Kardos-Fein plays guitar and sings; he also controls sound on several dials and pedals, staying on cue with drummer Dale Eisinger’s heavy kicks. "At this point for me, it’s like second nature," says Kardos-Fein. "There’s only two of us, so we try to do the work of at least three or four people." He explains this while waiting in the doctor’s office, where he will receive a pair of custom earplugs, a testament to their enrapturing style of industrial noise rock. They choreograph the set in notated signals, like mile markers on a strange, distorted trip. "It can definitely be a lot at once, but that’s part of the fun of the live shows," he says. Hip Hatchet and The Debauchees open. —Lara Kinne

‘Displacement: A Reckoning of Internal Affairs’

Displacement — the word is a heartbreaker. Curator Stacey Reason’s two-part art exhibition explores the physical, emotional and psychological changes that define it. One part of the “Displacement” show, subtitled “Of Reckoning,” is at Spalding University’s Huff Gallery. Its co-exhibit, “Of Internal Affairs,” is at the New Harmony Gallery of Contemporary Art in New Harmony, Ind. “I want to consider how place can affect our experience …” Reason states. “Visitors to the first show will have to deal with the anticipation of the second part, and those that only go to New Harmony will be left wondering what has already elapsed. It’s a kind of experiment that I hope will … prompt questions and introspection concerning the topic of displacement.” The Huff Gallery reception is on Friday, March 7 from 6-8 p.m. —Jo Anne Triplett

It seems our dear frenemy the polar vortex, has decided to pay us one last (fingers crossed) visit. And what better way to distract yourself from the fact that we’re all freezing our balls off, yet again, than with an homage to the master of whimsy himself, Mr. Wes Anderson? This charming romp of a party pays homage to all things Wes: musicians and the DJ will cover samples from all seven of the director’s soundtracks, the New Vintage will be decked out from Aquatic to Zissou in Anderson décor, local artist Lindsay Sant will provide live dioramas, and a costume contest will award prizes to the best Sam and Suzy (or the whole Tenenbaum clan, if you’re going for the group gold). Best of all, the whole bash benefits the Fair Event Vendors Alliance, which connects members of the LGBT community with local wedding and event professionals. —Jennifer Harlan

Novelist Paulette Livers has captured a slice of history where much was changing for a Kentucky small town, and for America — and it isn’t difficult to get wrapped up in the many layers that directly reflect on some circumstances of today. The book is “Cementville,” and the author will appear at Carmichael’s for a reading/signing Tuesday evening. The time is the end of the 1960s, and the war in Vietnam has taken a toll on all who live in the titular town. It’s not just the young men whose emotional foundations are lost during combat and insufficiently cared for upon homecoming. Livers shows that, at this time, other vital touchstones of community have been shifting — or, their shift has been accelerating — until the safety and security of many is in jeopardy. —T.E. Lyons

Lex Luthor, Wicked Witch of the West, Dracula — these are villains we know. We may have to include the golf ball now. In their new body of work, Cincinnati artists Chris Reeves and Matt Wiseman have given us their visual interpretations of resistentialism, explained as “the theory that inanimate objects demonstrate hostile behavior toward us.” The art in “Villains!” is serious with a dollop of humor. Reeves’ series of collages are up to the viewer to decipher, while Wiseman’s nemesis is the ball on a hard-to-play golf course. The exhibition will be open during the March 7 First Friday Trolley Hop with a closing reception on Friday, March 28. My resistentialism? The stick shift — still can’t drive with the thing, even after three somewhat patient teachers. It’s pure evil. —Jo Anne Triplett

Talent doesn’t always skip a generation. This month, Garner Narrative features pieces by Kim Richardson and her daughter Isadora Emma Cryer, both based out of St. Louis, MO. Richardson, whose work has been featured at Garner Narrative twice before, describes the enigmatic oil portraits of her series “Hard Kiss in C Minor” as “invitations to journey inward and ponder your own paths or deeper universal truths.” Meanwhile, the collages in “A Mermaid, A Sorcery,” by Cryer, explore the strength and vulnerability of being human. The complementary collections will be on display through March 28th, with a special reception to be held during this weekend’s First Friday Trolley Hop. —April Corbin