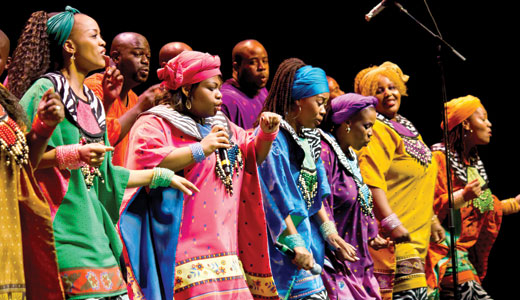 On another sadly cold day in early March, Shimmy Jiyane is in Fayettville, Arkansas. The tenor singer is the choir director of the Soweto Gospel Choir, and the group is in the midst of their fifth North American tour since forming in late 2002. “I’m getting used to it,” he says in his melodic accent, about the below-freezing temperatures. Back home, it usually only gets cold in June and July — “but not like here! Here, it’s crazy,” he laughs.

The group initially formed for a tribute concert held in honor of Nelson Mandela. “He is the man who inspired the choir,” Jiyane says, “so I would definitely say Nelson Mandela kept us going. He taught us to be humble and to forgive and — not to forget, but to be humble.” After shaking the revolutionary leader’s hand, Jiyane says, “I never washed it for, like, five days.”

The Soweto Gospel Choir live show is made up of dozens of singers, musicians and dancers. He says the choir itself has two-dozen members now. “You have to audition first. You stand in a queue, then go in there and give us a good voice, give us some character, be a good dancer — if you’re a good dancer.”

Most stay on full time. Occasionally, every couple years or so, they audition 200 more and pick replacements. “When you’re in the show, you’re here forever,” he laughs. “The people who love the choir love the choir.”

Jiyane doesn’t dismiss a suggestion that “Gospel Choir Idol” might be an idea for a TV program. “I’d get to be a judge! That’s fantastic, yeah.” He says he wouldn’t be a mean judge, but “sometimes people come with high expectations and can be disappointed. It really takes guts. Some are bad, some are the worst, some are good.”

He describes their show this way: “We’re going to be on stage, and it’s going to be fireworks. It is a high-energy show … People can expect beautiful, beautiful South African music.”

The current tour promotes their recent live album, Divine Decade: Celebrating 10 Years. The set includes performances with Ladysmith Black Mambazo, Robert Plant and U2, and an introduction by Archbishop Desmond Tutu. Their first decade has been amazing in many ways — the choir has performed at parties for former President Clinton and Oprah Winfrey, and backed up Peter Gabriel on his Oscar-nominated song from “Wall-E.” They have sung with everyone from Jimmy Cliff to Josh Groban, and toured with Celine Dion and, even more oddly, through Germany with the Red Hot Chili Peppers.

“It’s a very beautiful album,” Jiyane says, sounding more appreciative than boastful. “We did feature many artists from South Africa, from Africa also, from the States, playing. A very nice mixture on the album. We’re celebrating our 10th anniversary in the choir. Celebrating our success, sharing our recordings with our friends on an album — including everything, (the sounds of) our fans and our choir.”

Though they have traveled around the world and made many friends, Jiyane says they are always glad to get on the computers in their bus and Skype with family and friends back home. They come to places like this “… to be here for our fans, to be here for the people.” Though it must be tough to keep track of dozens of people, he says they get time in each city to get out and explore. On stage, they don’t notice when they’re tired because they’re having so much fun. He stays fit “by playing good music!”

So, what’s next for Jiyane and his many friends? “The choir. We’re just looking at doing more music for the people.”

They have won two Grammy awards and been nominated for others. One goal remaining, says Jiyane: “We already performed at the Oscars, so we want to perform at the Grammys. We want people to see our work.”

But mostly, “We want people to get up and dance. We want to see people happy.”