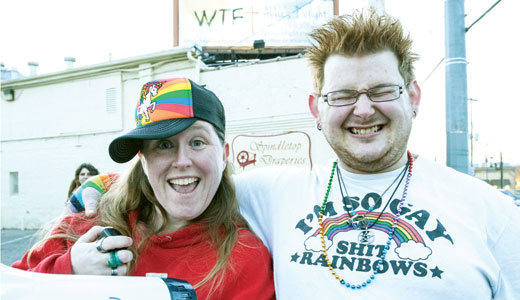 Above the corner of Grinstead and Bardstown in Louisville’s Highlands neighborhood stands a billboard that has surely bewildered many passersby, not to mention angered many who have deciphered its true message.

“Not everyone who is gay is happy. You have options,” reads the billboard, which recently was vandalized with a dissenting reply in large black letters: “WTF.”

The billboard belongs to Abba’s Delight, a local Christian ministry that believes homosexual acts are a sin. The ministry was once an affiliate of Exodus International, a large national organization that led the “ex-gay” movement to “cure” people of being gay. Exodus president Alan Chambers shut down the group last summer, admitting that homosexuality is not a choice and apologizing for the torment they inflicted on so many people who received their brand of “conversion therapy.”

Abba’s Delight director Daniel Mingo claims they don’t try to “cure” people of same-sex attractions, rather “disciplining them to live a life of sexual purity.” In other words, don’t ever have sex, unless it’s with the opposite-gendered spouse that you’re not attracted to.

On Friday, a group of 60 marched to the sign for a protest rally, incensed that such a hateful message was placed in a heavily LGBT-populated neighborhood that is a short walk from three gay bars. Down the street at one of those establishments, Big Bar, the protesters gathered for the march, with the stereo playing ABBA songs. (“Abba” is the Hebrew word for “father,” as the ministry wasn’t named after the ’70s Swedish pop group with a large gay following.)

The protest was organized by Zanne Koehne, a mentor of LGBT youth at the Louisville Youth Group who is trying to get the owner of the billboard space, CBS Outdoor, to take the billboard down. While Koehne says people are split on that specific action, the protest was about showing “a physical manifestation of the solidarity of our gay community.”

“In my opinion, that sign doesn’t need to be up,” Koehne told LEO. “But half of the community here thinks it should be up, because of their First Amendment right to express yourself. Half of the community thinks it should come down because of the horrible views it portrays. But what we all agree on at the end of the day is that the message is wrong.”

Koehne said she could understand why a person would want to vandalize the billboard, but the march and rally was a more constructive way to stand up against Abba’s Delight and support the LGBT community.

“Many people want to deface the billboard, but we want to take a healthier approach, where we express our opinion positively,” said Koehne. “Defacing it doesn’t help anyone in the long run.”

The group walked a few blocks down Bardstown Road from Big Bar to the billboard, chanting, “We’re gay and we’re happy!” Crossing Grinstead Drive, a man stopped at a red light shouted out supportively, “I’ll pull that damn sign down for you!”

More than 20 people spoke through a megaphone to the crowd gathered in the parking lot below the billboard, blasting Abba’s Delight’s conclusion that there is something inherently wrong with LGBT people that needs to be fixed, and that such views are the actual root of why so many gay people are not, in fact, “happy.”

Elizabeth Stith — the new director of Louisville Youth Group, which has served more than a thousand LGBT young people facing an unsafe home or school environment in its 23 years of operation — says signs such as this only make her work harder.

“Believe me, they’ve seen it and they’re talking about it,” said Stith. “And I hope they don’t ever have to see something like this again.”

Melissa Love spoke of the high suicide rate among LGBT adolescents, adding that she lives in a state where she still cannot marry the woman she loves.

“Signs like this make homosexuals feel like it’s a disease, it’s a deficit,” said Love. “It’s not. It’s not an illness, it’s not a disease. It’s, like, I have green eyes, and I’m gay.”

Love’s fiancée, Erin Brock, said she hoped the two young boys they are raising will not grow up to see a world where people are confronted with such a belittling message. “When they are older, I want them to look back and just see this as a part of history,” said Brock. “I don’t want them to have to fight anymore. I want the fight to be over, because everything will just be equal.”

Other speakers mentioned the horrors of intolerance they had to deal with in their lives: a closeted brother committing suicide; a forced exorcism at 14 years old to expel the gay “demon” inside her; a career in the Air Force spent hiding in order to avoid expulsion; and parents kicking them out of the house once they decided to come out.

The last speaker was a young man who just came out three weeks ago, thanking the crowd for the show of support in the face of messages like that of Abba’s Delight.

“All of these people are here for you!” was shouted from the crowd. “We’ve all got your back!”

Chris Hartman, director of the Fairness Campaign, tells LEO the decision of Abba’s Delight to put the billboard in such close proximity to three gay bars “hints of a particular degenerate desperation.” Hartman cited a recent study showing that 85 percent of those who have been through “ex-gay” ministries such as Abba’s say the harm inflicted on them still affects them to this day, and such “therapy” has been denounced by the American Psychological Association.

“No business I know that sells increased depression and suicide rates among its participants and leaves many with PTSD experiences is successful,” says Hartman, who notes that the ministry has no licensed therapists. “Abba’s Delight and programs like it are a straight-up sham — don’t buy the snake oil.”

In an article in LEO last summer on Abba’s Delight and ex-gay therapy, Benjamin Berry of Louisville told his horror story of being literally tortured by a therapist recommended to him by a priest after he first called Exodus for help as a child. Berry fell into alcohol abuse and attempted suicide three times before fully accepting his sexual orientation — happily — in 2010. He says the gentler rebranding of Abba’s Delight doesn’t hide that the message of the ex-gay movement remains in place.

“Both still give the message that LGBT people are in some way flawed or sinful for being who they are,” said Berry. “Both approaches make one feel less than and foster a sense of depression and frustration that all too often leads to despair and self-harm.”

Mingo of Abba’s Delight — who characterizes their service as a “Christ-like expression of love” — told LEO soon after the billboard went up that its proximity to an LGBT population and gay bars was simply a coincidence based on availability and not intentional.

However, in a recent WHAS story on the controversy, Mingo directly contradicted himself, saying the billboard’s location was specifically chosen “because it’s a heavily gay populated area.”

The landscape of LGBT rights in Kentucky is currently shifting in dramatic fashion. Last month, U.S. District Court Judge John Heyburn made a landmark ruling that Kentucky’s 2004 constitutional amendment banning the recognition of same-sex marriages performed in other states is an unconstitutional violation of the equal protection clause. The ruling, in which he describes the ban as treating “gay and lesbian persons differently in a way that demeans them,” was made final last week. Heyburn granted a 21-day stay until Kentucky must decide whether to implement the new rules, or opt to appeal the ruling.

On Tuesday morning, Kentucky Attorney General Jack Conway made his final decision in an emotional statement, saying Heyburn made the correct ruling and he will not waste taxpayer dollars by appealing.

“I came to the inescapable conclusion that, if (appealed), I would be defending discrimination,” said Conway. “That I will not do. As Attorney General of Kentucky, I must draw the line when it comes to discrimination.”

Choking back tears at the end of his statement, Conway added, “In the final analysis, I had to make a decision I could be proud of — for me now, and my daughters’ judgment in the future.”

However, moments after Conway’s statement, Gov. Steve Beshear gave LGBT rights supporters whiplash, saying he will hire outside counsel to appeal the ruling. Heyburn is expected to allow a stay through the duration of Beshear’s appeal, which could be ruled on as early as this summer, or drag on throughout next year.

Judge Heyburn is also considering another part of the lawsuit that seeks to strike down the ban in full, which would allow same-sex couples to be married within the state. Though a recent poll showed that most Kentuckians still oppose gay marriage, that opposition has decreased drastically in recent years, and a plurality of Democrats support marriage equality.

Despite polls showing that a large majority of Kentuckians favor a statewide LGBT fairness law that would outlaw discrimination in employment, housing and public accommodations based on sexual orientation and gender identity — and a growing number of cities have implemented such a law — HB 171 of Rep. Mary Lou Marzian, D-Louisville, has faced difficulty gaining traction. However, just after the decisions by Conway and Beshear on Tuesday, the Fairness Campaign announced the bill would get its first ever hearing in the House Judiciary committee on Wednesday.

At Friday’s rally in the Highlands, speaker Alan Canon said that while LGBT rights in Kentucky may not be where he wants them, there is reason for optimism that “the day when gays and lesbians marry in churches from Pikeville to Paducah” is nearly at hand. “Let’s not lose sight of the present, while harmful policies and bigoted beliefs still sully the human landscape,” said Canon. “We have a lot of good reason for hope for our side, hope for a future free of anti-queer discrimination. It’s up to us to bring that future about.”