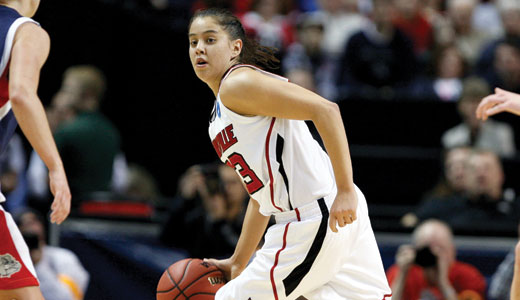 Every few years or so, if a team is lucky, they will land a one-of-a-kind player. One whose presence is felt immediately and often. Their game is quick, smart and well-rounded. Not only do they shine, but they also know how to set their teammates up for smart plays. Once their college career is over, they leave a gaping hole that’s hard to fill, but their legacy lives on in unforgettable highlights, personal and team accolades, and hanging in the rafters of their home arena. Shoni Schimmel is one of those players.

When Schimmel came to the University of Louisville in 2010, she already had quite the following. As a member of the Confederated Tribes of the Umatilla Indian Reservation, she was a rock star among the Native American community before she even turned 18. Schimmel and her sister Jude, who is a junior guard for the Cardinals, have attracted hordes of Native American fans from as far away as Alaska to come watch them play in person. Schimmel validated her popularity once she set foot inside the KFC Yum! Center, earning the starting point guard position as a freshman, and starting in all 35 games.

Now, as a senior leader on a team that is defending national runners-up and ranked third in the country, she has achieved pretty much everything a college athlete could dream of: being the face of a successful program, becoming just the fifth player and second woman in school history to notch more than 2,000 points, and having one of the most epic highlights in the biggest upset in the history of her sport’s tournament.

However, there is one thing she hasn’t achieved. While she may have made a wild shot over the all-time leading shot blocker when the Cardinals shocked Baylor in the 2013 NCAA tournament, Schimmel has never tasted victory against the team that is the Mecca of women’s college basketball: the Connecticut Huskies. While she’s averaging 16.9 points per game, UConn held her to just nine points in Louisville’s two losses to the Huskies during the regular season. She was able to score 20 points when they faced UConn for a third time in the AAC championship on March 10, but the Cards still fell 72-52. The likes of Breanna Stewart and Kaleena Mosqueda-Lewis are Schimmel’s kryptonite, but she may get one more chance to take the Huskies down in the NCAA tournament.

If U of L has a shot at upsetting UConn, they’re going to have to rely on big nights from players other than Schimmel, because the UConn defense can and will shut down her shooting. She made just one-of-six shots from beyond the arc in U of L’s senior day loss, and went just one-of-five when they played at UConn on Feb. 9. Even though she managed to score double digits in the AAC tournament loss, she still had a rough shooting night, making only seven of her 25 attempted shots.

People say Connecticut is in a different league than the rest of women’s basketball, and that they’re unbeatable. The mighty have fallen at the hands of the Cardinals before, and with three games against UConn under their belts, Schimmel and company might be the best-equipped team to pull off the upset of all upsets.