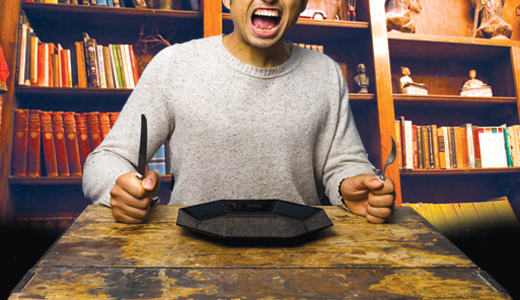 A customer service specialist at an established Highlands restaurant has been let go after three months for failing to understand one of the latest food trends in the industry: slow food.

Management issued a public apology and assured customers that new training policies were being put into place. “We would have severed ties with the employee sooner, but we weren’t aware of the issue,” admits general manger Louis Greer. “Apparently, once the customers asked about the wait, Melissa would ask them, ‘You ordered from the slow-food menu, didn’t you?’ The customers didn’t really know what it means, either. Going forward, we’re going to do a better job of explaining things.”

Greer says he was finally tipped off to the issue by a bad Yelp review. “Someone calling themselves Anthony Forshame commented, saying he’d waited 45 minutes for his enchiladas, and during that time he’d googled ‘slow food’ on his iPhone.”

The reason Forshame did not comment on the problem in person is unknown.

The slow food movement refers to a mindset of preserving local and regional cuisine and using local products. It has nothing to do with extended wait times or snails and other slow-moving animals people might be interested in eating. It should not be confused with the no-food movement, which involves visiting a hip restaurant and only ordering lemon water in an effort to send a message about sustainable food practices, or the flow-food revolution, which advocates for better soup options.

Asked what she will be doing going forward, Jones shrugged. “All the attention this has gotten makes me think maybe I should open my own place. Maybe I’ll start with a food truck. I could call it Slow Your Roll.”