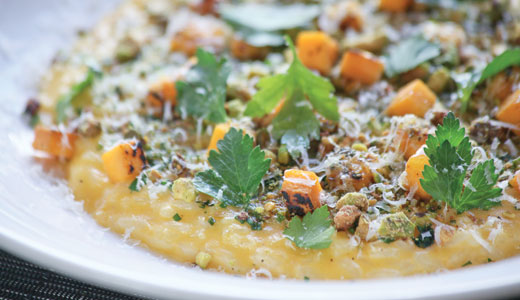 What the Flock?! No, that’s not a question. It’s a title, the moniker artist Johnston Foster bestowed on the “site-specific installation” (you or I might call it a “sculpture show”) that, since 2012, has filled the overhead space in Proof on Main with a squadron of exploding seagulls.

Let’s face it, Proof on Main is that kind of place. It’s housed in the trendy confines of Louisville’s much applauded 21c Museum Hotel, which includes the word “museum” in its name with good reason: The place is loaded with wacky yet meaningful art that incorporates everything from its signature red penguins to the giant golden replica of Michelangelo’s “David” out front to, well, exploding gulls.

Proof has been a hit since its arrival in 2006, although I was never quite persuaded by its odd mix of yupped-up “Southern” fare with trendy “Tuscan” — cuisines so disparate that they went together, for me, like WD-40 and water.

But since Chef Levon Wallace arrived in 2012 (around the same time the exploding gulls landed, which is probably just a coincidence), that odd blend of accents seems muted, giving way to a more internationally inspired bill of fare that plays creative riffs on mostly locavore meat, produce and poultry.

Indeed, quite a few of the kitchen’s needs are supplied within the corporate family of Steve Wilson and Laura Lee Brown, who founded 21c and also run Woodland Farm and Kentucky Bison Co. in nearby Oldham County. The noble buffalo, indeed, turns up in three of the 16 appetizers and entrees, including a bison carpaccio ($11), a bison burger ($17) and a bison steak ($34) billed as “NY Bison” on the menu, which I take to be a state-name typo. It does come with “local roots,” whereupon the jokes just write themselves.

Main-dish prices top out at $29 for the “Kentucky cassoulet,” perhaps the menu’s nearest remaining approach to hillbilly cuisine, which, possibly for the first time ever, brings together Kentucky rabbit sausage and foie gras on the same plate, along with sides of black-eyed peas, collards and cornbread.

Proof’s bar is a destination in itself and a certified stop on the Urban Bourbon Trail, so you’ll have no difficulty filling your adult-beverage needs, whether you fancy an interesting wine, an artisanal beer, a world tour of liquor beyond bourbon or, keeping up with the trends, creative cocktails. I couldn’t resist the “Late For Work” ($10), lured by the call of Cynar, the Italian artichoke liqueur, in a tall, not-too-sweet blend of grapefruit and lemon juices with simple syrup and ginger ale.

Our party of eight started with a couple “for the table” apps, portioned for sharing. Charred octopus ($15), a trademark dish since Proof’s opening, proved a great intro to those in our group who’d never met the tasty cephalopod on their plate before. Marinated in oil and lemon and charred until toothsome, not rubbery, it tasted subtly of the sea. Another app, warm ricotta, sounds about as intriguing as “milk toast” but tasted great: rich white cheese warmed to gently loft the sensuous aromatics of truffle oil.

Cauliflower soup ($8) might sound a bit pedestrian, too, but not on Chef Wallace’s watch: A rich, creamy cauliflower puree was brightly decorated for the eyes and palate with finely pureed kale, bits of tangy blood orange and flakes of earthy granola, ready to mix into a cheering starter.

An oversize “hog chop” from the Wilson-Brown Woodland Farm began with a sizable, lightly smoked slab of firm-fleshed, free-range pig meat big enough for two. It perched on a bed of tender, aromatic house-made rye-flour spaetzle and was garnished with crisp Granny Smith apple matchsticks, cooked cabbage, smoked onion and a pool of seeded mustard — a flavor symphony that unfortunately resounded more of Spike Jones than Toscanini.

I’m not singling Wallace out for calumny here; this over-the-top approach is all too common in today’s fancy dining, flavor piled on flavor until nothing stands out and it all mashes into a clanging culinary chord. The rest of the pork, brought home in a box, washed off and reheated the next day, was a far better thing au naturel.

Acorn squash risotto ($19) was well-made if almost too rich, with the natural creamy nature of Arborio rice enhanced by distinctly funky Taleggio cheese and, unless I miss my guess, a good dollop of dairy cream as well. Crunchy chopped pistachios and tiny winter-squash dice added textural contrast, and I thought I detected a whiff of anise liquor that didn’t really play in tune.

“For the table” sides were variable. Braised farm greens ($7) were sweet, but not in an appetizing way. Kentucky Weisenberger grits with Indiana Capriole goat cheese were smooth, rich and fine.

Our share of dinner for two, including cocktails and two of the “for the table” apps, came within a boardinghouse reach of $100, and management added an 18 percent tip for our larger group; I tossed in another $5 to nudge it past the socially acceptable 20-percent level.