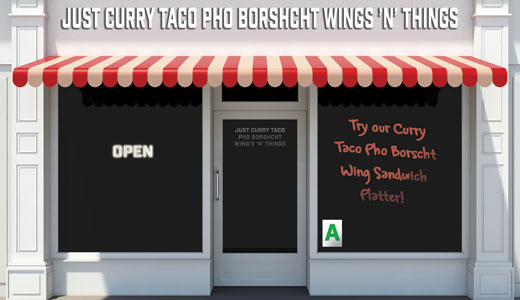 A new restaurant, Just Curry Taco Pho Borshcht Wings ’n’ Things, has opened in NuLu. The concept is the brainchild of co-owners Mary Srivastava Garcia-Nguyen and Russ Dementyev-Johnson. “We’re so excited to finally bring our curry, tacos, pho, borscht and wings to Louisville,” said Garcia-Nguyen. “All of our food is organic and locally sourced.” The restaurant offers an a la carte menu, as well as some unusual items like refried curry wings and beet taco pho.

The owners hope to appeal to Louisville’s “foodie” demographic. “People are always looking for new ways to experience world cuisines,” said Dementyev-Johnson. “To newbies, it might look like we just got some buckets and went around to the dumpsters behind Louisville’s restaurants and dumped stuff into the bowls, but there’s actually a method to our madness. OK, well, we did get our food from dumpsters, but there’s definitely a method: We dive only in local dumpsters behind restaurants that serve organic food.”

Garcia-Nguyen, who formerly worked at Ditto’s and August Moon, developed the menu. “For years, people would tell me they might be eating curry and suddenly be hungry for tacos,” she said. “Others would be in the middle of a bowl of pho and get a hankering for buffalo wings. Boy, when I say it out loud, it really makes me hope the legal-marijuana trend reaches Kentucky soon.”