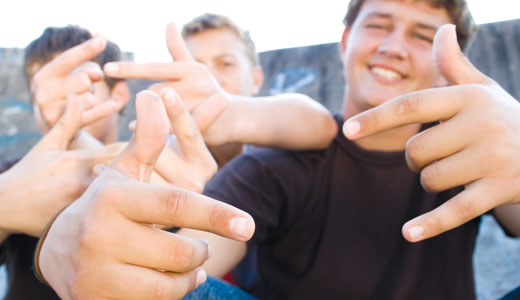 Future hipsters Iver Samson, Lennon Pinson and Holden Suffeld, who will one day comprise the indie-folk-newgrass-punk-new-age band 21st Century Hobo, are doing well in their seventh-grade music class, according to teacher Cindy Flanagan.

“I really think Iver is doing quite well on the trumpet, despite his limited musical abilities,” Flanagan said, unaware that her semi-talented student will in just eight short years be embarking on a seven-month tour of the U.K., Spain, Australia, the Netherlands and select cities in the U.S. “I believe I’ll be giving him a solid B for this semester.”

Pinson, she said, is “really doing well on the timpani and seems to have a reasonable sense of rhythm, especially for a boy his age. But I wish he wouldn’t spend so much time talking to the girls in the third row.”

She said young Pinson will definitely get a passing grade, assuming he pays attention with more consistency through the end of the school year. She did not comment on the fact that Pinson will, in less than a decade, be wearing wool hats at summer rock festivals while playing drums in front of thousands of drunk, screaming assholes.

It is Suffeld, however, who stands out most in her fourth-period classroom.

“Holden is my star pupil,” Flanagan gushed. “He is proficient at classical guitar but has shown aptitude with a number of stringed instruments, and he has a certain smoky appeal that will serve him well if he ever decides to go into music as a profession.”

Flanagan, who is destined to pose for countless band photos with his mouth half open while wearing thick scarves, told reporters he is beginning to write songs and record crude demos on an old four-track recorder his father used back in the 1990s.

His goal by the end of the school year is to continue to develop his facial hair and have a first draft of a concept EP about romantic irony titled Inaudible Scream. In addition, he is already considering replacing Pinson with that guy from Blood Orange.

My Morning Jacket’s surprise new album
Following in the footsteps of Skrillex, Beyoncé and Justin Timberlake, psychedelic alt-country R&B funk kings My Morning Jacket released their new album, Small Wonderz, yesterday without any advance notice. The album was made available at local Homemade Ice Cream & Pie Kitchens, and was only sold to fans who could correctly identify drummer Patrick Hallahan’s favorite Billy Ocean song (“Get Outta My Dreams, Get Into My Car”). Band manager Corky Sherwood said, “It’s so hard to stand out in today’s oversaturated media marketplace — everyone is forced to go to extreme measures these days to publicize a new release. Otherwise, we’re competing for attention against 40 other records every week, ‘House of Cards,’ Matthew McConaughey, Flappy Birds, Mitch McConnell and every ‘What does the cast of ‘Night Court’ look like today?’ linkbait.” The album was recorded over six months, cost $75,000 to make and will be listened to halfway through by the band’s most devoted fans, before those fans get distracted by a Vulture essay about Lena Dunham’s hips.

Concertgoer shocked when concert sells out in advance
Gertrude Kaikai, 23, was “shocked” when she arrived at popular nightclub Zanzabar last Friday at 10:24 p.m. and discovered the headlining band she had been excited to see, Muff Liver, had sold out their show two months earlier. “But … but … I don’t understand why this happened and I can’t just get whatever I want whenever I think I deserve it! I feel entitled to just expect things to be handed to me. I literally do not understand consequences!” Because she had seen people discussing the show on social media, Kaikai assumed it would sell well and be a “cool” place to be seen at. However, she did not realize other people would also buy tickets, because she thinks the world revolves around her, and that everyone else disappears when she can’t see them. “This would never happen in Portland or Austin!” she was heard ranting outside.

When a friend later asked if she had bought tickets to an upcoming one-night-only pop-up dinner at local restaurant Rye, Kaikai replied, “No, I’ll just show up. What are the odds that something would sell out ever again before I get there?”

*These stories are part of LEO Weekly’s Fake Issue.