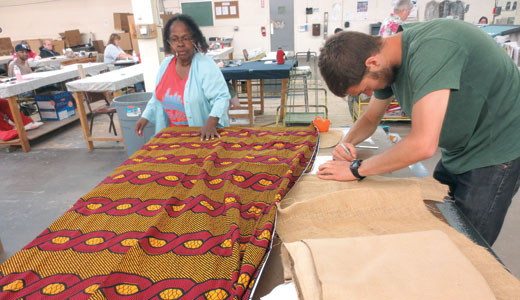 Jack DuFour works on a tote.

Louisvillian Jack DuFour went to Uganda because he wanted to help people. It was 2012. He and girlfriend Alley Heffern, both engineering students at Virginia Tech at the time, joined Engineers Without Borders and went on a service trip to the African country, where they worked on solar panels at an orphanage and a rural school. On the 17-hour flight back to the United States, they thought about how fulfilling their time there had been and wondered how they might be able to continue giving to the people there, even from afar.

The couple had with them “Start Something That Matters,” a book written by Blake Mycoskie, the founder and self-described chief shoe-giver behind TOMS. They’d both read the call-to-action book before, but this time was different.

Inspired by the bright, busy patterns of the textiles they’d seen all around Uganda, they decided they’d create their own backpacks. They spent the next year researching sustainable business models and getting a crash course in the art and design of handmade textiles. “We were engineering students, so we were meticulous,” DuFour recalls. “I remember going in and measuring stuff out with precise angles. (The people teaching us) just laughed. They all measured things by hand. There was a bit of a learning curve for us. We had to forget some of the stuff we learned.”

Last summer, with a lot of legwork and a little crowd sourcing via indiegogo.com, they launched Taaluma Totes. (“Taaluma” in Swahili means “culture.”) The idea is relatively simple. The duo collects fabric unique to a specific country. A Virginia nonprofit that hires people with disabilities creates the bags using the fabric and repurposed burlap sacks from a nearby coffee shop. The bags are sold. A chunk of the proceeds are used to provide microloans to low-income individuals who have little to no access to typical banking services. When those microloans are paid off, the money is poured back into their local community to fund other entrepreneurs in need.

Since launching in August of 2013, Taaluma Totes has sold their vibrant, durable bags through their website and booths at retail events like the Flea Off Market. So far, they’ve funded 85 microloans in four countries — Uganda, Ghana, Indonesia and Kenya. Their first recipient was a Balinese man who used his $250 to invest in the wood and paints he needed to make sculptures and masks, which he sells. He’s already paid 80 percent of the loan back. A Kenyan woman invested her $1,050 microloan into her farm so she could produce more, creating a rippling effect within her community.

What it boils down to is a giveback model that equips people with the tools and resources to help themselves in the positive endeavors they are already taking, says DuFour. “It’s the same philosophy of teaching a man how to fish.”

Earlier this year, DuFour and Heffern loaded up their personal Taaluma Totes and headed to Thailand, where they are exploring and sourcing new fabrics from around Southeast Asia. Their goal for the year is to expand the number of countries their fabrics are sourced from and support. They’d also like to explore whether they could get their products into some physical retail stores.

“This started out as a small project,” says DuFour. “Of course, we had high hopes, but I really couldn’t be happier.”

Big-time philanthropists like Bill and Melinda Gates have praised microfinancing as a tremendous tool for empowering impoverished countries. According to World Bank, nearly one-quarter of the global population lives off $1.25 or less per day. For these individuals, as well as for scores of others living above the global poverty line, traditional banking and lending opportunities don’t exist.

Microlenders provide this service under the belief that people, if given the resources, will pull themselves out of poverty. According to the Foundation for International Community Assistance, the weekly income of their microloan receivers increased on average 145 percent. A separate microlender, Bank Rakyat Indonesia, reported that the average income of their borrowers increased by 112 percent and that 90 percent had graduated out of poverty.

Kiva, the best-known nonprofit microlender based in the United States, has distributed more than $500 million in 73 countries since it was founded in San Francisco in 2005. They report a repayment rate of almost 99 percent. Taaluma Totes, along with countless other startup businesses, nonprofits and charitable groups, operates their microloans through Kiva.

Microloans are not a silver bullet against poverty. They cannot do much for communities dealing with epidemics of terminal illnesses, and some have criticized such loans for having high interest rates. Still, it can make a difference by connecting people on what feels like a person-to-person interaction and taking away the feeling that you’re throwing away money at a global issue too large to eradicate. Many microfinance groups specifically target women as a tool of individual empowerment and because studies show they are more likely to invest in their children and families, thereby combating generational poverty.

While microloans go furthest in places where the dollar goes furthest, the practice isn’t limited to impoverished communities in locales you only see on the news.

Alongside their bread-and-butter microfinancing, Kiva operates Kiva Zip, which facilitates crowd-sourced peer-to-peer loans with 0 percent interest for entrepreneurs in the United States and Kenya. One local beneficiary, Groce Family Farm, recently received $4,400 through the service, which they used to buy a tractor and piglets to help grow their farm. The farm has just entered the payback phase.

Last month, nine Louisville microbusinesses (defined as having five or fewer employees) were given a combined total of $90,000 by the Metro Department of Community Services and Revitalization. Paid for by federal funds through a Housing and Urban Development grant, the money is designed to help these businesses expand and create new jobs.

Recipients included Yomi and Funmi Aderinokun, the owners of the West African restaurant Funmi’s Café on Bardstown Road, who plan to use their $10,000 to add more seating, expand into beer and wine sales and add two full-time positions. Another recipient, Desmond Conley, received a $6,100 loan to purchase additional equipment for his remodeling and carpentry company, G.I.D. Remodeling.

Independent of these awards, the department of Community Services and Revitalization operates two microlending programs, one for businesses that have been open at least a year and another for promising startups.

Navigate Enterprise Center, a subsidiary of Jewish Family & Career Services, has operated a local microlending program since 1995. In the last year alone, they’ve helped finance 20 businesses and assisted more than 30 through classes and other resources. Many of their clients are refugees or immigrants who haven’t had the financial history to qualify for commercial banking outlets. Their success list includes local restaurants, clothing stores and owner-operated truck drivers.

One market research company, TechNavio, forecasts the global microfinance industry to grow 16.61 percent between 2012 and 2016.