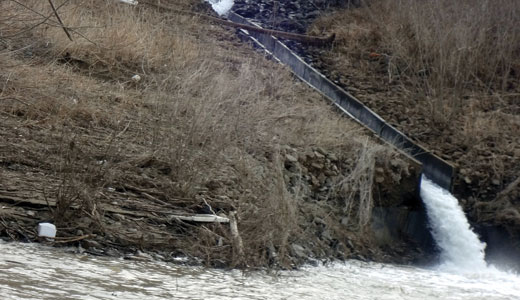 Since last March, a time-lapse camera across the Ohio River from Louisville Gas & Electric’s Mill Creek power plant has captured a nearly constant flow of wastewater flowing into the river from the edge of the plant’s coal ash pond.

Citing footage from this camera — installed by local Sierra Club organizer Thomas Pearce — environmental groups Earthjustice and the Sierra Club announced their notice of intent to sue LG&E on Monday for violating the federal Clean Water Act and the terms of their state permit, which allows only an “occasional discharge” of coal ash wastewater into the river.

Based on additional photos from Google Earth, the environmental groups contend that these violations have occurred since at least 2009, suggesting in their notice of intent that civil penalties could amount to as high as $68 million. According to LG&E’s 2007 permit application, these discharges from the coal ash pond — containing byproducts from the burning of coal — have significant levels of toxic pollutants such as arsenic, mercury, selenium, lead and cadmium.

Asked for a response to these charges, LG&E spokeswoman Chris Whelan said in an email that “We have not received a formal notice of intent and we will not comment on potential litigation.”

While LG&E isn’t commenting, the Beshear administration is denying the utility company has broken any rules at all. In a statement provided to LEO, R. Bruce Scott, the commissioner of the Department for Environmental Protection — which is under the state’s Energy and Environment Cabinet and oversees the Kentucky Division of Water — says that the constant discharge into the Ohio River is allowed under LG&E’s state permit.

Scott says that while the permit refers to an “occasional” discharge, “the permit effluent requirements do not restrict the frequency of the discharge. Consequently, there is no violation of the permit for frequency of discharge from outfall 002 as alleged in the NOI. The flow volume is monitored in accordance with the permit.” Scott also contends that the Division of Water monitors pollutants within the discharge, which are also in compliance with the permit. He has not yet responded to LEO’s inquiry on how often such discharges are monitored or tested.

Earthjustice attorney Thom Cmar tells LEO that this interpretation of “occasional” in the permit as meaning “whenever they feel like it” is absurd, saying, “The state can’t rewrite this permit in the press.”

“The law clearly prevents regular toxic mercury discharges into our water, and LG&E’s own permit states that discharges may only be occasional,” says Cmar. “We’ve documented a year’s worth of constant coal ash wastewater dumping — far more than ‘occasional.’ The evidence shows that LG&E is in blatant violation of existing standards, threatening the health of Kentucky families.”

In the background of this looming legal battle is the national discussion of the public health danger posed by coal ash, and the question of what governmental bodies should regulate it.

LG&E’s Cane Run plant has been levied with small fines over the past few years by the Metro Air Pollution Control District for its inability to prevent fly ash from blowing off its property into the adjacent neighborhood. A 2009 report by Kentucky environmental groups showed that unlined coal ash ponds are leaking into groundwater all over the state, with several deemed “high hazard” by the EPA — including Mill Creek and Cane Run — meaning that a breach of the pond dam could lead to fatalities or catastrophic environmental damage.

This is exactly what happened in North Carolina in February, as a retired Duke Energy coal plant spilled nearly 82,000 tons of coal ash and 27 million gallons of wastewater into the Dan River.

Currently, regulation of coal ash impoundments is left up to the states. However, the Sierra Club is one of 12 environmental groups suing the EPA in order to force them to finalize rules on whether they will regulate this material at the federal level.

“It’s devastating to think that (the Mill Creek discharge) could have been going on for more than 20 years,” says Pearce, noting that Google Earth images dating back to 1993 show a similar discharge. “It’s like the North Carolina or West Virginia spills, but in slow motion, with no one to stop it.”

Democratic state Rep. Joni Jenkins of Shively — in close proximity to both the Mill Creek and Cane Run plant — has been a dedicated advocate of increasing government regulation of coal ash. In a 2012 EPA hearing in Frankfort, she was the lone Kentucky office holder to give a statement not bashing the EPA, but imploring it to get more involved. Jenkins tells LEO she wasn’t shocked to learn of the Mill Creek discharge, nor the state’s shrugging of its shoulders to the discovery.

“I think we felt that was happening,” says Jenkins. “And I hope that knowledge goes throughout our community, because I’ve been saying for years, there’s not ‘our water in the southwest’ and ‘everybody else’s water.’ It’s all of our water. And I think the whole community should be concerned.”

Jenkins currently is sponsoring a bill in the General Assembly to increase the monitoring of coal ash and improve emergency disaster plans for coal ash ponds. Environmental regulation departments in state government have been dramatically slashed over the past decade, and environmental groups have fiercely criticized their ability and willingness to protect Kentucky’s water from the pollution of the coal industry, which remains a politically powerful force in Frankfort.

“It’s just like pushing rocks up a hill in Frankfort,” says Jenkins.