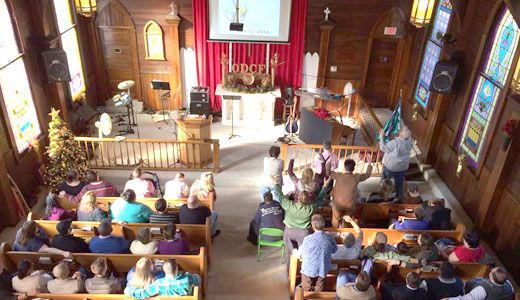 Michael Booth married a woman because he was supposed to. Raised in an ultra-conservative religion where women didn’t wear pants or jewelry, he’d been taught since birth that homosexuality was a perversion and a sin of the worst kind. Ministers told him that marriage would be a cure-all for these temptations.

It wasn’t, of course. Five years into his traditional marriage, he was as repressed and depressed as ever. He was 25 years old and contemplating suicide.

From there, it was a journey of self-discovery and scripture. “When you’re so used to beating yourself up, it’s really hard to take a step back and reevaluate things,” he says. “‘Gay Christian’ still seems to be such a new term.”

He studied the cultural and historical context of the biblical passages in question. Last year, he was selected as one of two Kentuckians to participate in The Reformation Project, a nonprofit started by Vine that hopes to reform church teaching on sexual orientation and gender identity.

Now, at 27, Booth is an openly gay and devout Christian. He still attends a conservative church and, although the reception from fellow parishioners can be fraught with nerves at first, he has never been turned away or outwardly condemned. He believes many people hate out of ignorance more than anything else.

“I know it’s surprising,” he says about his decision to stay with a church that isn’t outwardly supportive of his sexual orientation. “Honestly, I wanted to go to a church that supports me for who I am, but I am very determined to follow God’s will. I’ve prayed about this, and this is where God wants us to be.”

Religion is sometimes pegged as the bad guy. Arizona came under fire earlier this year for passing SB1062, an ambiguously phrased “religious freedom” bill viewed by many as designed to protect and legitimize businesses that discriminate against members of the LGBT community. Only after business leaders expressed concerns that the bill might have a negative fiscal impact — including the possibility the NFL would move the 2015 Super Bowl currently scheduled in Glendale, Ariz. — did Gov. Jan Brewer veto the bill.

Similar or related legislation is bouncing around the state level in Georgia, Idaho, Mississippi, Missouri, Ohio and Oregon. All use phrasing about protecting religious rights. All seem to be in stark contrast to general polls, which show that acceptance for same-sex marriage and the LGBT community as a whole is growing, especially among the younger generations. The latest Pew Research poll shows that a majority of Americans (54 percent) support same-sex marriage, while 39 percent oppose it.

For religious practitioners who embrace more progressive policies, seeing others interpret the faith in such a negative way can be frustrating.

“It’s hard to put into words,” says Pastor Sherry Roby of Open Door Fellowship on Southern Parkway. “It’s so hurtful. I believe these people who are trying to push legislation this way think they’re doing the right thing, but they’re not thinking about other people. They’re only looking at the world they know.”

Roby sees the other side. Her congregation is predominantly gay, though not exclusively so. Many members, including her, were driven away from their former churches because of their sexual orientation. Others chose to leave because they wanted to be a part of a congregation that supports same-sex rights.

At a press conference earlier this month announcing the filing of an Indiana lawsuit challenging same-sex couples’ inability to get married, two of the four couples brought up the idea of religious freedom and criticized the notion that discrimination is any part of it.

“That’s not religious freedom,” said Michael Drury, who left the Catholic church he was raised in because of its attitude toward gays. He now attends the St. Mark’s United Church of Christ in New Albany, where he says the ministers would love to legally marry him to his partner, if only they could.

“Nobody is telling ministers they have to officiate a wedding they don’t want to,” says the Rev. Dawn Cooley. “Churches and congregations have been choosing who they will marry and who they won’t for ages. Marriage equality wouldn’t change that.”

Cooley remembers the hurdles she faced with her interfaith marriage way before the same-sex marriage debate began. Her fiancé’s Catholic church wouldn’t marry them because she wouldn’t convert. Her fundamentalist church wouldn’t marry them because they were already living together. They ended up marrying at a Methodist church because it would allow them to. Later, she discovered the progressive Unitarian Universalist church, where she has stayed ever since.

“On the one hand, that’s what it means to have religious freedom. I can’t force my belief on someone else,” says Cooley, “but what’s happening now is that my ability to unite a same-sex couple is being infringed upon because these couples don’t have the same civil protections.”

In an effort to highlight the difference between civil and religious marriage — two things that often get blurred together because religious practitioners are given the ability to sign civil documents — the First Unitarian Church in Old Louisville took a proactive stand. In 2011, its congregation asked the Rev. Cooley to decline to sign Kentucky marriage licenses until the state allowed same-sex marriages. The decision came on the heels of other like-minded ministers and churches making the same decision as a showing of activism against the state constitutional ban against same-sex marriage.

Since then, Cooley has participated only as a religious officiant to couples of whatever gender makeup. Far from resulting in a decrease in the numbers of weddings she attends, members and non-members of her church have embraced the policy. A number of heterosexual couples have even sought her out because of the position.

Rabbi Robert Slosberg of congregation Adath Jeshurun in the Highlands recently traveled to Maryland to perform a civil marriage ceremony for one of his members. A spiritual ceremony was then held here in Kentucky. It was the first one held in the synagogue’s newly renovated facilities. “There wasn’t a peep over it,” he says. “We just don’t think like that here. The only issue is that two lovely people were getting married.”

Slosberg says it may also be the first same-sex ceremony ever, though the institution has long had an open-door policy. Scripture that speaks of “forbidden relationships” are intentionally skipped over because it’s not in line with being a loving, accepting and safe place for worshippers.

“I think there’s a seismic change going on,” he adds. “Today there’s probably not a family out there that does not have a gay or lesbian member. People are more comfortable with who they are. As these things change, people over time will become more accepting of it.”