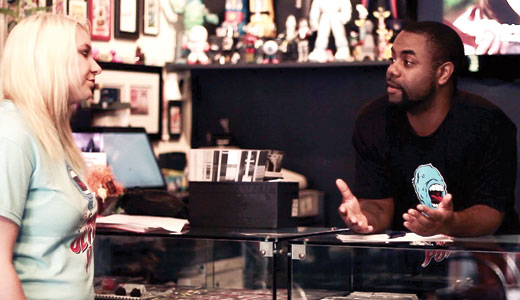 “Good Luck With That” plays like a Miramax movie from the early 1990s; it curses as much as “Clerks” but is far more gorgeous to look at. A group of shiftless 20somethings stuck in the mire and droll of existence without prosperity or prospect look to their town’s sole escapee as a coattail to ride to their own success, only to realize things aren’t always what they seem to be. LEO caught up with Deuce.

LEO: What’s the inspiration for the movie?
Chuck Deuce: The obvious influences are (the mid-’90s movies) “Kids” and “Clerks,” but I was really looking up to and drawing from “Death of a Salesman,” “Glengarry Glenn Ross” and “The Iceman Cometh.” It was originally going to be a play, and “Iceman Cometh” was the original idea, with 30somethings in the new millennium, a single-set play.

LEO: What drew you to “Iceman”?
CD: I just saw a common theme in the dialogue and story that I was seeing in Louisville — with myself and others holding these dreams and goals but not having the means or the drive to accomplish them. I thought it was a great story to tell. I don’t think a lot of my generation has read Eugene O’Neill’s play — maybe (seen) the movie, but not (read) the story itself.

LEO: Rappers making movies is so 1998. Why you?
CD: While trying to plan the stage version, I realized the technology of editing and recording visuals is akin to recording audio, that so long as you get a good performance, you have everything. Anything else can be worked out. So why not give it a try? Worst-case scenario, it doesn’t work out, but the effort was made, and that can’t be taken away. I consider myself more of a storyteller than a rapper or a producer, and this fits for stories I can’t tell in a hip-hop context. I don’t want to be confined to 16 bars.

LEO: Introduce us to the characters.
CD: These characters are all perspectives of my personality. Brandon is always on the lookout for his next get-rich-quick scheme. The work between idea and prize at the end is his greatest weakness. Victor is Brandon’s sidekick and can’t get ahead because he’s constantly distracted by women. Marcus is an older friend of those two who used to be them but let his dreams fade. He’s reduced to a petty drug dealer. Claire believes she deserves better than her lot in life but isn’t willing to work for it. Her arc provides the emotional weight of the story.

LEO: What were your biggest lessons from the making of the movie?
CD: Really, the community effort aspect blew me away. The movie would have never gotten off the ground without the owners of Cahoots, Mag Bar and Ultra Pop providing the locations; Eric Snider offering to finance it just based on a single conversation; Little Heart Records and Louisville’s hip-hop elite offering royalty-free music. Louisville’s business community came together for one idea to come to fruition. That’s huge for a city with a reputation for not helping each other out creatively.