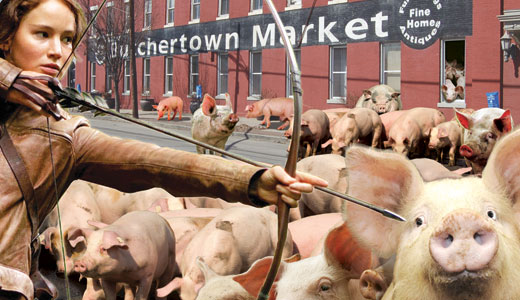 Oscar winner and Louisville native Jennifer Lawrence was summoned last weekend to help her hometown win its battle with swine infestation. The JBS Swift plant in Butchertown was the site of the war between man and pig, as hundreds of pigs scheduled to be slaughtered by the bacon makin’ company escaped and overtook the city.

After three days of the hogs going hog wild throughout Butchertown, Downtown and the Highlands, the mayor had no other option but to launch the J-Law bat signal, which shot a beam of light through the Louisville nighttime sky that could be seen as far away as Alaska. Lawrence saw the signal from her Hollywood Hills studio apartment and booked the first flight to town. After stumbling only three times through the airport, she and her bags made it within five hours.

Armed with the bow and arrow she stole from the set of “Hunger Games,” Lawrence went right to work with the Louisville Swine Swat Team, shooting the wild beasts with tranquilizer arrows that made the pigs count sheep so they could peacefully be converted to bacon. It took Lawrence and the LSST three days to catch the runaway livestock. One pig remains missing but is feared dead. Lawrence was carrying the animal across the Second Street Bridge when she tripped on the sidewalk and accidentally flung it into the Ohio River. More than 12 human injuries have been reported, and property damage is still being tallied.

“It was the least I could do for my city,” said the actress. “When I saw the bat signal, I didn’t really have a choice — I don’t have curtains, so it, like, shot right into my living room. I’m going to Gerstle’s to celebrate, if anyone is interested in joining. Go Cards!”