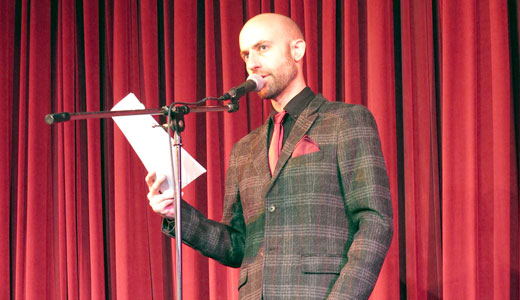 Jeffrey Cranor and Joseph Fink’s podcast “Welcome to Night Vale,“ a bi-monthly community news broadcast from a fictional town, has skyrocketed to popularity since launching in June 2012, spawning a level of enthusiasm rarely seen with podcasts. Fink, a longtime podcast devotee, recalls, “I just knew I didn’t want it to sound like the stuff I was already listening to. So out of that came the idea of a town where all conspiracy theories are true, and we went from there.” The show draws on noir and supernatural elements, with Cranor and Fink listing playwright Will Eno, filmmaker David Lynch and writer Deb Olin Unferth among their influences.

LEO: When you started, did you imagine having this kind of popularity?
Jeffrey Cranor: (long, laughter-filled pause) Nope. That was not on the horizon at all. We always thought we had something good, but we never went into this looking to be “successful.” Making art is a terrible investment if you’re trying to make money. You’ll fail a lot, and then you’ll probably fail more. The most important thing is to just make something you really like. Because even if you never make any money off of it — and I spent a long career making art I constantly lost money on — you’ll find yourself just doing it because you like it, and that’s awesome.

LEO: You have a very imaginative fan base. What has that been like?
JC: It’s exciting. We’ve never concerned ourselves with, or really enjoyed, writing detailed descriptions of the characters, so it’s been fascinating to see people’s interpretations, either through fan art or cosplay. I’ve never done experimental theater in downtown New York and afterward had somebody run up to me and say, “Will you sign this? Also, I made this picture of you.”
Joseph Fink: Overwhelmingly, the audience for podcasts tends to be men 18-40, whereas ours is younger and largely female. Hopefully, by bringing in a different audience, we’ll start to get different kinds of people producing podcasts, too. I would love everyone to start from the same place we did where you go, “Ok, let’s find something nobody else is doing and do it.”

LEO: What has the experience of touring and the live shows been like?
JF: Fantastic and really fun. Our fans are super nice and receptive to what we’re doing. If you listen to one of our podcasts, it’s this very quiet vibe; with the live shows, the audience brings so much energy to the room and (narrator) Cecil (Baldwin) feeds off that.

LEO: Do you think it’s an easy show to jump into, or do you have to start at the beginning?
JC: My hope is that if somebody started with a middle episode, over time you would learn all of these stories. We’re not beholden to the season format. There’s information in the early episodes that will help you understand what’s going on now, but there will always be new stories introduced and old ones wrapping up.
JF: With the live shows, we often get people where this is their first introduction to “Night Vale.” We really try to write the live shows so even if you don’t know the concept of “Night Vale,” you can still get the story of it and enjoy that.