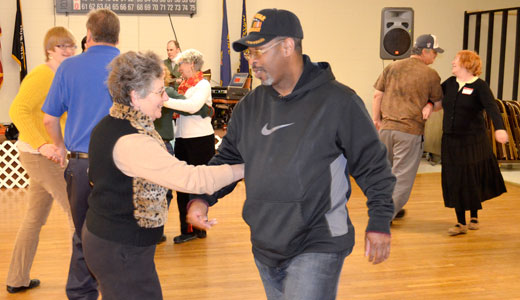 Over the sound of a fiddle, Deborah Denenfeld’s voice breaks through loud and clear: “Now promenade!” With the instruction, the group breaks the large circle they had formed with their hands and pairs off — well, except one couple. Somehow, they’ve been separated from one another. The woman, a newcomer to all this, flails her arms and spins around in search of her partner. When she finds him two couples down the line, she lets out an excited squeal and runs over to reclaim her rightful spot.

The group erupts in giggles.f

“It’s so much more fun when we screw up,” Denenfeld jokes. “We all laugh.”

It’s been said laughter is a cure for the things that ail us. Others say the same about music, dance and camaraderie. Denenfeld is a firm believer in the healing power of all of these things, and believes their power is multiplied when married together.

That’s why Denenfeld started Dancing Well: The Soldier Project, a 10-session community dance group for veterans with Posttraumatic Stress Disorder (PTSD) and Traumatic Brain Injuries (TBIs). Although it’s purely recreational and not part of a licensed therapeutic program, members say it helps veterans who struggle with reclusiveness, physical touch or other issues.

“I’m not used to socializing,” one veteran admits to me during a break. “Here, they’ve been very accommodating. I never thought I would dance, but I love it."

His partner for the night is a volunteer who picks him up from his home near the veterans’ hospital and drives him to AmVets Post 9 in Germantown, where each of the sessions is held.

This inaugural installment of The Soldier Project only consists of eight veterans, one of whom doesn’t consider himself a veteran because he never served in war. Four-dozen volunteers have signed on to help fill out the “sets” needed for community dance, play live music and set up the snack and drink table. Most of the volunteers come from the close-knit dance community, which also meets here on the third Thursday of every month for an old-time square-dance social.

“You can’t tell who’s a veteran and who isn’t,” says Denenfeld, looking around at the participants, whose ages range from college-ish to the grey-haired retired. “It’s a great thing.”

The Soldier Project has its roots in a similar program Denenfeld held back in 2010, with a psychiatrist at Fort Knox who wanted to introduce dance to his active-duty military patients and their families. Questionnaires at the end of that workshop suggested all of the participants felt physically better, less anxious and more at ease around a group. After the success of that experiment, she decided to target veterans in the community.

It took Denenfeld years to gage interest, fundraise and set up up the nonprofit, which operates under the umbrella of the Country Dance and Song Society. The current 10-session program ends this week. She’s planning on holding one or two more in Louisville before codifying her curriculum and taking her program to other cities. (Atlanta and San Diego are frontrunners because of their veteran populations and active dance communities.)

She says she’s already gotten emails from people around the country asking how they can set up a similar group in their town. So far, she’s told them to wait for her to make mistakes first before spreading the cause. “That’s the vision, though,” adds Denenfeld. “Being able to train people, so we can get more boots on the ground in other places.”

Roosevelt Smith III, who served in the Army during the Gulf War, remembers a time when recreational activities like these were nonexistent for veterans. Veterans Affairs has been bureaucratically behind when it comes to acknowledging PTSD and offering well-rounded remedies. They’re getting better, he says.

Things like Dancing Well help by creating an atmosphere where people understand they aren’t being judged and can leave life behind. “When you’re in there, you’re having good, clean fun. I’m smiling ear-to-ear from beginning to end."

EDITOR’S NOTE: The original version of this article misspelled the name of the organization under which Dancing Well operates. It is the Country Dance and Song Society — not County. The original article also suggested that The Soldier Project is held in a rental hall operated by Danny Mac’s Pizza. The space is operated by the AmVets Post 9. Danny Mac’s is attached to their space, but is not the primary operator. We regret these errors.