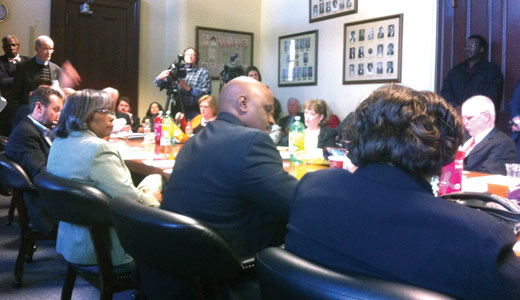 Since 2011, the Democratic Caucus of Louisville Metro Council has been besieged with scandal and infighting, particularly the ethics and expulsion trials of Councilwomen Judy Green and Barbara Shanklin. News from the past few weeks suggests that such drama may be there to stay.

In last Thursday’s Democratic Caucus meeting, a fight that has been brewing for weeks spilled out in front of the media present. This fight originated in the Feb. 13 Caucus meeting, where the Caucus chair, Councilwoman Vicki Aubrey Welch, D-13, accused the staffer of an unnamed Council Democrat of campaigning to defeat one of their colleagues up for re-election this fall, saying this was against their rules and grounds to be kicked out of the Caucus.

Councilman David James, D-6, says Welch was referring to him and his staffer Wanda Mitchell-Smith, but has not received any information from her about evidence she’s received in her investigation. James repeatedly pressed Welch for information at last Thursday’s meeting, to no avail.

This meeting occurred shortly before Jefferson County Attorney Mike O’Connell sent a letter to Attorney General Jack Conway stating that James must quit his law enforcement job at the University of Louisville, as such a position is “incompatible” with also being a voting Council member, as he swore an oath to two offices. James strongly disagreed — his lawyer threatened to take legal action against O’Connell for unfairly targeting him — arguing that this is political retaliation due to James supporting O’Connell’s primary opponent. James made several votes at the Council meeting later that night.

Thursday’s drama followed news broken weeks earlier by WFPL that the FBI is currently seeking information from Metro Council on possible misconduct by one or more of its members. The FBI has spoken to several Council members, as well as Janice Rucker, who has filed several complaints with the Metro Ethics Commission against Council President Jim King, D-10, in recent months, alleging that King cast several votes he benefited from financially.

King strongly denied the merits of those complaints in his response to the Ethics Commission, with his lawyer recommending that Rucker be prosecuted for harassing him. The Ethics Commission will decide whether to go forward with Rucker’s complaint at their next meeting on Thursday.

Is the recent targeting of James and King related? Many are trying to piece together the dearth of facts surrounding these matters, but the whispers all over city government is that they go hand-in-hand. Supporters of Jim King say that James is behind the ethics complaint and FBI investigation into him, while supporters of James say that his recent targeting is retaliation sent down on high from King due to his belief that James has it out for him. Both King and James deny such theories, as Council Democrats continue to soil in their own bickering.

At Thursday’s Democratic Caucus meeting, Welch proposed amending their rules to add staffers of Council members to those prohibited from campaigning against fellow members, holding the Caucus member accountable for their staffer’s actions.

In the ensuing discussion on the amendment’s merits, James repeatedly pressed Welch to reveal both who she is investigating and what information she has uncovered. To the dismay of James and those who have covered the controversy over the past few weeks, Welch says that no such investigation exists, as she’s just waiting for information “to fall into my lap.”

“There is no investigation,” said Welch. “There’s no one hired. I am just looking for information from our community. It’s out there now. And people are bringing me things every day.”

Welch described the information given to her — the details of which she has not provided to James or to LEO’s open-records request — as hearsay, saying, “At this point, there are several, several sources of second-hand knowledge.”

While Welch says there is no investigation, Caucus spokesperson Tony Hyatt repeatedly referred to the fact-finding mission of Welch and Caucus staff as an “investigation” when asked about its details after the Caucus meeting on Feb. 20.

Councilwoman Attica Scott, D-1, recently came forward saying she originally brought information to Welch that people informed her James’ staffer Mitchell-Smith was badmouthing her, but no one has provided information that either her or James were working to defeat her. While it’s questionable whether speaking ill of a Caucus member is technically “campaigning” against them, Caucus rules clearly do not mention staffers.

Asked after the meeting if there is a “witch hunt” against him, James replied, “One could say that, and I don’t think they’d be wrong in saying so.”

The proposed amendment — which drew mixed support among the Caucus — could be voted on at their next meeting on March 13.

Asked if the controversy surrounding Thursday’s Caucus meeting — which was unusually covered by members of the media focused on the James-O’Connell battle — is a sign that Council Democrats are in disarray, Hyatt replied, “I would say it would appear that way publicly, yes. I’m not going to say that we’re in disarray, but it would appear so. It’s been a tough 12 months, going back all the way to February of last year (the Shanklin trial).”

The Metro Ethics Commission will decide whether to proceed with Janice Rucker’s complaint against Councilman King on Thursday, or dismiss it as King recommends. LEO obtained a copy of both King’s motion to dismiss, as well as Rucker’s response to King’s motion.

King’s attorney wrote that two of Rucker’s complaints filed are for alleged violations that occurred more than a year ago, arguing that according to Ethics rules, they are too old to be considered and should be dismissed. He also argued that all three complaints filed — centered around King allegedly benefiting financially from zoning votes — are factually inaccurate and completely without merit.

Rucker replied last Thursday with a request to dismiss King’s motion because it was submitted prematurely, and if the Ethics Commission chooses not to dismiss it, extend the time allowed for her to respond.

Rucker tells LEO that the deck has been stacked against her throughout her attempt, saying she has been treated differently than the persons who brought the original ethics complaints against former Councilwoman Judy Green and current Councilwoman Barbara Shanklin, and now is being bullied by threats of prosecution for bringing forward her complaints.

“They talk about the politics in New Jersey being corrupt,” says Rucker. “They’re trying to make me feel like I did something wrong. Who does the Ethics Commission really work for?”

Rucker says she doesn’t know Councilman James and was not prodded to file her complaints by anyone, saying that when it comes to such complaints, some people are treated differently than others.

“The law does not say, ‘Because you have an affluent zip code, your bank account has a lot of money in it, that you are above the very law that you want everybody else to be held to,’” says Rucker. “The law protects all of us.”