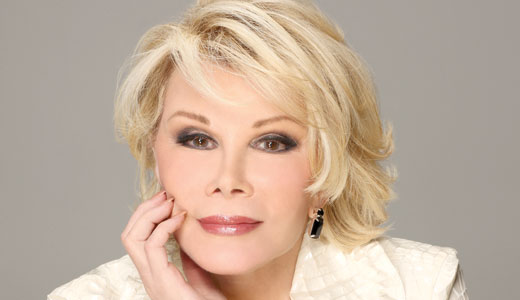 Joan Rivers needs no introduction. Our interview took place in mid-February, in the midst of Hollywood’s award season. She didn’t give up any inside gossip — especially the fact that, after being banned from “The Tonight Show” since 1986, she would return for Jimmy Fallon’s first night, one week later. We were just happy that she was warm, friendly and funny.

LEO: Have you been dating lately?
JR: No, I closed the hotel about three years ago … I lived with a man for nine years, and he died. You reach a point that you go, “OK, that’s it, I’m really not interested.” If you say to somebody, “Tell me about yourself,” you’ll be dead before they even get to college.

LEO: So, who are you wearing?
JR: I’m always wearing — even though I hate them — Chanel shoes. They’re the most comfortable shoes in the world. Around the house, I wear very much what I wear on “Fashion Police,” but just simpler.

LEO: Do you shop for yourself or use a stylist?
JR: I love to shop for myself. I never get a chance to do it … I buy a lot when I buy. But I have a stylist that brings the things I wear on “Fashion Police,” and it’s usually pretty well sorted out. He’s been doing it for 15 years, so I trust him totally. And he doesn’t laugh when you get undressed.

LEO: What if you’re telling a joke at the time?
JR: Oh, that’s very funny.

LEO: Jennifer Lawrence is from Louisville — everybody loves her everywhere except you. Why is that?
JR: No, no, no, I think — let’s start from the beginning. Jennifer Lawrence is a terrific actress. I saw her in “Winter’s Bone” — we’re not discussing acting. We are discussing that when we said she looked good on “Fashion Police,” she said she loved “Fashion Police.” And the minute we dared to say we didn’t like one of her dresses, she began to knock us and tell us how terrible we were. So that’s why I’m not a fan of Jennifer Lawrence, even though I’m a tremendous fan — I think she has amazing talent.

LEO: Jay Leno has finally left, Jimmy Fallon’s coming in next week — how do you feel about that transition?
JR: I think Jimmy Fallon is so smart and so good. I think he’s going to be amazing, and he represents a whole different generation, and I think you need that. I never found Leno funny. I found him very, very goyish. And I truly never watched the show. I would either watch Letterman or Kimmel. So, for me, that he’s left — I didn’t know he was there.

LEO: How much material do you get from other people? How much do you come up with on your own these days?
JR: The majority is my own because it just has to be. It’s truly how you look at things. But especially “Fashion Police,” you cannot … you’ve got to have other people and other eyes looking with you. “Fashion Police,” I would certainly say 60 percent is me, 40 percent is them. But the act is certainly 80 percent, 90 percent me. But if you’ve got a good joke and you said it to me, I’ll say, “Thank you, god!” I’m going to use it.

LEO: Have you found any other controversial topics lately that have inspired you?
JR: Thank god for Woody Allen! You wait for these things; otherwise, what is there to talk about? Nothing.

LEO: What happens when it’s somebody who’s actually a close friend of yours?
JR: When somebody is a really close friend, you try to keep it out of the act. But, again, the act comes first for me. If somebody is paying to see me, my allegiance is always to my audience … They made plans, they bought tickets, they hired a babysitter, or they cut classes. Nobody has come not to like it, not to have a good time, and so I always make sure they have a good time.