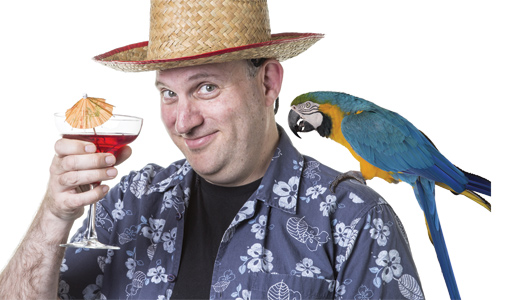 Retired teacher Lawrence Beatty has found a new purpose in life. “Living on sponge cake, watching the sun bake” is how he describes his mission. He spent part of last night blowing out a flip-flop, probably by stepping on a pop-top. Beatty also enjoys mornings spent strumming his six-string on his front porch swing. Though his adult children worry about his health, former students and other interested parties can find Beatty daily from 4-8 p.m. at Big Al’s Beeritaville, a bar located within walking distance of his home. He says he likes the bar, which he describes as “filled with old men in tank tops,” because it’s a good place for checking out “chiquitas” (women, in this case), “real beauties, Mexican cuties.” These women, he says, dream about weight loss and wish they could be their own boss. He tried spending time at another local bar, but it wasn’t the same — “I don’t know the reason I stayed there all season,” he notes. “I’ve got nothing to show but this brand new tattoo. How it got here, I haven’t a clue.” Some people claim that there’s a woman to blame.