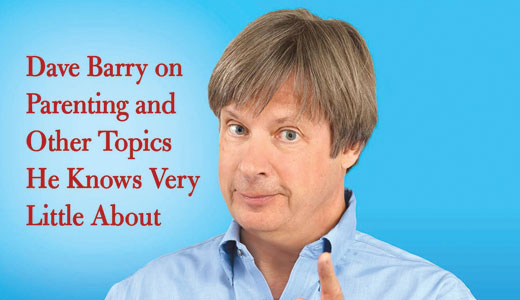 It’s been four long years since humorist Dave Barry put out a book of essays, which is nearly unforgivable to most of his fans who grew accustomed to reading his thoughts weekly in a now retired syndicated column, which LEO ran from the day we started. One of my first jobs here at LEO was to copy edit and format the syndicated content, and each week I was one of those fans who looked forward to Barry’s humorous insights on life, death, human excrement and everything in between.

Luckily, it’s time to laugh again with his latest essay compilation, titled “You Can Date Boys When You’re Forty.” He tackles everything from fatherhood and grammar to “death math” and Justin Bieber. I caught up with him last week while he was passing through the Lincoln Tunnel (no joke).

LEO: How did you come up with the topics in the book?
Dave Barry: The title essay I came up with because of my daughter, when she hit puberty — which there should be a cure for. (It’s) just sort of an older-dad reaction to that, and then I had to go to a Justin Bieber concert and wrote about it. I read “Fifty Shades of Grey” and was puzzled by that phenomenon. It was just stuff I thought was interesting.

LEO: I was actually at an airport while I was reading your essay on air travel, and I sadly found most of it to be true — especially when you said airlines board by income level, and that turning off your cell phone doesn’t apply to some people.
DB: Some of the essays, all I’m doing is saying, “This is actually what happens.” I don’t find flying a particularly reliable way to get anywhere. I tell myself that it used to be better; I’m not sure it was ever any good. I don’t think we’ve taken giant leaps forward from the Wright Brothers.

LEO: What’s your writing method like?
DB: I’m painfully slow and insecure. I’m always thinking, “This isn’t funny, this isn’t funny, this is never gonna be funny.” It can take me a long time to be happy with a single sentence sometimes. I think that’s kinda the nature of humor. You really generally don’t have a point. You’re just trying to make people laugh, think of a joke and then another joke. For me, that takes a while.

LEO: The essays in your new book revolve around aging, fatherhood, traveling, life’s annoyances and facing mortality. If you were 20 and compiling a book of essays, they’d be vastly different. What do you think some of the chapters might be called?
DB: For one thing, I hope there’d be nothing about fatherhood! If I was 20, the essays would probably be called “Partying,” “Partying, “Partying,” “Music” — I was not a particularly serious human being when I was 20. I was in college playing in a rock band. I’m guessing I would have written about that — if I could remember any of it. It was the ’60s.

LEO: What makes you laugh?
DB: Life in general. I find the federal government to be immensely humorous.

LEO: Speaking of, which one will happen first nationwide — legalized marijuana or gay marriage?
DB: Well, they both seem to be happening at the same time, which is fine with me. On Monday I will be in Colorado, but I won’t be partaking in any marijuana because it’d be the world’s sleepiest book tour. You kinda know they’re both going to eventually be everywhere, and I think most people are fine with that. It’s almost like we’re letting the law catch up with how most people feel anyway.

LEO: What are you drinking these days?
DB: I’m mostly a beer guy, although I love a good vodka gimlet — I like the way they look and the way they taste, and it looks sophisticated, like you actually know what you’re doing.

LEO: How would you like to be remembered?
DB: I don’t know how I’d like to remembered, because if I’m gone, I really won’t care. I know how I will be remembered, though. I’ll be remembered as the person partly responsible for the popularization of Talk Like A Pirate Day. In 10 years, everybody will forget everything else I ever did. But 100 years from now, on Sept. 19, people will still be talking like pirates. It’s my legacy!