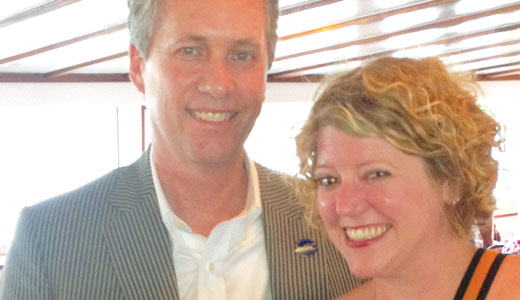 Hey, it’s me again. The girl who always bothers you for a key to the city. We’ve rubbed elbows on the Belle of Louisville during the Great Steamboat Race. Remember? You even came to the Back Door once and sat at my table when you were first running for mayor. I shared my chicken wings with you. I voted for you. Remember?

Well, I’m not here to bug you about the damn key again. In fact, I’ve grown. I’ve got new goals, and it’s about time I let the old ones go. You’re dust in the wind, my friend. I don’t want the frickin’ key to the city anymore, so don’t even think about handing it over! I wouldn’t want the responsibility. Nobody trusts me with keys anyway, so why would I want that much power? It’s just too much pressure on me at the moment. I’m running a free newspaper in 2014 — I have enough pressure.

However, I do have a list of things I would like from you, Mr. Mayor. I’m like a drunk frat boy at 3 a.m. who won’t let go the idea of stuffing my pie hole with 12 Cool Ranch Doritos Locos Tacos. Why do I want these things? Why not? I’ve gotta channel my desperate yearning-for-a-key feelings to something else tangential.

First off, I’d like to round up everybody who fails to use a turn signal and ship them to Oldham County. We don’t have time for that nonsense. I’d like a constitutional ban on the phrase “It is what it is.” It is what what is? What fucking is it? Say what you mean!

Sorry about that outburst, Mr. Mayor. I’m passionate in my desires.

I wouldn’t mind having my mug on the side of a building like you did for Diane Sawyer and others. If I can get mine up there before Jennifer Lawrence’s, that would score you some bonus points. I’d like my own bridge built over the Ohio that connects straight to Rich O’s in New Albany. Can you put the exit somewhere on Grant Line Road? I know you’re working hard on one bridge right now — so what’s one more? I’d like my own TARC bus for when my friends and I go bar-hopping on the weekends. If we could rename it BARC — Bar Authority of River City — that’d be great.

I have a few notebooks filled with ideas on how we can make Louisville the next New Orleans, so I’d like an hour of your time for discussion. Maybe we can meet up at the Back Door and you can pay off my tab.

I think that’s about it — until I think of more things that would be equal in value to a key to the city. If you’re on board with this, I’ll have my people call your people names. And then we’ll draft up an action plan.

Sober Texts of the Week
• It is what it is
• Do you wanna watch a movie or get drunk?
• It’s Kirsten, not Kristen
• Grease 2 is the shiz!

Send your mundane texts to [email protected]. My blog is at barbelle.leoweekly.com. Word.