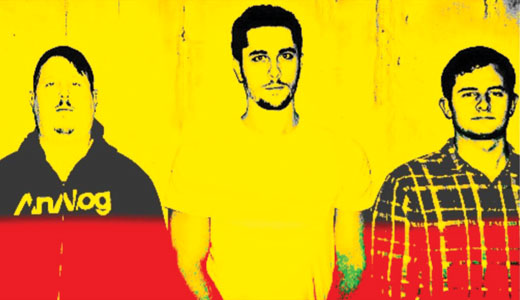 The Instruction released their debut album, Failure By Design, in the summer of 2009. Its follow-up is coming … eventually.

Though the band released an EP online last year, work on the sophomore album, Monster Maker, has been more challenging. A release date in late summer is hoped for now. Most of the recording is finished, they say, but there’s still more work to be done before it can be consumed.

This time, they hope for a vinyl release, as well as a digital version. Why vinyl? “I don’t know, to be honest,” singer/guitarist Blake Sakal laughs. “I like the artwork that goes along with it. For ours, I think it’d be cool … it’s been so long since we’ve released a record, it’d just be cool to hold a vinyl copy.”

“It gives you a nostalgic medium to go back and make a piece of art all the way around,” says bassist Jeremy Stein.

Sakal and Stein are the original members left. “To keep our name out there and play live, a lot of times we’ll spend time teaching the new guys the songs,” says Stein. “Then, slowly get into the songwriting process.”

They’re slow writers. And “we might write seven bridges to the same song and then not use any of them, and it takes us another year before we come up with something we actually like,” Stein says. “We like to perfectionize everything we come out with.”

Teaching their old songs has helped them see how they’ve grown, Sakal says. “You appreciate things more. As far as the first record goes, we spent, I think, seven days total on the entire nine songs — including mix, everything! It’s almost like a live record, with a bunch of kids who didn’t know what they were doing.”

Taking time has allowed for new sounds, incorporating a banjo and a theremin borrowed from Wax Fang.

“There’s never a bad time to make a record,” Stein says. “You just can’t hold it up as the best thing you’ve ever done, because you never know what you’re going to do next.”